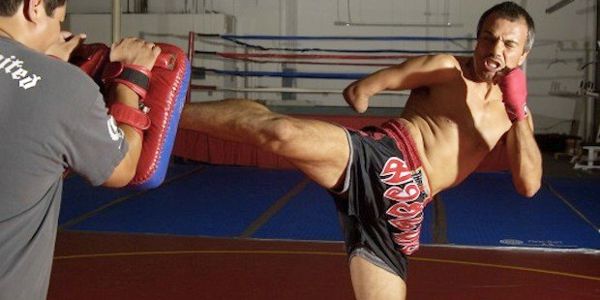 In 1974, Baxter Humby was born in Winnipeg, Canada. He is known as “The One Armed Bandit” because he has no right hand. His hand and a portion of his arm just below the elbow were amputated at birth, after becoming entangled with his umbilical cord.

He holds Black Belts in both Taekwondo and Sik Tai.

His interest in sports led him to take up running at age 11 and martial arts at 17. He ran for the Canadian National Track Team in Barcelona, Spain in 1992 and in Berlin, Germany in 1994.

He won the Canadian Super Welterweight Kickboxing Championship in 1996, and then moved to Los Angeles, California in 1997, to pursue a professional kickboxing career.

He currently trains with Muay Thai World Champion Maurice Travis and has a fight record of 53-10-1.

Films
In 2004, Baxter Humby traveled to China to star in the film “One Arm Hero”. It was produced by martial arts film star Carter Wong (Big Trouble in Little China) and directed by Li Man Sing.

Baxter Humby participated in the film Spider-Man 3. He took Tobey Maguire’s place in filming a fight scene between Spider-Man and Sandman. Humby helped deliver the intended effect of punching through Sandman’s chest.

He worked as a stunt double for Tobey Maguire in the film Spider-Man 3, during a fight scene in which Spider-Man punches through Sandman’s chest.

Humby played the role of Eduardo Romero, a corrupt Mexican official, on the television series The Shield.

He was featured in the music video of the song “Renegades” by X Ambassadors.

Baxter Humby is the only man in the world to win world titles with only one arm.