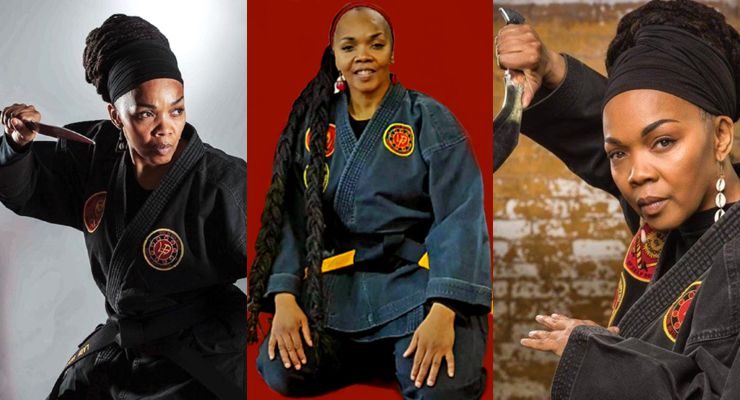 Lady Sensei Chisom Gerry is an NRA Certified Range Safety Officer and self-defense instructor under Chief Lateif Dickerson for the New Jersey Firearms Academy. He background includes more than 8 years in Behavioral Health as a Psychiatric Emergency Response Team member and is highly skilled at crisis prevention and management. She has de-escalated at thousands of clinical interventions and trained clinical staff in the use of verbal and non-verbal de-escalation skills, and non-violent physical interventions.

Lady Sensei Chisom Gerry’s beginner workshops teach self-defense as empowerment and a holistic part of health and wellness. Having begun her training in her mid-forties, she believes that it is never too late to learn how to take care of one’s self and learn the fundamentals of personal safety. Her workshops are thoughtfully designed to teach the mind as the primary weapon and how to increase safety options. Women can expect to learn situational awareness, verbal de-escalation techniques and practicing where and how to strike targets to disable an opponent.

Lady Sensei Chisom Gerry has been a speaker for 20 years in the public and private sectors as an entrepreneur and educational consultant. She inspires others with her own amazing transformation. Her journey from a domestic violence victim to an instructor is a powerful testament to her warrior spirit, and to the healing power of the martial arts. Lady Sensei Chisom Gerry presented her autoethnography titled,” From A Black Eye To A Black Belt: Training Makes The Difference” at the 2017 Martial Arts Studies Conference held at Cardiff University in Wales, Great Britain.

She discusses the philosophies which propelled her, what it is like to be a mature student, training and overcoming barriers as a female practitioner. She shares a colorful, thoughtful and compelling view of her experiences with audiences across the country and the world.

Lady Sensei Chisom Gerry has been recognized as an “Ambassador Of The Arts” and as an advocate for women in the martial arts, for their safety and self defense. She is the recipient of several hall of fame awards; of them all, she says that her greatest rewards come as a result of being an every day person, being able to role model for girls and women from all walks of life. ​

In 2018, Lady Sensei was honored by the office of Brooklyn Borough President Eric L. Adams, as a “Distinguished Woman of The Martial Arts” along with members of the Women’s Martial Arts Network. Lady Sensei also became the first woman to be honored with the 2018 Masters and Mentors Award by the Urban Action Showcase International at HBO/Cinemax Headquarters in New York City. She has also been selected to be a presenter at the 5th Annual Martial Arts Studies Research Conference at Chapman University, Orange, California in May 2019.

USAdojo - May 8, 2017
We use cookies to ensure that we give you the best experience on our website. If you continue to use this site we will assume that you are happy with it.OkRead more