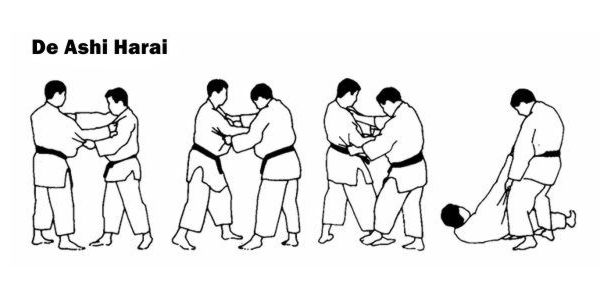 Just as in boxing, where it is said that “Everything works off the jab”, in Judo it might be said that “Everything works off the foot sweep” known as De Ashi Harai. De Ashi Harai is a basic, first principle throw, executed by coordinated movements of the sweeping foot, the body and especially the arms, all working together to upset an opponent’s balance and “cut him a flip” through the air. At worse, it serves as a “spoiling tactic”, when employed repeatedly during a match or encounter, making the opponent constantly think about, and be prepared to parry the technique. This, in turn helps to keep him on the defensive and unable to very effectively launch his own attack. Just as, in boxing, a good jab serves much the same purpose. Muhammad Ali had arguably the best jab in boxing and off of that one punch was frequently able to launch his own blindingly fast combinations which left opponent after opponent befuddled and battered and often, beaten.

De Ashi Harai sets up so much else for the skilled judoka. Throws using other techniques and parts of the body “flow” from this one basic, “beginner’s” throwing technique. Once the opponent becomes preoccupied with countering, or at least avoiding this technique, he is prone not to see in time something else in the way of an attack coming at him. In Jiu Jitsu, for example, we sometimes use “nukite” strikes, often delivered to tender areas such as lymph glands to achieve the same purpose. Just as the boxer’s jab always stuck out into his opponent’s face, serves to blind his opponent to what’s coming next. De Ashi Harai thus becomes one of those beautiful attack techniques which are dangerous enough under optimum circumstances to “take out” an opponent all on its own, or to blind and confuse the opponent to such a degree as to render him vulnerable to some other finishing technique.

Many years ago, during the Fall East Coast Promotional Shiai held in 1970 by the Tidewater Judo Club, in Norfolk, Virginia at our home Dojo there, the Norfolk Central YMCA on West Butte Street, I saw the Dutch National Judo Champion defeat one of our club’s own black belt instructors with this basic beginner’s technique in the opening seconds of their tournament bout. The match was over almost before it began. That’s how effective De Ashi Harai can be when employed with practiced skill. It was an amazing sight to see. Shocking, really. And left a lasting impression on me that a technique need not be complicated to be effective. Nor must it be something only a Grand Master can master and employ. Like boxing’s jab, this fundamental foot sweep is a staple of the judo arsenal that all judokas begin learning from the time they move forward from “learning how to fall” to learning their first basic package of throwing techniques. And as with everything else in Life, “practice makes perfect.” Sensei Don Schneider liked to tell us back in those days at the Tidewater Judo Club that, “The only difference between a white belt and a black belt is practice.” And so it is.

All boxers learn to jab early-on in their training. Some, like the great “Smokin’ Joe Frazier” go on to largely eschew the jab during their careers. Instead they wade into an opponents punches (often jabs!!!) and take tremendous punishment just to land some of their own licks. For the powerful “sluggers” in boxing like Joe Frazier, this works well. But for most, it is a recipe for disaster. Even for those who make it work for them, this basic non use of the jab results in them sometimes taking a fearful beating just to win a fight. Other fighters, like Ali, Larry Holmes and Sugar Rays Robinson and Leonard, and Tommy Hearns, utilize the jab to set up everything else that they do. It makes Life much easier for them and minimizes, to a great extent, the amount of punishment they absorb over a career.

That is why learning such “basic” and sometimes apparently “boring” techniques such as De Ashi Harai are so very important to any martial artist who truly aspires to “master” his practice of the martial arts. Who aspires to one day become one of those favored few generally acclaimed to be a “Grand Master” And why those who simply just want to learn how to defend themselves should also have the patience to master such fundamental and basic techniques before going on to higher levels of learning.

But for the master, or for the beginner, De Ashi Harai and other throws like it are essential techniques to master in the quest for competencey OR excellence in the arts.

David Stainko - March 26, 2018
We use cookies to ensure that we give you the best experience on our website. If you continue to use this site we will assume that you are happy with it.OkRead more