Personally I think I’m on the deadliest man alive list. My natural ability, my conditioning, my physical prowess and my superior training puts me in contention for this coveted title. Not!!!

Okay, since I’m not in the running for deadliest man alive, who is? Back in the day it used to be Count Dante, or so he told the world. Of course that self imposed title was a marketing tool. So who fills the deadliest man alive slot today? Several names come to mind. Kelly McCann is one. Marc ‘Animal’ MacYoung is another. And then there’s Danny Inosanto, Larry Tatum, Paul Vunac and several other individuals that I can name. Please don’t be offended if your name isn’t included. Those named were used for illustration purposes. 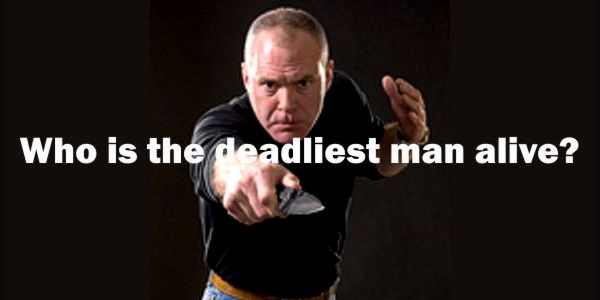 Who cares about someone’s physical prowess? The deadliest man alive question only comes into play if you plan to contend with someone one on one. That only happens in muggings and barroom brawls. No-one does that any more. Everyone who knows me knows that I’m a martial artist and in a physical confrontation I’d probably knock their hat around backwards or twist off their head. No-one’s going to engage me in hand to hand combat which is good because I’m of the same mind set. I don’t believe in fighting. I believe in resolving physical confrontations. Fighting involves two people going heads up. That means that both have a chance of winning. I don’t do that. I’m going to set the stage so I know I’m going to win. That doesn’t involve allowing you a fair chance. This isn’t high school football we’re talking here. This is life and death combat. I grew up in the inner city of Chicago. What we used to call the ghetto. Issues are resolved by drive by’s, surprise attacks and gang attacks. If someone is stupid enough to stick a gun in my face I’d take it from him and pistol whip him If I don’t shoot him. I don’t worry about that. I worry about the sniper or the back stabber. The ones who stack the deck in his favor.

Back in the day I’d destroy anyone who threatened me. I don’t deal well with threats. I may be able to deal with it when you launch your future attack or I may not. That depends on what you do and how you do it. I know I can deal with you here and now. I’m not going to walk around looking over my shoulder waiting for your surprise attack. You promise me a butt whipping then you owe me a butt whipping and I want it right now. That is if you’re man enough to deliver on your promise.

So let’s back to the question. Who is the deadliest man alive? If we want to be honest I’ts probably the President of the United States because he heads the most powerful nation in the world and he has his finger on the button.

What I’m trying to say is this; we need to get over ourselves. Who’s the deadliest man alive? Who’s real, who’s fake? What systems are authentic which ones are so much B.S. Who’s tougher than who (my kung fu is stronger than your kung fu. Humph, my teacher is greater than yours. I’ll beat you with two strikes). Let’s be realistic here. Most of us aren’t ready to deal with a trained soldier. Many of us wouldn’t survive two days in a federal or state prison and most of us aren’t ready to face a seasoned street fighter. I’ve worked in prisons and on psych wards that housed the ‘criminally insane’. I’ve seen what those inmates and patients were capable of and believe me my brother, you aren’t ready to deal with that. A sane man will hesitate before he’ll cut your throat. That’s the only advantage that the sociopath needs.

Most of us aren’t as dangerous as we think we are. In my lifetime I’ve known of several really good martial artists that were cut down in the streets. None of them died in a one on one street fight. They were just taken out in the most effective and economical way possible.

Why do all of this in fighting and posturing? It is my understanding that the empty wagon makes the most noise. Those that brag, threaten and belittle others do so because of their own insecurities. Who cares if you underwrite my theories or believe in my system? I’m known and supported by my peers; those that believe in me. If you don’t fall in that category, oh well. That’s your loss, not mine. Just understand this. Unless you’ve grown up the way that I have; unless you’ve had to survive in the worse streets of a major city; unless you’ve had to be involved with real military combat, you aren’t ready to deal with me or anyone like me. If I felt threatened by you I’d deal with the situation but you can rest assured that it wouldn’t be in one on one combat. I’m not trying to prove who’s the better man; I’m resolving a conflict and solving a problem in the most convenient way possible. Does that put me in contention for the aforementioned title? I think not. I’m not dangerous. I’ll never attack you nor do you harm. Not unless my life and personal safety or the well being of a loved one hangs in the balance. I’m not a sociopath.

My brothers, instead of trying to destroy each other’s reputation and question one another’s credibility we should be trying to support each other. We’re family by way of a common interest. We belong to the same fraternity. None of us has a monopoly on physical prowess. None of us has the perfect infallible system. In the end, the man makes the system; the system doesn’t make the man. Your system being founded by so-in-so or headed by whoever doesn’t make you a better fighter. So in the martial art community who is the deadliest man alive? Who is top dog? Who’s the best fighter? Who’s the toughest? Who cares? Hopefully we’re too mature to act like a couple of grammar school kids. “My daddy can beat your daddy.” Grow up. Ain’t none of us more dangerous than any of the rest of us (ghetto speak). All of us are brothers under the skin. Let’s get over ourselves and be the best martial artists that we can be collectively and individually.

By the way, my daddy can whup yo daddy.

Understanding the Roots of a Martial Arts System