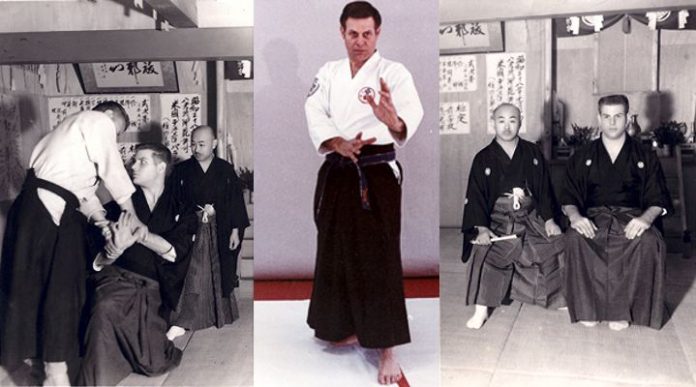 Sad news. Dai Shihan Dennis Palumbo passed away on September 12, 2014. Dai Shihan Palumbo was the owner and head instructor at the Budo Ya / Hakkoryu Dojo in Aurora Colorado that invited a young man into his Dojo to do a Ninja demonstration in the early 80’s. That young man was me. Little did either of us know that this demonstration would be so well received that the very next day he asked me to teach an ongoing class in the school. At first I was not keen on the idea, but he said he saw something special in me and knew I would make an excellent instructor. I reluctantly accepted and with his wisdom guiding my blade, I began my teaching career. I taught at the school for many years before moving on to open my own facility…. and now, over 30 years later, I am still teaching that same art. He may not have been my martial arts Sensei, but he was ultimately responsible for setting me on a very specific path. My memories of him will remain… the respect and admiration I have for him untarnished – Godspeed. ~ Mark Grove

Mr. Dennis Palumbo began his formal training in the martial arts in 1958 in Yanagi Ryu Aiki Jujutsu. He entered the Air Force and upon his first overseas assignment to Japan, he began his study of Hakkoryu Jujutsu with Shihan Hideo B. Abukawa. in November 1963, Dennis Palumbo attained the rank and title of Shihan. At the time He was only the 5th American to be awarded this title.

Mr. Dennis Palumbo traveled back and forth between the United States and Japan for many years, continuing to study Hakkoryu, Shotokan, Shudokan, and Goju-Ryu Karate.

In 1970 Mr. Dennis Palumbo was requested by Soke Okuyama to return to the Hombu for advanced training but was unable to attend because of Air Force duties until almost 10 years later. He formed the Hakkoryu Martial Arts Federation in 1974 while stationed in San Angelo, Texas.

Memories of the Honbu by Dennis Palumbo

After more than 50 years of dedication to the martial arts, Dai Shihan Dennis Palumbo passed away on September 12, 2014.

A Memorial Service will be held on Saturday, September 20, 2014 at 10:00am at the Eisenhower Chapel located at the former Lowry Air Force Base, 293 Roslyn St, Denver, CO 80230. Final resting place will be at Riverside National Cemetery in Riverside, California on September 26, 2014 @ 12:45pm with full military honors from the Air Force.