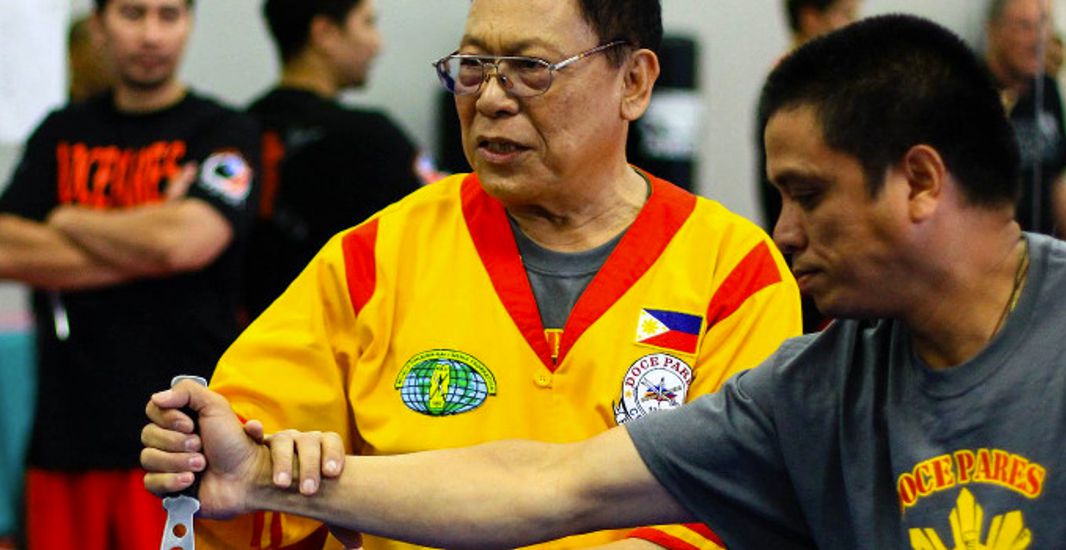 Dionisio Cañete belongs to the second generation of the famous martial artist, the Cañete brothers of Cebu City, Philippines. He is the youngest son of GM Eulogio (Ylong) Cañete, the principal organizer of Doce Pares, who headed the organization since its founding in 1932 until his death in June 1988.

Dionisio Cañete began his lessons in the Filipino Art in 1946 at the age of eight from his father and brother Iluminado, the eldest of the five children (4 sons and a daughter) of Eulogio and Irenea Aventurado.

He studied under GM Felimon “Momoy” Cañete and later with GM Ciriaco “Cacoy” Cañete, both brother’s of his father. He also trained with GM Vicenter Carin and Maximo Cañete.

In 1950, during the Golden age of Boxing in Cebu, Dionisio was attracted to the sport and for five years regularly sparred and trained with several good amateur and professional boxers at that time.

In 1957, together with his brothers, Diony was introduced to Kodokan Judo.

In 1960, immediately after his election as one of the officers of Doce Pares, the rules on the acceptance of students and membership were liberalized. They started to promote and develop Arnis as a wholesome spectator’s sporting event.

In 1975, Dionisio Cañete initiated the formation of the Cebu Eskrima (Arnis) Association. All major Arnis clubs in Cebu banded together for the first time. Dionisio succeeded in organizing and banding together all the top Arnisadors, Diony, in effect, “civilizing” the fighting-oriented Masters and bringing them together to co-exist for the sake of the Filipino Art.

Dionisio Cañete helped organize the following events which he also participated in:

Note: The above two tournaments were made possible through the all-out assistance and initiative of Arnulfo Cuesta, Fred Bandalan, Edward Abinsay, and Leo Fernandez.

August 11-13, 1989
First World Eskrim Kali Arnis Championships
Cebu City, Philippines
It was during this tournament that the World Eskrima Kali Arnis Federation (WEKAF) was organized. He was elected Charter President

In 1989 Dionisio Cañete was selected as Sportsman of the Year by the Sportswriters Association of Cebu (SAC).

During these tournaments he prepared the tournament rules and designed the appropriate protective gear.

In 1969 at the age of 22, he passed the Bar Examinations and became a fully-fledged Lawyer. In February 2017 Lawyer Dionisio Cañete petitioned the Supreme Court to be stripped of the title of “attorney” that he said had brought shame because of widespread corruption perpetrated by his brothers in the legal profession.

He petitioned to be removed as an attorney because of his “utter disappointment” at corruption being perpetrated by “my brothers in the legal profession who are members of the prosecution and judiciary.”

Diony has lessened his active participation in various activities related to Arnis. However his private gym in Cebu remains a popular training place for students and instructors, especially those coming from other countries. He sees to it that the visitors are well attended to and are assured of learning what they want to know about the art. He still makes himself always available to render service to WEKAF and NARAPHIL.