I don’t want to spend the life I have left just squeaking by, I’m going to “go for it”. When I say “squeaking by” I’m not talking about poverty and to “go for it” is not my idea of fame and fortune. I’m talking about the belief I have, that everyone has something to contribute to life. And it comes down to, first of all, believing this to be true and then realizing that each one of us is included in that word, “everyone” and the next thing to do is to discover what it is you have to contribute. After that, find a way how to contribute what it is you have that no one else can contribute the exact same thing.

For me, it’s having the assurance that I’ve lived fully awake to the deeper meaning behind the purpose each story my life was passing on to me. There were lessons buried deep within the mere passing of time, describing what I did or didn’t do, under a particular set of circumstances.

My experiences haven’t been unique or earth shattering … I haven’t flown from castle to castle across France in a hot air balloon, I haven’t walked away after killing everyone in a gun battle where I was greatly outnumbered … I haven’t produced a work of art that touches the hearts of millions with a message that could change their lives.

I have just been me, did what I knew to do, and then I tried to write what resulted from those experiences. I’ve had someone tell me once, “That story you wrote … you know, the one about your last night at the Crystal Palace, well, that’s me, man… exactly me. I know what you meant. I was just like that person you wrote about… I stuck that story on my refrigerator and I read it again and again, and everyone that comes over, I have them read it too”

To hear someone say all that about something I wrote… that’s when I realized I connected with the deepest part of another human being. Other people have read the same story and was left with a puzzled look on their face. But, that’s alright, if I don’t connect with everyone, I’ve already been shown the connection and so I know there will be others who will relate to what I write.

And there it is – “relationship”, I guess that’s what I want most. 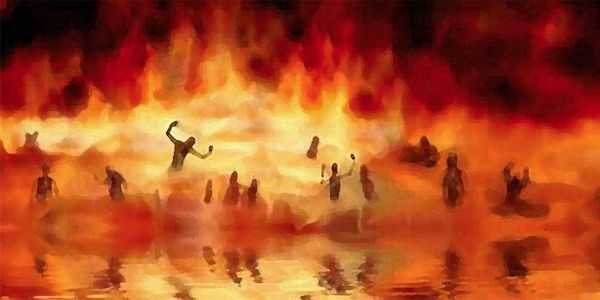 My idea of hell …
is to be by myself as the attendant of a one pump gas station on a secondary, no-longer-traveled road in the middle of the desert… I have a job but I make no money. In my ‘off-time’ I continue doing non-consequential tasks to take my mind off the fact that I am living by myself in the middle of the desert with absolutely no effect on another living being.

Everything I’ve done in my lifetime is crammed into the over-filled garbage cans in the rear of the station. I am proof that what I’ve done led nowhere. Not one car leaves the main highway and drives by this run down station and I’m more than alright with that. I quietly resign myself to hide from the world so my failure in living won’t be seen and, maybe someday, may very well be forgotten.

What a shame it is to be ashamed of life.

God tells me there will be a bus coming down this road one day. And now that I’ve seen hell, I’m ready to use this bus ticket I have in my hand.

I’m going to do something worth doing or not do anything at all.

And if I fall short of my mark… at least I will go down swinging. I’m going to write my thoughts and if they suck, so be it. I’m not going to limit my writing to what I hope some reader will think is cool. I want the deeper meaning in what I write to be felt by the reader even if not immediately understood or appreciated. I don’t care if what I write is initially dismissed on the surface as long as it sticks in the readers mind and maybe one day adds a sliver of whatever it is that will make life a little brighter.

I want to believe that I lived for a purpose greater than taking, without anything to give.

Maybe that’s my way of connecting to life so that I can believe that I was here.