The Paying It Forward concept has a firm foundation in history. In the movie, Pay It Forward starring Helen Hunt and Kevin Spacey, a concept was brought to light that wasn’t revolutionary, but many people thought it was.

Actually, Ben Franklin described it in a letter he wrote to Benjamin Webb in 1784, in which he wrote about his intention to help Webb by lending him some money. However, he did not want to be repaid directly. Instead, Franklin hoped that Webb would meet an honest man, at some point, in need of financial help and pass the money along to him.

But, paying it forward is not just giving money you don’t expect back. It’s also in what you do, and how you give of your time, and how your energy can be used to serve someone else’s need. The term paying it forward could mean that someone would perform some generous act, quite out of the ordinary, for someone they don’t even know. A kindness done without expecting anything in return. And it’s done for the other person’s sake, no ulterior motive, nothing in return required, other than the expectation that the person who was helped might help someone else down the line.

Appreciate life, by giving to others… asking nothing in return.

In short, saying the word appreciation is one thing, but showing appreciation is a hard step for many of us to follow. It’s not uncommon to wonder what a person is up to if they show an unexpected kindness towards us, or if they should go out of their way to sacrifice something of theirs so we don’t feel left out. We might even think that those people have a political gene most of us lack. 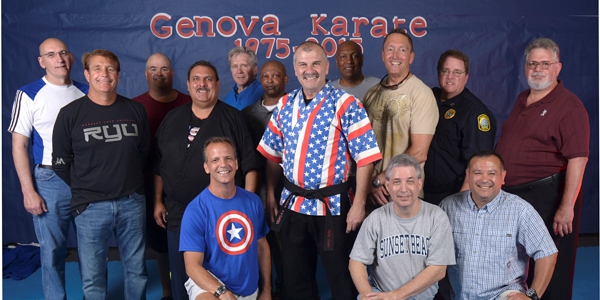 I don’t know why it can’t be understood that many of those people we assume are up to something… simply love people, love life, and have given-in to responding to life by serving others. And serving others was what Mike Genova did this last weekend… at the 40th Anniversary of Mike Genova’s Family Martial Arts.

Mike had every reason to toot his own horn, after all; he had reached forty years of Martial Art service within the South Carolina community and has been a Champion in Sport Karate throughout the world. For forty years Mike Genova has been ranked high in the hearts and minds of his peers; and, in almost every Martial Art Magazine Mike Genova has been included among the Best of the Best of all time.

But instead of talking about himself, or sitting back and resting on his own laurels, Mike spent this day, Saturday May 30th, tooting the horn of everyone else. He gave a constant flow of acknowledgment for the success made by the 250 Martial Artists who were invited to attend the gathering. Mike used this milestone in his own lifelong accomplishment to pull people together so that he could celebrate their achievements. He readily gave recognition of who they were, and what they have achieved in their lives.

All these Black Belts came to Mike Genova’s karate school in South Carolina to pay tribute to him. But, hour after hour, as each Black Belt arrived, Mike would turn the crowd towards them and yell out, “Ladies and gentlemen, Art Waltman is in the house”… or “Pete Manchee has arrived… ” or simply announce, “Ladies and gentlemen… Keith Vitali.” Mike would then give a list of all that person’s accomplishments. And, with each acknowledging call-out, all the guests stopped what they were doing, stood up and turned toward the Black Belt who was arriving and applauded, and then everyone walked forward to greet that person whose presence was being honored.

Nothing scripted, nothing planned – just all from the heart… and genuine.

The biggest event of the day was yet to arrive.

Mike had arranged a surprise for Bill “Superfoot” Wallace.

Forty Years ago, Bill Wallace mentored Mike Genova and since then, has continued to do so anytime the opportunity arose. And through the years, Mike has followed the pay it forward concept by giving to his students what Bill Wallace had given to him. Much of what Mike became, can be tracked back and attributed to the time Bill spent with him in those past forty years. And now, Mike wants it known that the only reason Mike had the ability to pay anything forward, had a great deal to do with what Bill Wallace has done for him.

Bill Wallace knew nothing of the 250 Black Belts who were gathering at Mike’s school.

Bill came to town to teach a seminar at another school. But Mike Genova arranged a dinner for Bill the night before. And, then he enticed Bill to stick around in the morning by setting up a game of golf for him. So, with all this, Bill couldn’t refuse when Mike asked him to drop by his school before leaving.

When Bill arrived at Mike’s school on Saturday after his golf game, he was totally surprised.

A stage was set-up, music was blaring over the loud speakers, microphones stood ready, and huge banners reading Bill “Superfoot” Wallace hung on the building, inside and out. The tents, set-up in the parking areas, housed tables of dozens and dozens of large boxes of Little Caesar pizza and all the coolers were filled with water and soft drinks. A parking lot, the size of a football field, was cordoned off, police were directing traffic to alternate parking areas, and a hundred fans or more, plus hundreds of black belts, all gathered outside Mike’s school where Councilman Mo Buddero was on hand to make a formal welcome to Bill “Superfoot” Wallace, as he presented him with the ceremonial Key to the City.

Mike, congratulations on Forty Years of service to family, friends and community and thank you for being a shining example of paying it forward!