For the first time in my life it occurred to me that a man was not just a taller, older boy. A man had a spirit all together different from that of a boy and his outward appearance merely reflects what that inner spirit should be.

I will not tiptoe through this life just to make it safely to my death.

At twelve years old I had my first glimpse of manhood. It came to me when I saw a boy standing on the corner waiting for the light to change.

I don’t know how he did it.

I was amazed that he just stood there absolutely oblivious to the epiphany taking place. I never saw him before that day and I never saw him since. That was sixty years ago and I can still remember the feeling I had when this total stranger made me aware that I was destined to grow into something more than just a boy.

I didn’t know what a “childhood” meant. I certainly didn’t know the difference between a good or bad childhood. It never occurred to me that any other kid’s life was any different than my own. There were a lot of things I didn’t know at that age. But, I did imagine that somewhere in all those things I didn’t know, there was some critical information about life that was hidden from me.

So, I watched this boy carefully.

We were the same height and roughly the same build and I would have guessed we were very close to the same age, yet he appeared totally different than me. What I saw in him was something a boy was supposed to grow into; something you’re supposed to be after you’re a boy and before you can become a man. I looked him over close, up and down from head to toe, and I even leaned back a bit to do so, as I wondered why he looked to be so much more of a boy than me, and so much closer to being a man. I stayed a step or two behind him as we both waited for the light to turn green and I thought of a cocoon changing a furry little caterpillar into a butterfly. I imagined that I was still that caterpillar; but that boy, having obviously completed some form of metamorphosis, was closer to becoming the butterfly.

For the first time in my life it occurred to me that a man was not just a taller, older boy. A man had a spirit all together different from that of a boy and his outward appearance merely reflects what that inner spirit should be. That was the first time in my life that I realized that one day I was to be a man. But, what is that magical process that turns a boy into a man? How do I get from what I am to what that other boy appears to be?

I tried in vain to understand this feeling I had… of me, being a man someday. And why did looking at this boy make me realize I was getting close to making that change? And then, I saw it. I saw what I was looking for; I saw the one very noticeable sign that made this boy appear to be closer to being a man than me. It was that he wore the tight blue Levis that had the little red tag on the back pocket that said, “Levis” and I was wearing a loose fitting pair of baggy Jeans.

My eyes were opened that day to something I didn’t understand, but just the same, I obeyed the message I was given. The mystery was solved and my entrance into manhood was discovered and I began my journey by wearing a pair of Levis. But, I also judged my friends by the absence of that little red tag on their back pocket. After all, a man only hangs out with other men and so I actually looked; literally, physically looked, for that red tag on the back pocket of another boy’s jeans before considering him cool enough to be accepted as my friend. 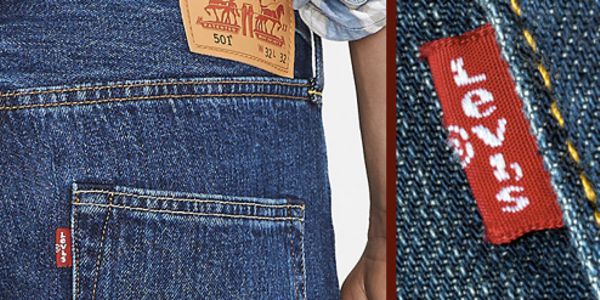 And thus began my belief that various stages of manhood could be found in the different labels to which a man would fight to own. After the red Levis tag I went after my manhood again and again, but each time I chose a different label. They ranged from being a wise guy clown in school, a woman’s opinion of me, how smart I was, how much money I made, or how many fights I started, who was scared of me, how many times I was kicked out of school and how many times I was thrown in jail.

These labels were the notches I wore for all to see, and so I quickly lost sight of the quest to become a man, and I began to seek the labels that I thought told others I was a man. There were some people in my world who read, in those labels, what I wanted them to think of me. But I never found the label that told me, I was the man I wanted to be.

Could it be…the man, for which I was looking, might not be found in a label? I searched for manhood everywhere “out there”, and never once did I consider the fact that I might already possess what I’m looking for, inside of me. But, there it is. There’s always a catch isn’t there. Even if I did already possess it, and even if it was somewhere inside of me, I would still have to find it, wouldn’t I?

You might say that in my book, “I Stand Convicted”, my journey was to find a way to “grow up” and I described my bizarre behavior as what I thought would make me a man. You see, that’s what I wanted; I wanted to be a man. I wanted to be a man so much that I was blinded by my very desire to be a man. I tried to circumvent the process of growing up by replacing it with images of what I thought would make me appear grown up. It wasn’t that I was just lazy or that I didn’t want to grow up. I didn’t grow up because I didn’t know how to grow up.

People don’t choose to make the wrong decisions just because they’re wanting the worst that life has to offer. Many of the wrong choices we make are made simply because we don’t know what the right ones are. By its very definition, you don’t see the consequences to your behavior until they’re on you.

My heart goes out to those who fell to “If I knew better I would have done better”. Because when I fell, I found the worst in me, and I saw the worst in the people around me. But I saw something else, too. I saw something I chose to hold on to: I saw greatness, I saw warmth, and I saw compassion, I saw extraordinary kindness, and I saw brilliance where no one would ever expect to find it.

I saw that the best that is in the worst of us is as grand as anyone’s best could ever be, and so I believe everyone of us has a wealth of good to work with. I have faith in the decency of the down trod. I see unrevealed greatness brewing everywhere. There is hope for our mistake riddled lives because I see something magnificent that is yet to be refined.

Even now, I’m tempted to turn back from this place I’ve reached in life and yell, “Watch out, it’s a trap, we took a wrong turn. Go back. Before it’s too late; go back.” But, we know it’s too late to go back. We’ll never make right what we’ve done wrong. Nothing can be undone.

But the beauty of it all is that nothing needs to be undone. You don’t have to go back to start over and it’s never too late to begin again. Your starting line is right where you are, right here … right now. When I grew up late in life I was old enough to stand back and understand what I was watching when I saw the boy in me become a man. Because of that, I believe in us old kids, and I know that we can still “grow up”- no matter how old we are. It’s never too late.

One can’t say it’s a trip worth waiting for, because in a perfect world I can only imagine it must be better to grow up when we “should”. But, although the trip itself can be painfully difficult, and at times, disappointing, it is also revealing, instructive and enlightening on all matters connecting our lives to our purpose for being here.

Cursing the revelations, because of the pain they bring us, turns our attention from their educational value and reduces the usefulness within these messages God would have for us.

With, how I’ve lived my life, and in every joyful and painful minute in it, is embedded the message God has given me. I choose to quit wasting time on frivolous matters and self seeking journeys to nowhere. I choose to look at God’s word, in every way He writes to me, every day. And, for my own pleasure, I seek time to walk and talk with God, and enjoy the time He would spend with me. Time is the very gift God gave us, to spend as we choose… spend it wisely.

I believe that if we will ever be able to say we lived at all; “we will have to fill the unforgiving minute with sixty seconds’ worth of distance run,” Rudyard Kipling went on to say, “and then, you’ll be a Man, my son!”