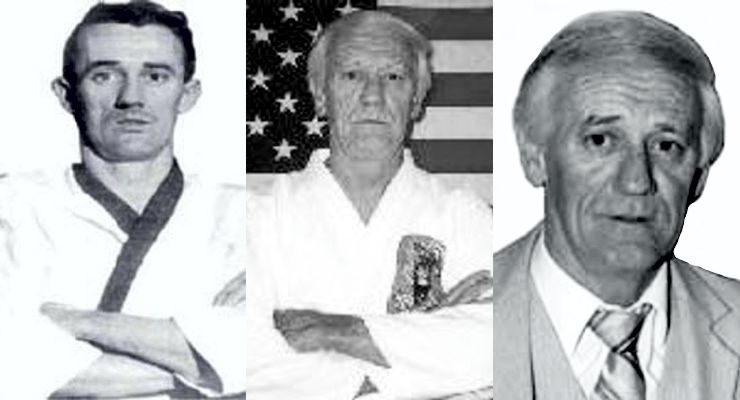 Don Nagle was born in Jersey City, New Jersey on April 5, 1938. As a teenager in high school he began studying Goju-Ryu Karate. He enlisted with the United States Marine Corps when he was 17 and completed his training at Paris Island, South Carolina on December 3, 1955. He then went to Camp Lejeune for Infantry Combat Training. His Military MOS 0121 was Personnel Clerk. He was stationed on on Okinawa, the largest of the Ryukyu Islands off the coast of Japan. He was  assigned to the 3rd Marine Division at Camp Courtney and later was transferred to another company and served his country from July 11, 1956 to September 9, 1957.

Having studied martial arts he was temporarily assigned to the All Marine Judo Team stationed at Camp Lejeune. In the fall of 1956, while on Okinawa, he began to study Isshinryu Karate with founder Tatsuo Shimabuku at the Kyan Village dojo and he continued his studies until he left the Island in 1957. While training with Tatsuo Shimabuku, Don Nagle won the All Okinawan Karate Championships as a white belt fighting the islands best Black Belts. After winning the championships Tatsuo Shimabuku awarded Don his own personal Obi (belt) and promoted him to Sho-Dan 1st degree Black Belt.

When Don Nagle left Okinawa in 1957 Tatsuo Shimabuku awarded Don Nagle his 4th degree Black Belt. Returning to the states in 1957, Don partnered up with then Sergeant Ernie Cates at his martial arts school located at 220 N. Bridge St. Jacksonville, North Carolina and this became the first Isshinryu Dojo in the United States.

Don Nagle was discharged from the Marine Corps on September 11, 1959 and he returned home to Jersey City and began teaching Isshinryu at the local YMCA and then opened a dojo at 524 Mercer St. Later he received his 5th degree Black Belt from Tatsuo Shimabuku from Okinawa. In 1964 Tatsuo Shimabuku visited Pittsburgh and Don Nagle was able to visit and trained with Shimabuku during his visit. In 1966, Don Nagle hosted another visit from  Shimabuku at which time Don was promoted to 8th degree Black Belt on December 15, 1966.

Don Nagle became a police officer in 1967 and was awarded as policemen of the year in 1970 and in 1997 he went on to become a narcotics detective. During his tenure as a police officer and detective he taught hand-to-hand combat for the department.

In 1972 Official Karate magazine recognized Don Nagle as a “Living Legend”. In 1974 Don Nagle was so well known that he was asked to promote “Karate Men” the first miniaturized version of a karate toy at the Aurora Showroom for the annual toy fair in New York City.

Don Nagle gave seminars, three of which were recorded between 1988 and 1992. The seminars took placce in Detroit Michigan, Cape Coral Florida, and Ontario, Canada.

In an attempt to unite Isshinryu, the United Isshinryu Karate Federation was formed by Don Nagle on April 19, 1991.

After Don Nagle retired in the late 1990s he was appointed to the US Marshall’s service in the security division. He considered being selected for this position as one of his greatest honors.

Don Nagle passed away on August 23, 1999 a day after heart surgery. He was only 61 years old. This was a great loss for the martial arts community.

USAdojo - October 12, 2011
We use cookies to ensure that we give you the best experience on our website. If you continue to use this site we will assume that you are happy with it.OkRead more