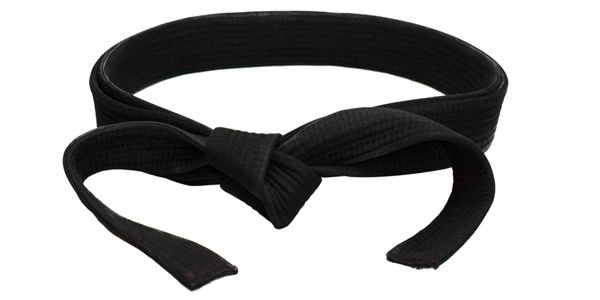 When earning a Black Belt is the ultimate goal, training often focuses solely on learning technique which can lead to a variety of unintended consequences.

Whenever I travel to another city or country, usually several times a year, I always try to visit as many different martial arts schools as possible. Over the years I have had the opportunity to train at a wide variety of schools throughout the U.S. and China, as well as a few in Canada and Thailand. While I truly believe that every school has something to offer, I have noticed a common misconception that causes a great deal of frustration, and occasional injury, for students of many styles. This misconception has to do with the meaning of a black belt. The perception that earning a Black Belt means mastery of the martial arts has created schools in which the martial arts are little more than a sport or form of exercise rather than a means of self defense and a way of life.

It is well known that Jigoro Kano, the founder of Judo, created the colored belt system to signify rank in the late 19th century. This system was then adopted by other Japanese and Korean styles and has since spread throughout a large number of styles, even among some that have not traditionally had ranks. This system worked well for much of the 20th century, when training focused on the development of skill, be it for self defense, the healing arts, or spiritual growth. But all that changed with the release of the Karate Kid in 1984. As children came to dominate school enrollment, the focus of training shifted from actual combat to the development of self control and discipline. Gradually, attainment of rank replaced development of skill as the primary indicator of progress and a Black Belt became the ultimate goal of training.

Today earning a Black Belt has become so central to martial arts training that a black belt is now often considered synonymous with mastery. Unfortunately, nothing could be further from the truth. It is not uncommon to hear stories of a Black Belt getting beaten badly in a street fight. My instructor has been present on more than one occasion when a Black Belt returned to their school and threw their belt down on the instructor’s desk in disgust, saying that it’s worthless after losing a fight to someone with little or no formal training. This is perhaps the most dangerous result of the misconception regarding the meaning of a Black Belt. The common perception that a Black Belt means mastery can lead Black Belts, as well as their students, to greatly overestimate their actual fighting ability.

But if a Black Belt does not indicate mastery, then what does it mean? When Jigoro Kano introduced the belt system, a first degree Black Belt was called shodan. Literally translated, this means first or beginning step or stage. The first step in mastering any particular style or system is learning its basic techniques. So all earning a Black Belt actually means is that a student has learned how to execute, or perform, all of a style’s or system’s basic techniques. However, execution and application of technique are two very different concepts. With proper instruction, learning how to execute a basic punch, kick, sweep, throw, lock, or choke is a fairly simple process. But learning the position, distance, timing, and angle necessary to apply, or use, a technique against an opponent trying to do the same to you is much more complicated. So much so that you can say earning a Black Belt is when the real learning begins!

If earning a Black Belt simply means that a student has learned how to execute all of the basic techniques, then how did it become synonymous with mastery? As mentioned earlier, over the last 30 years children have come to dominate enrollment and the focus of training has shifted from skill to character development, decreasing the need to learn how to apply technique. This is in addition to the question of whether children should learn to apply technique in the first place. There is also the issue of time commitment. Depending on the style or system, earning a Black Belt typically takes between two to four years. In today’s instant gratification society, how many students would schools attract if they knew that two to four years are just the first step? Additionally, there are situations in which Black Belts leave to open their own schools before they’ve learned how to actually apply technique. All of these factors have combined to greatly reduce the amount of training that occurs beyond the Black Belt level.

In the absence of training that goes beyond the first degree Black Belt level, earning a Black Belt then becomes the ultimate goal and eventually becomes synonymous with mastery. From a commercial stand point, this is not necessarily a bad thing. When a Black Belt is the ultimate goal, rank becomes the primary indication of progress. This allows schools to design their curriculums entirely around belt testing and promotions for which they can then charge additional fees. Some schools have gone so far as to divide the belt system even further, adding stripes which must be earned between each belt. While this system may work with younger students, it can create serious problems for teen or adult students who may need to know more than simply how to execute technique depending on what their goals are.

Training that focuses solely on learning to execute the techniques required for the next belt can create potentially dangerous situations when students don’t have the basic skills they need to execute or apply technique safely. I recently spent three weeks at a medium sized Brazilian Jujitsu (BJJ) and Muay Thai school in a large metropolitan area in the U.S. The head instructor, while not yet a black belt in BJJ, knew a lot of techniques. But during one class he attempted to teach a group of beginners, some in their very first class, how to execute a basic hip throw when most of them didn’t even know how to fall! A similar type of situation occurred during a Muay Thai class. The head instructor demonstrated a variety of striking combinations, including high kicks, for the students to perform while their partner held Muay Thai pads without ever teaching them how to hold the pads correctly. In either situation, an injury could easily ruin the school’s reputation and/or lead to a negligence lawsuit. Although the head instructor had himself trained under several well respected instructors, by focusing solely on technique he put the students as well as the school in jeopardy.

In addition to creating a safety issue during training, simply learning how to execute technique does not adequately prepare students who are interested in competing. Nor are students prepared if they are ever faced with a self defense situation. If a student does not learn the position, distance, timing, and angle necessary to apply a technique, they are left guessing as to what to do when faced with an opponent. Without this knowledge, most students attempt to use athletic ability, relying on strength and speed instead of position and leverage. While some students eventually figure out what works best for them through trial and error, the process leaves many students terribly frustrated because they don’t know how to apply basic techniques successfully. And as they try to use ever increasing amounts of strength and speed to apply a technique, the risk of injury increases greatly for both the student and their training partner. The BJJ and Muay Thai school that I visited had several students sidelined with injury, most of which occurred while they were rolling. A big reason for BJJ’s tremendous popularity is the fact that there is no striking, making it much less punishing than many stand up styles. This advantage is lost when students have to rely on athletic ability to apply technique.

The martial arts developed as a means for individuals to defend themselves against bigger, stronger opponents. When students have to rely on strength and speed to apply technique, training means very little and the outcome of a confrontation, whether on the mat, in the ring, or on the street usually comes down to whoever is bigger, stronger and faster. Many schools have embraced this trend, substituting fitness training for position, distance, timing, and angle work. It is now common to see pushups, sit-ups, and a timed run included in belt tests. This is in addition to the fitness kickboxing and boot camp classes which have actually succeeded in bringing adults back into martial arts schools. While aerobic and anaerobic conditioning is extremely important for competition, the outcome of a street fight is usually determined within 15 seconds of first contact, rendering fitness fairly irrelevant. By focusing entirely on teaching technique, many martial art schools have become defacto gyms.

Regardless of what aspects of training a school wants to focus on, to effectively and safely prepare students for self defense or competition, and even to get the most out of fitness classes, instruction that goes beyond simply teaching technique is necessary. Many skills can be easily incorporated into an existing belt curriculum, such as falls and rolls. There are also a wide variety of drills, both ground and standing, to help students learn how to apply technique. These can also be included with testing for different belts. Even the single most important factor in learning how to apply technique, which is footwork, can be developed through different means depending on the instructor’s experience and goals. Some means of developing footwork include stance work, forms or katas, and many, many drills. Whatever means an instructor chooses to teach footwork, it is without a doubt the key to moving beyond the Black Belt level, learning to apply technique, and mastering a style or system.

Finally, while footwork does make it possible to transition from execution to application of technique and advance beyond first degree black belt, focusing exclusively on technique to earn the next belt misses a much larger issue. Every style or system has different techniques that it prefers. But any experienced competitor will tell you that no matter how many different techniques they learn, in the heat of the moment they will usually rely on just a handful of techniques. Ronda Rousey’s use of the armbar is an excellent example. So mastery is not a question of how many techniques you know, but rather learning to apply a single technique in any given situation. Applying a technique in any situation requires understanding the principles behind the technique. It is these principles that allow a student to adapt to any situation. By focusing on principle rather than technique, the student is free to apply the techniques that they are most comfortable with, regardless of where the technique comes from. That is the difference between mastering a particular style or system, and becoming a true master of the martial arts.