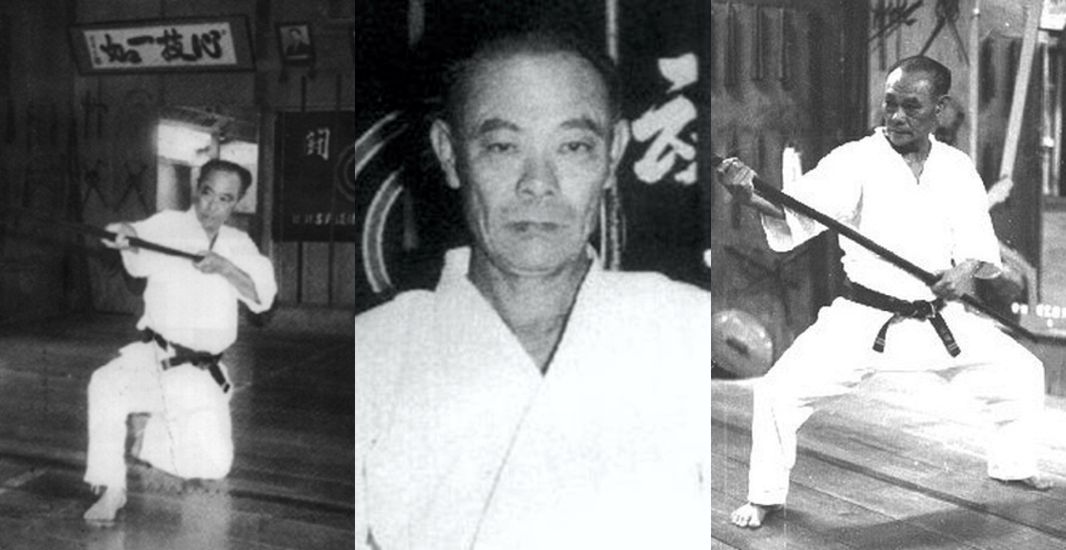 Eisuke Akamine was born in Aza-mura (village), Tomishiro, Okinawa in 1925.

In 1942, at the age of 17, he began the study of Yamani-ryu Bo-jutsu the graceful, smooth and powerful tradition of (the art of the 6 foot staff), the weapons system indigenous to Okinawa, under Higa Seichiro, a former student of Chinen “Yamane” Sanda (1840-1922), Higa Raisuke, Higa Jisanburo and Akamine Yohei. Eisuke Akamine  would learn Soeshi no Kon kata, Sakugawa no Kon kata, Shirataru no Kon kata and Yuniga no Kon kata from these early teachers.

In 1944, Akamine Sensei married Shizuko and shortly after, when he was 19, he was drafted into the Japanese army where he served for a year in Taiwan. When he returned to Okinawa in 1945 he was discharged from the army and in 1946 he returned to his native Okinawa where he continued to the farming of vegetables and sugar cane and continued to study of Yamani-ryu bojutsu.

Akamine continued as a dedicated student under Higa’s expert tutelage for seven years, until 1956. In addition to his studies under Higa, Akamine also received instruction from other students of Sanda Chinen, including Raisuke Higa, Jinsaburo Higa and Yohei Akamine. From his studies of Yamane-ryu Bo-jutsu, Akamine learned the staff traditions of Sakugawa, Shushi, Yonegawa and Shirotaru.

In 1959, Taira Shinken was teaching kobudo in a Goju-ryu karate dojo in Naha, Okinawa and he was told about excellent bojutsu teachers in the Kakazu section of Tomigusuku village. He went to Tomigusuku and discovered Akamine Sensei’s teachers and he studied  Yamani-ryu bojutsu with them. This was the first meeting between Taira Shinken and Akamine Sensei.

Eisuke Akamine became Taira Shinken’s senior student, and he was able to watch him organize the waza into a structured curriculum what would become Ryukyu Kobudo Hozon Shinkokai system. Taira Shinken also added a training element that would become part of the signature of his weapons system.

As Eisuke Akamine continued his studies with Taira Shinken, his teacher recognized that kobudo was effective but that it lacked the explosive power found in Ti. Taira Shinken realized that Kobudo lacked gamanku or the hip technique that gave the technique power.

Taira Shinken had a rigid, muscular physique and a permanent ankle injury so it was difficult for him to demonstrate gamanku for his students, but he wanted them to the technique so he asked Higa Yuchoku to help his students and infuse his system of kobudo with gamanku. Even after Taira Shinken’s death, Akamine Sensei would continue to seek Higa Yuchoku’s knowledge on using gamanku.

In 1970 Taira Shinken died from cancer and Akamine Sensei finished building the dojo and added traditional stacking windows for ventilation. Whe the dojo was completed he called it the Shinbukan to honor his teacher. Akamine Sensei’s original students came to train in the Shinbukan.

In the years since, the original building has been replaced by a more modern, three-story building which contains Akamine Sensei’s home, dojo and his daughter’s koto (string instrument) dojo. Little else has changed. Akamine kept the name, structure and goals of Taira’s organization intact.

Akamine Sensei taught waza and kata for all of the nine weapons of Ryukyu Kobudo Hozon Shinkokai which included bo (staff), sai (iron truncheon), nunchaku (horse bridle), kama (sickle), tekko (metal knuckles), tsuifa (millstone handle), eiku (oar), suruchin (weighted rope), and tinbe (shield and short spear). He also continued to research and this helped he and his students to discove kata that could have been lost.

Eisuke Akamine died on January 13, 1999 in the Nesabu section of Tomigusuku, the small village in southern Okinawa where he was born. He had only 14 first generation students will be forever known as a “teacher’s” teacher.