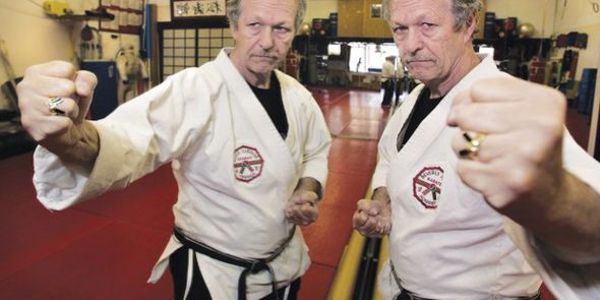 Emil Farkas, founder of the Beverly Hills Karate Academy, reflected in a mirror at the martial arts school that he established in 1970.

Hungarian native Emil Farkas’ martial arts training made him ‘Sensei to the Stars’ and he’s started a second career as a writer.

Emil Farkas is 64 years old, 5 feet, 8 inches tall and just 160 pounds. But you wouldn’t want to get on his bad side. Farkas is the founder of Beverly Hills Karate Academy and holds a seventh-degree black belt in karate, a fourth-degree black belt in judo and a fourth-degree black belt in jujitsu. “Not bad for an old man,” he says. Farkas has put his skills to good use, training Hollywood’s biggest names and earning the nickname “Sensei to the Stars.” His life is a world away from his childhood in postwar Hungary, where he was brought up by parents who survived the Holocaust. After the 1956 revolution forced his family to flee to a refugee camp, he eventually landed in Los Angeles, where a gig as the bodyguard for music producer Phil Spector introduced him to show business. He has trained the Beach Boys, Dennis Hopper and other celebrities, as well as some of L.A.’s top businessmen. He’s also the author of numerous books and screenplays – his latest, naturally, is called “Ninja Nanny” – and he recently started a martial arts-themed magic company. Farkas recently sat down barefoot with the Business Journal in his West Hollywood dojo to discuss his childhood, his courtship of Hollywood and why he gravitated to martial arts.