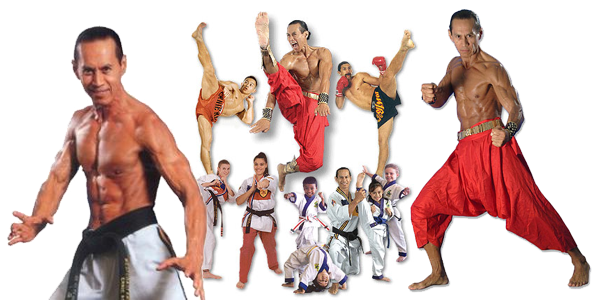 Ernie Reyes, Sr. was born into a large Philippine family in Salinas, California in 1947. in high school Reyes, Sr. was an All Star in football and basketball.

In 1967 he began to study Tang Soo Do under Moises Arizmendi and trained throughout Junior college. When he transfered to San Jose State University he began training in Taekwondo under Grand Master Dan Choi. From Choi, Reyes, Sr. learned the values of honor, loyalty, fmily and bravery based upon respect and discipline through traditional martial arts training. He trained hard and began competing and teaching for Grand Master Choi. He moved from point fighting into full contact Taekwondo and became the lightweight USA National Champion. 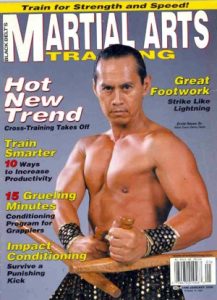 Reyes Sr. had a profound effect on the tournament circuit as he revolutionized kata competition and introduced creative musical forms into the American tournament circuit. His students were some of the best competitors at tournaments and in the early 1980’s he had 7 of the top ten black belt forms champions.

His West Coast Demo Team, which featured his young son, Ernie Reyes, Jr., traveled the country demonstrating martial arts with weaponry and aerobics becoming the number one demo team in the United States.

In he late 1970’s Reyes, Sr. began mixing other arts, including Remy Presas’ Fillipino stick fighting, boxing and kickboxing with his Taekwondo.

In 1982, Ernie Reyes Sr. and Ernie Reyes Jr. were spotted by a manager and producer from Hollywood and 6 months later the moved to Hollywood. Reyes, Sr. did not want to leave his students but he knew he was suppose to be with his son. In 1986, Ernie, Jr. was written inot the movie The Last Dragon and then Jr. starred in The Last Electric Knight, which lead to the tv series Sidekick. Reye’s Sr. became his sons best supporter and helped with fight sequences and choreography. Before filming the tv shows, Ernie Jr. was cast by Dino de Laurentiis in Red Sonja with Arnold Schwarzenegger and Bridgitte Nielson. Father and son starred together in Surf Ninjas in 1993.

Even while his sons career continued to move forward, Reyes, Sr. traveled back to his school to continue training his students. He and Tony Thompson founded Ernie Reyes’ West Cost World Martial Arts Association and the association grew to abot 35 schools.

Wesley Snipes produced the highest rated cable special of all time, TNT’s “The First Tribute to the Martial Arts Masters of the 20th Century,” which showcased some of the greatest innovators of the martial arts including Ernie Reyes. 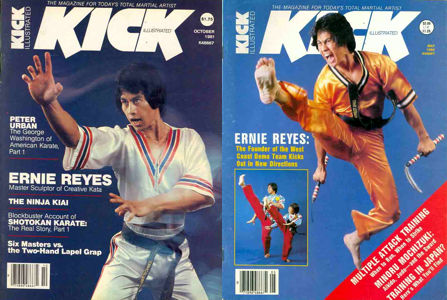 Kick Illustrated Magazine bestowed the title of “Master of Creative Karate”, upon Ernie Reyes for his mastery of unique martial arts instruction and creative choreography of martial art performances. Ernie Reyes has a reputation as a pioneer of progressive martial arts training in America, and Master Reyes has been featured in every national karate magazine in the world.

“I am first and foremost a martial artist, striving to reach the highest level of living, through the martial arts process. The Way – The Do!”

“I believe martial arts is one of the greatest gifts and treasures of life to create positive change in peoples lives. I am totally certain it is my noble calling in life.