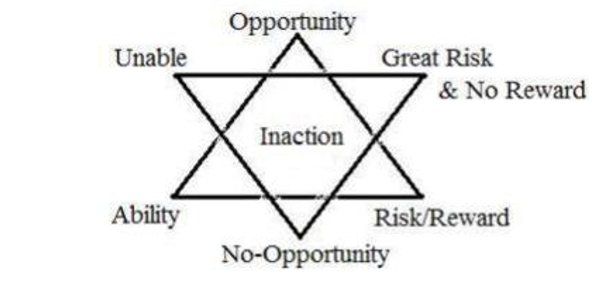 We often hear the phrase “fighting without fighting” in movies and books. This conjures up ideas from the mystic to the manic. The fact is no one has the same definition of what the phrase means. Some teach it to mean that your “aura” or your “chi” is so powerful others can feel your “inner strength.” All the mystical thinking aside, we all get “vibes” and those “vibes” can sometimes lead us away from dangers or conflicts. Whether those vibes are chi, ki, jing or just a subconscious mind relaying information on a level we can’t consciously understand, is beyond my level of understanding and I won’t comment on it. I do know, however, that there is a science to conflicts. 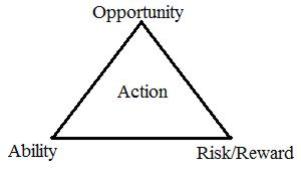 Any Action we do; whether it is reading a book, applying for a job or basically anything else that takes place, it happens because of three things; Ability, Opportunity and the Risk being worth the Reward.

Ability is your perceived ability to successfully take action. Its more confidence in yourself then it is actually a matter of excellence in your skills.

Opportunity is a matter of openings you give others, when Sun Tzu said to “First make yourself unbeatable” he was speaking of limiting opportunities.

The Risk has to be perceived as worth the reward and many times the mere temptations of an easy opportunity is enough to entice action even if the risk is too high or perceived ability is lacking.

All this creates what we call the action triangle; these three elements must be present or perceived as present for an action to take place. When we are talking about a crime; less violent crimes such as purse snatching, shop lifting, burglary and identity theft and so on all offer less risk for higher rewards. The natural escalation of violence which occurs under stress means that non-violent crimes are less likely to illicit a violent response if they fail. Where violent crimes, like armed robbery, assault, murder or rape often illicit a violent response as self-defense.

Now if we are to apply this understanding of the mental processes of action that take place the opposite is equally as true at preventing action. To make ourselves “unbeatable” as Sun Tzu advised, we must apply the action triangle under reversed conditions. 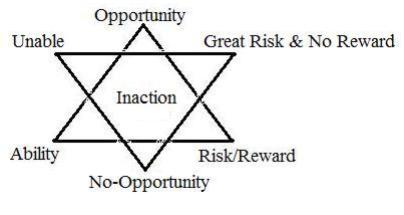 Human Interaction Theory:
Human interaction to danger or conflict with other human beings is not as simple as fight or flight and “freezing” occurs when the excited mind of the individual under stress is trying to process conflicting information such as “you have a right to defend yourself” conflicting with the lesson of “violence is wrong.”

Posturing: The projection of a threat display to either establish one’s strength and therefore their dominance of a select group or to assert that one is either too strong to be dominated, or at least strong enough that the risk is not worth the reward.

Flee: Retreating from a threat often means regrouping either psychologically or physically, many school yard fights have or posturing matches have been known to result in the loser getting their “big brothers” to pick on the smaller kid who “won.” Just as simple as fleeing can be an intelligent choice when confronted with a threat, in cases where such “threats” are a repeat performance in various environments, such as bullies in school or the work place or violent neighborhoods; retreat is often a precursor to escalation such as Columbine or VA Tech.

Fights occur where neither side believes in the strength of the others threat display, thus physical conflicts occur.

Submit: Submission is the conscious choice when you believe in the threat display of an aggressor and you surrender to their will. This is the action that an aggressor wants taken, where you allow yourself to be victimized for fear that you may be harmed in a worse way if you do not submit.

Now then, the “Star of David” also known as a “Six Point Pentagram” is simply a visual aid; do not confuse this with any religious beliefs or with some arcane significance. To “fight without fighting” we must fight psychologically. We must control the violence and redirect it or stall it outright. To do this we must understand where the threat is coming from and what type of violence is being used to threaten us. This article deals only with social-violence; violence or the threat of violence used to dominate others within a social group. Almost all violence experienced today is social in nature or begins as social violence.

A Parking Lot Accident: Baiting an Aggressor
As you are backing out of the parking space you were lucky to get at the front door to your favorite fast food place, you accidentally back into a car that was rushing behind you to cut into the drive thru line. As you put the car into park and get out of your car to assess the damage, you see and hear the other driver, a large and nonathletic man easily twice your size; getting out of his car while screaming obscenities and threats at you.

The Intelligent Answer is 1.: If you stand your ground and return a threat display you show that you are not intimidated and the lack of obscenities keeps the situation from escalating into something more than posturing. The stall of matching his threat display allows you to add the bait at the end of threat; which is giving your aggressor a means to save face without having to fight you.

A simple “Look if want to fight me over some paint that’s fine, we can go right here and now but I’d rather just calmly settle this like intelligent rational adults…” can do wonders. Now, by not fighting you are both intelligent, rational, adults sans the obscene threats earlier.

You Talking to My Girl (Guy): Feinting an Aggressor
Not everyone goes to bars and night clubs to meet the opposite sex and many times a bit of healthy flirtation can turn bad, especially if you are intoxicated and unaware. So you meet a girl (guy) at a local fair ground and you start with small talk and some casual flirting. A larger more fit person of the same sex aggressively shoves you and starts to threaten you for “talking to his (her) partner…”

This one is a bit of a tough one since they did put their hands on you and that can be taken as a threat to your safety. However, in this case 4.: since no real follow up assault was offered you would be hard pressed to legally respond with more than necessary force to “break contact.” Again the natural response is to meet threat display with threat display to not appear weak and invite more aggression. However, instead of offering a baited either/or scenario you offer a simple lie; “you didn’t mean to do it, you didn’t know and it is not your fault.” This defuses intent and makes you appear just as disturbed by the events allowing them a moment to sort things out and for you to make a quick get away.

Tough Guys: Cornering an Aggressor
Cornering is dangerous because the most dangerous animals are either wounded or cornered, so apply the strategy with caution. You have a pack of neighborhood toughs, trying to look cool for each other and show the world how tough they are. Alone they are kittens but together they are a pride of lions. These guys have gone from strutting around like roosters to harassing and even assaulting neighborhood kids and some older people. So how do you deal with them when the “leader of the pack” starts trying to approach your under-aged daughter?

As tempting as 1 is the best answer is 4.: once you have away from “gang” and without a need to do more than posture you can easily set him straight. More importantly you can follow up with a show of appreciation for your “understanding” in front of his friends so that he gets to maintain face; or openly proclaim his own weakness with the truth.

In every case you have to understand the natural flow of conflict between people; an aggressor will take action if you give them the opportunity, allow them to believe they have the ability and allow them to believe the reward is worth the risk. You must assert yourself, present a “hard target” for social violence, minimize the opportunities,show them that the risks are high with little reward, and hint at your ability to defend yourself so it is apparent. Asserting yourself is not some false bravado or tough guy routine; asserting yourself is displaying the ability to fight without the desire to fight, playing tough guy will just invite the bigger tougher fish in the sea to want to take a nibble. Being aggressive will just invite and draw attention from other people who are aggressive. Being assertive simply means you can be aggressive when you need to be aggressive and tough when you need to be tough; but as long as no one threatens you (giving you the opportunity to be aggressive and tough), you have no need to exercise the ability to defend yourself, making the risk of confrontation not worth the reward of using violence against you.

Finally, let me say that (again) this article deals with social violence and that these methods may be useful in dealing with “gray areas” between criminal-violence and social/combative violence, but they are not intended for that purpose.