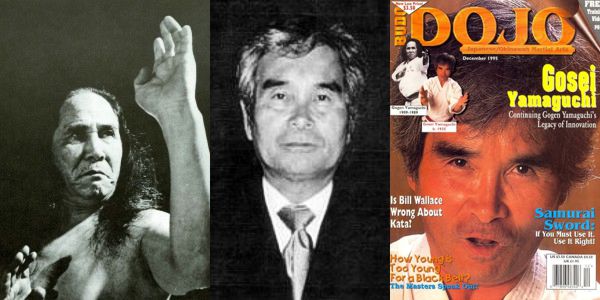 Gosei Yamaguchi was born on June 29th, 1935 in Kyoto, Japan as Norimi Gosei Yamaguchi, the eldest son of Gogen Yamaguchi who trained in Karate-Do. Gosei began his karate training at the age of four under his father. His father served in the Japanese military so Gosei spent his early childhood, from around 1939 to 1945, living in Manchuria China.

Gosei Yamaguchi earned the rank of Sho-Dan in Judo at the Kodokan which was nearby the home of his father. He was in high school at the time. While attending Takushoku University from 1952 until 1954, he studied Shotokan, Russian, and Commerce before he transferred on to Meiji Gakuin University which he attended from 1954 to 1956. He graduated at the age of 21 with a Bacholars degree in English Literature.

In 1965 Mr. Gosei Yamaguchi formally established the Goju-Kai Karate-Do, U.S.A and was appointed head of the association. At the time of its formation, the Goju-Kai Karate-Do, U.S.A was a formal part of the I.K.G.A. Today, the Goju Ryu Kai USA has very few Shibu Dojo, But at one time the association boasted 86 schools and about 50,000 students in the USA. There were 20,000 students in the New York / New Jersey area alone.

Mr. Gosei Yamaguchi is noted for his teaching of the physically and mentally handicapped. In 1972 he was chosen to the Black Belt Hall of Fame. In 1975 he became a member of Who’s Who in the Martial Arts. He is the author of two books: Fundamentals of Goju-Ryu Karate and Goju-Ryu Karate II.

Mr. Yamaguchi taught Kinesiology and self defense at San Francisco State University and headed the Goju-Kai Karate-Do, U.S.A.. After more than 75 years in the study of Goju Ryu, his current rank is 9th Dan Hanshi, Shihan. Mr. Gosei Yamaguchi still remains one of the legendary Karate-Ka in the United States today and still teaches Goju Ryu in its most classical form. He idealizes the martial arts as educational tools and approaches Karate from the points of view of psychology, physiology, physics, ethics and aesthetics, applying them to everyday life.

Teruo Chinen: An Ancient Man in a Modern World