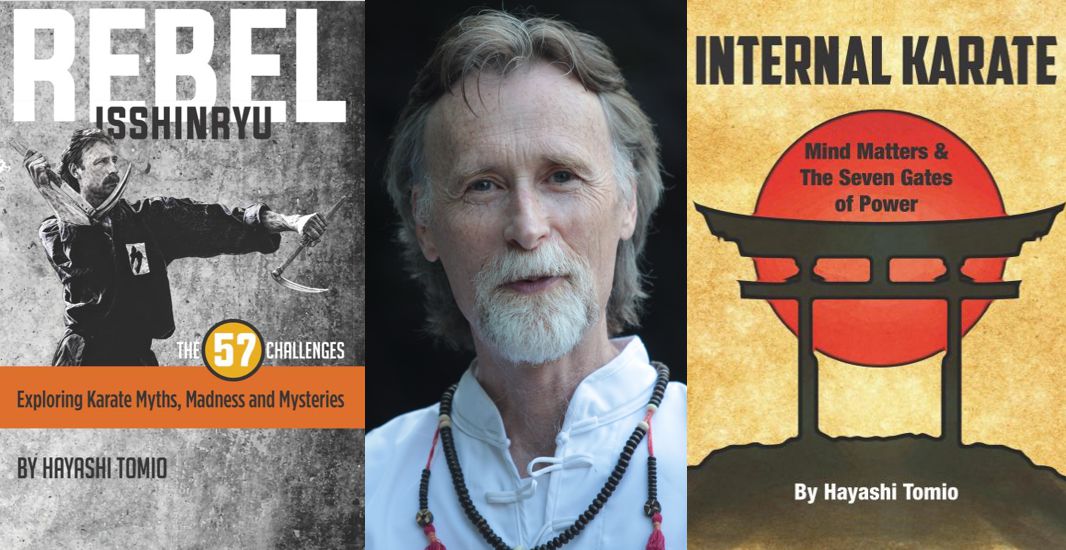 Shifu Hayashi Tomio (Chris Goedecke), Wind School headmaster, 8th dan, has been a career sensei for over forty-six years. He is the author of Internal Karate: Mind Matters and the Seven Gates of Power, The Soul Polishers Apprentice: A Martial Kumite About Personal Evolution, The Wind Warrior: Training of a Karate Champion, and Smart Moves, A Kid’s Guide To Self Defense. He founded the Martial Art Directory Association of New Jersey in 1984, which published A Guide To The Martial Arts of New Jersey (1984). He has published many articles and teaching stories in trade magazines. Hayashi was one of twenty-five professionals selected to express his training philosophy in the book, Martial Arts Teachers on Teaching (Frog Ltd.) Hayashi is the inventor of the strategy martial art card game, Grand Master. He has appeared in the third edition of Who’s Who in American Karate and Who’s Who In The East for his martial contributions and on cable television and radio demonstrating and discussing martial arts. He has studied numerous martial styles. He serves as senior counsel for the Mushindo Kempo Association in the USA and is a senior Buddhist Bodhisattva Warrior Monk in the Buddhist Chen Yen Shingon Mikkyo sect. Hayashi began his karate training in 1968 at the International School of Judo and Karate in Summit, New Jersey. After graduating Fairfield University in 1973, with a BS in Business Administration, he became a senior instructor for the Isshin Kempo Association, which grew into one of the East Coast’s largest karate organizations during the 1970s. Hayashi became the system’s successor in 2000. Hayashi serves as an Adjunct Lecturer in Physical Education at Drew University where he has taught karate since 1984. He offers an extensive knowledge of martial technique, principles, psychology, philosophy, and metaphysical insights, which he shares through his intimate, compassionate, and dynamic teaching approach. As well as being a popular New Jersey teacher, Hayashi is a proponent of the many benefits of traditional karate training.

Rebel Isshinryu: The 57 Challenges throws down a gauntlet with a bold challenge to Okinawan karate practitioners, and particularly Isshinryu karateka to wake up to the amazing wisdom of Asian Esoteric Teachings embedded in all of Okinawan karate. Learn the secrets behind Isshinryu’s unique fist formation, the Kihon, the Kiai, the Crescent Step, Sanchin kata, the reason for Isshinryu’s eight Forms, how the blocks aren’t blocks, how the Cat stance manipulates the human energy field, and more… Long held and taught only to select initiates, the Esoteric Teachings represent the source of authentic martial alchemy, Ki cultivation, and powerful, internal mind/body strength methods. Karate’s next evolutionary step is provocatively outlined through its Kiko or internal practices. Shifu Hayashi, author of The Soul Polisher’s Apprentice and Internal Karate: Mind Matter & The Seven Gates Of Power, Buddhist monk, and teacher of teachers with nearly fifty years martial experience, presents his personal rebellion in a series of 57 Challenges aimed to lift the ceiling of advanced Isshinryu and Okinawan karate training.

Internal Karate: Mind Matters And The Seven Gates Of Power

Internal karate is a mostly forgotten or, at least, little understood component of traditional karate practice. It is however, the very foundation upon which most Asian forms rest. It is also one of the best kept secrets of the Asian arts, and surprisingly, it remains a secret even to many modern instructors currently teaching them! This book reveals the mystifying powers of Qi and how everyone possess a unique ‘Energy Body’ that imbues us with amazing versatility to triumph over our opponents and bring well-being into our life. This book was written for martial artists of all styles as a primer on how every person organizes and uses subtle energy. The book is divided into five sections: Part 1 revisits why we train in martial arts and address its core nature. Part 2 looks at how the brain/mind is intimately entwined with our physical practices. Part 3 explores ‘Warrior Power’ with a seven-tiered template of the distinct ways in which we all use our personal powers. Part 4 discusses the working fundamentals of the Subtle Energy Body. Part 5 invites readers into a dialog amongst ten senior martial artists and takes a brief, practical look at some of the internal components of three common martial techniques. There is a great mystery surrounding internal martial arts study, particularly within the hard style community. This is due in part to a lack of substantive information available in the mainstream literature along with a general skepticism about the subject matter. What was most amazing to the author was how much of this information was embedded within the traditional forms coming out of Korea, China, Japan, and Okinawan. Hayashi shares his fascination with the unique technical configurations of the Okinawan empty-hand forms as they related to internal principles. He has been decoding traditional forms as conveyors of internal truths for the last 23 years. Most of the nei jia, or internal families/systems in China still convey their teachings non-verbally, that is, by means of calculated and consistent repetitions. Students just ‘did’. They did not talk about doing. Although this methodology led to many fine intuitive internal experts and masters, it left a void for those who lacked such sensitivities. Hayashi differs in his approach to the subject by offering compelling insights and his ability to clearly explain these distinctions to an interested audience.

USAdojo - August 13, 2013
We use cookies to ensure that we give you the best experience on our website. If you continue to use this site we will assume that you are happy with it.OkRead more