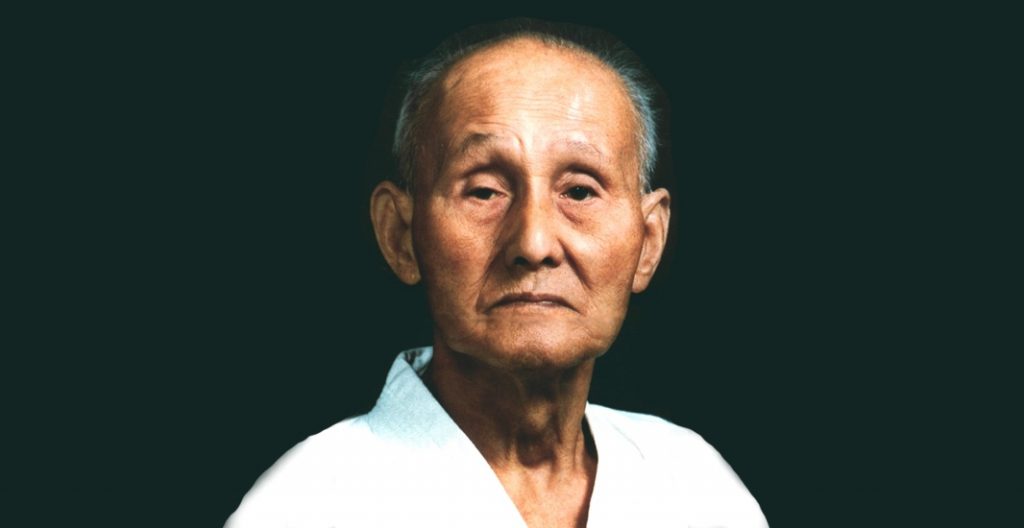 Hironori Otsuka was a Japanese master of karate who created the Wado-ryu style of karate. He was born on June 1, 1892 in Shimodate City, Ibaragi, Japan. He was the first son, and the second of four children, of Dr. Tokujuro Otsuka, a Doctor of Medicine. Otsuka Sensei was first introduced to martial arts by his great uncle, Chojiro Ebashi, a samurai warrior, who began teaching him Jujitsu. This marked the starting point of his life-long fascination with the martial arts.

On the 1st April, 1897, Otsuka Sensei started school where he studied Shindo Yoshin Ryu Jujitsu, under the supervision of his father. Later, when he was 13, he studied the style under Shinzaburo Nakayama Sensei, the third Grand Master of this style of Jujitsu. Unlike the other schools of jujitsu at the time, Yoshin Ryu specialized in kicking and punching techniques in addition to throwing, twisting and locking techniques. Otsuka Sensei continued to study the style whilst at Waseda University from 1910 to 1917. He also studied different styles of Jujitsu, concentrating on their positive aspects. In doing so, Otsuka Sensei learned a great deal about the body’s vital points for both attacking and healing purposes.

In 1922, Hironori Otsuka Sensei attended the sports festival in Tokoyo, where he encountered Karate taught by Gichin Funakoshi, a Karate instructor from Okinawa, and a man widely held as the “Father of Modern Karate”. Otsuka Sensei was so impressed with this that he visited Funakoshi Sensei on numerous occasions during his stay. Funakoshi Sensei was, in turn, impressed by Otsuka’s enthusiasm and determination to understand Karate and agreed to teach him all he knew about it. In the following years, Otsuka Sensei set up a medical practice dealing with martial arts injuries. His prowess in martial arts had led him to be the Chief Instructor of Shindo Yoshin Ryu Jujitsu at the age of just 30, and an assistant instructor at Funakoshi Sensei’s dojo.

By 1929, Hironori Otsuka Sensei was a registered member of the Japan Martial Arts Federation. At this time, Okinawan Karate only concentrated on Kata, which is a set sequence of movements against an imaginary opponent (or group of opponents). Otsuka Sensei thought that the full spirit of Budo, which concentrates on defense and attack, was missing, and that kata techniques did not work in realistic fighting situations. He experimented with other, more combatative styles such as Judo, Kendo and Aikido. He blended the practical and useful elements of Okinawan karate with traditional Japanese martial-arts techniques from jujitsu and kendo, which lead to the birth of Kumite, or fighting, in Karate. Otsuka Sensei thought that there was a need for this more dynamic and fluid type of Karate to be taught, so he decided to leave Funakoshi Sensei to concentrate on developing his own style of Karate – Wado.

1934 proved to be a pivotal year for both Hironori Otsuka Sensei and Wado Karate. On February 28th, Otsuka the Second was born. During this year, Wado-Ryu Karate was also officially recognized as an independent style of Karate. This recognition meant a departure for Otsuka Sensei from his medical practice and the fulfillment of a life’s ambition – to become a full-time martial artist.

Hironori Otsuka Sensei’s personalized style of Karate was officially registered in 1938 after he was awarded the rank of “Renshi-go”. He presented a magnificent demonstration of Wado Karate for the Japan Martial Arts Federation. They were so impressed with his style and commitment that they acknowledged him as a high-ranking instructor. The next year the Japan Martial Arts Federation asked all the different styles to register their names. Otsuka Sensei registered the name Wado-Ryu. The next few years witnessed Wado-Ryu Karate going from strength to strength. New dojos were opening and Karate was being taught at universities. Otsuka Sensei himself was becoming a recognized figure within the world of martial arts.

In 1944, Hironori Otsuka Sensei was appointed Japans Chief Karate Instructor. In 1945 Otsuka the second began to receive expert tuition from his father in Wado-Ryu Karate.

From this point until the 1960s, Wado-Ryu Karate remained on the three small islands of Japan. It was hardly recognized outside of the east. However, in 1963, a three man team left Japan to demonstrate Wado-Ryu Karate to America and Europe. The team was composed of Arakama Sensei, Takashima Sensei and Sukuzi Sensei. The impressions they left wherever they went were tremendous, and Wado-Ryu Karate soon became recognized world-wide.

During this time, Hironori Otsuka Sensei continued to train and instruct Wado-Ryu Karate in Japan. He was awarded the title “Kun Goto Suokuo Kyoku jujitsu Shuo” in 1966 by the late Emperor Horohito. It was presented by the Emperor for his dedication to the introduction and teaching of karate. This dedication led to the further, historic, award of “Meijin”, or The First Excellent Martial Artist in Karate 10th Dan, in 1972. This was the first time that this award has been given to a practitioner of karate, and was the same status as that of Kyuzo Mifune in Judo and Hakuko Nakayama in Kendo.

Hironori Otsuka Sensei continued to teach and lead the world of Wado-Ryu karate into the 1980s. Otsuka the Second became the second Grand Master of Wado-Ryu in 1982, taking his father’s name, Hironori.

Hironori Otsuka Sensei passed away peacefully on January, 19, 1982. Throughout the world where martial arts are practiced, he will continue to be remembered for his enormous contribution and individual devotion to Wado-Ryu Karate.