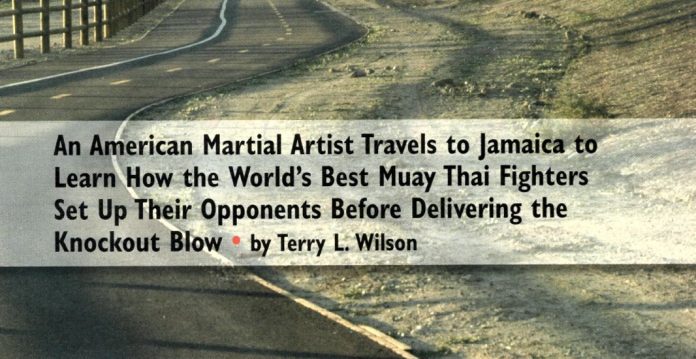 An American Martial Artist Travels to Jamaica to Learn How the World’s Best Muay Thai Fighters Set Up Their Opponents Before Delivering the Knockout Blow.

On June 20, 2008, two dozen of the world’s top Muay Thai practitioners squared off in Jamaica’s Trelawny Stadium for a record nine title fights. The unique event was produced by Dennis Warner, a veteran kickboxing promoter from the United States. Having spent more than $6 million during the buildup to the show, Warner fully expected it to raise the bar in the kickboxing world—and it did, in large part because he was able to recruit the likes of Steven McKinnon, Manson Gibson, Clifton Brown and Baxter Humby.

I flew to Jamaica to spend time with the martial artists for several days before fight night. While staying with them at the beach-front Ritz Carlton resort, I watched as they sweated under the palm trees. and whenever they took a break from their training. I pelted them with questions about their favorite strategies for the ring.

Steven McKinnon
Hailing from Australia, McKinnon likes to set up his adversaries for a combination that attacks on different levels.

“If I want to execute a left low kick to my opponent’s leg, I’ll set him up with a right jab to the head.” he said. The principle has been a staple of traditional sparring for decades: If your goal is to attack low, first aim high—or vice versa. Whenever possible, switch from one side to the other to further Confuse him.

Using his brother as a target, the likeable Aussie then ran through another plan of attack that relies on the same concept but in a spatially compressed way. “I can also step in and throw a left knee to the body to set him up for an elbow smash [to the head],” he said. That’s been very effective for me.”

Although McKinnon has KO power in all his limbs, he loves to throw a rising elbow strike to end a tight. “I use my elbow like an uppercut,” he said. ‘First, I split my opponent’s guard by throwing an elbow over the top. That draws his guard up a bit. Then I drive my other elbow between his arms, smashing him in the jaw with an uppercut elbow.” 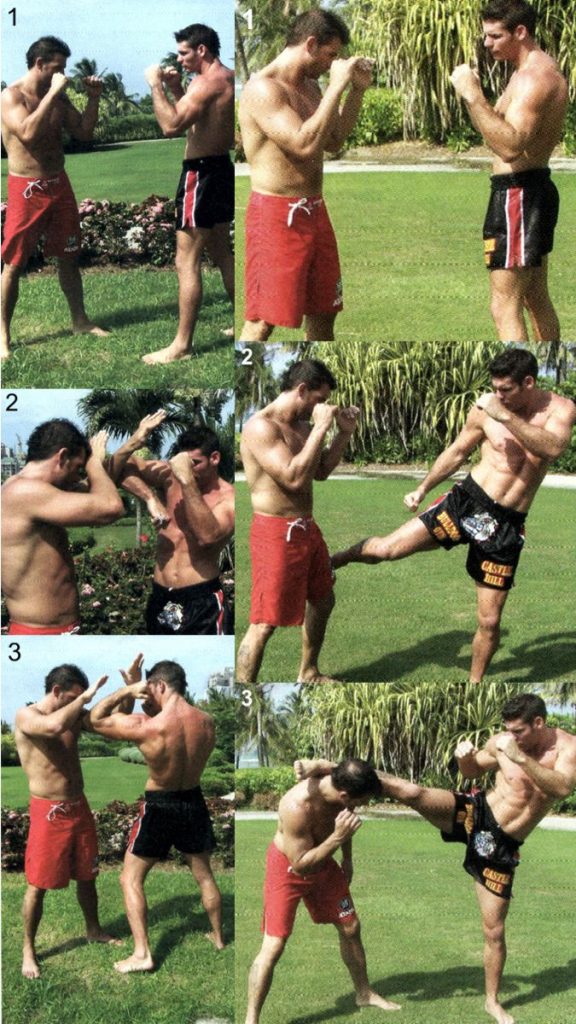 Right Photos: 1) Steven McKinnon (rt) faces his opponent.(2) He sets him up with a right elbow, making him raise his guard.(3) McKinnon exploits the opening that results with an uppercut elbow to the face, executed with his opposite arm.

Left Photos: (1-2) To set hjis adversary for the knockout, Steven McKinnon drives a roundhouse into his lead leg . (3) With the man stunned and his guard lowered, the kickboxer launches a shin into the man’s head.

Manson Gibson
Next, I found one of the senior competitors getting some last-minute tips from renowned muay Thai trainer Bob Chaney. A resident of Chicago, the 47-year-old Gibson has more than 110 professional fights on his resume and his success rate against Muay Thai stylists has earned him the nickname “Thai Killer.” He came to Jamaica seeking one last shot at glory and, hopefully, one last title.

A kung fu expert who’s used his Chinese skill base against some of the world’s best kickboxers, he’s unconventional, to say the least. “I like to set my opponent up for a spinning backfist.” Gibson said. “When I do that, the most important thing is to spot where I want the technique to land and make a mental note of that position before I begin the spin.”

He extrapolated on the philosophy of spotting: “It starts with how my opponent’s hands are positioned. If I want to land a spinning backfist. I don’t want to move off-line. So I throw a jab or two to get his hands where I want them. As soon as I see the opening. I make a mental spot and spin using my hips to pivot into position. I try not to step at all. It’s all in the hips and the rotation of the elbow and shoulders.”

“A left-handed fighter, Gibson often uses a spinning hook kick in addition to a back-fist. He sets it up by stepping to the right of his target as he throws a left jab, placing his body on line—or, as he says, on spot—to execute the turning kick.

When pitting traditional kung fu against muay Thai, success requires Gibson to have a solid stance and a tot of speed. “Plus, I’ve got to have a good defense because while I can quickly win with a spinning technique, I can lose just as fast. If I miss or don’t spot my target properly, I’ll be spinning into my opponent’s counter-punch, and that’s not a good thing.”

Another way Gibson likes to set up his opponent is by baiting him into closing the gap. For instance, he might leave his torso open to encourage his foe to target it with a front kick. As soon as he does, Gibson traps the leg, darts in, positions his lead leg for a trip and drives the man backward to break his balance. 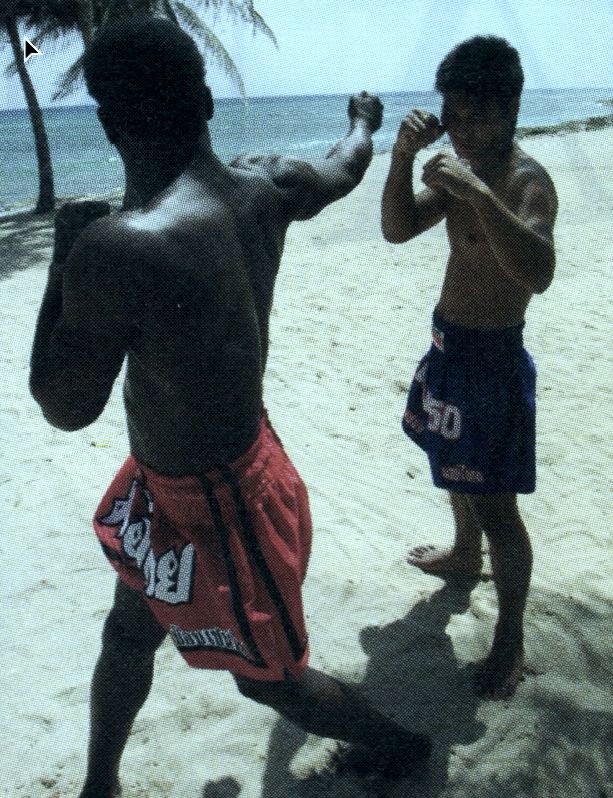 The key to Manson Gibson’s (left) spinning backfist is the way he spots where the technique is supposed to land. He then distracts his opponent with a jab and rotates his body without stepping, after which he slams his knuckles into the target.

Clifton Brown
The day before the big night, I found Brown fine-tuning his techniques on the beach. “My strength is in my knees,” the Canadian champion said between drills. “I love to fight in close, where my knees can set up my elbows and my elbows can set up my knees.”

To illustrate his strategy, he faced his foe while staying relaxed. “The trick in set-ting him up is to maybe give him a little target, making him commit to a right punch.” he said. “Maybe I do that by throwing a right of my own or a low kick, expecting him to counter on the opposite side. [When he does,] I sidestep his punch or brush it away using a blocking motion with my left hand, then deliver an elbow over the top.”

Our chat was cut short when his trainer, Who didn’t want to risk having Brown’s opponent catch a glimpse of how he was planning to win, intervened.

(1) Clifton Brown (left) and his opponent face off. (2) Brown offers him a target, and when he takes advantage of the opening with a right punch, Brown circles to the outside as he parries the blow and sets him iup with a punch to the head. (3) The knockout shot is a left elbow to the jaw.

Baxter Humby
My final meeting was with Humby, the martial artist who is known as “the One Armed Bandit,” because he has no right hand—it was amputated just below the elbow shortly after he was born. For years, Humby has impressed tight fans around the world by winning title after title despite his handicap. His conduct in and out of the ring has taught thousands of spectators the true spirit of the martial arts.

“I can’t wait to get into the ring and hurt somebody,” he said with a good-natured smile. “I’ll [probably) set my opponent up with my jab. I’ll intentionally miss by two or three inches—that will usually get him to move back and upset his timing. Then I’ll quickly switch my stance and throw a kick with my lett leg as he backs away.” In the past. Humby has worn a glove on his right elbow, but for this bout, he said he wasn’t planning to because elbow strikes are legal in muay Thai. He added that the rule structure would permit him to use his elbow after setting up his opponent with his left hand.

The first time I fought [under) full muay Thai rules in Las Vegas. I was told that there was no rule saying that you don’t have to wear a glove if you don’t have a hand because in muay Thai, elbows are legal. For once, that gave me an advantage,” he said. “A lot of fighters have underestimated the power of my elbow and paid the price for that mistake.”

Humby said he’s been a martial artist since he was 4, the age at which his father began teaching him boxing. Now 35, he’s approaching the age at which fighters typically start thinking about retiring.

Not Humby. He’s tackling yet another challenge: the mixcd martial arts. “I had my first MMA fight last September in the California Combat Championships and won the decision.” he said. As he sets about conquering the competition in MMA. I have no doubt that Humby will devise an arsenal of setups that will serve him as well as his stand-up strategies have in kickboxing.

The key to Manson Gibson’s spinning backfist is the way he spots where the technique is supposed to land. He then distracts him with a jab and rotates his body without stepping, atter which he slams his knuckles into the target.

A Karate Chop Offers Proof of the Power of Physics

A Scientific Break Down of the Strike