If Chuck Norris could answer the call in his late 60’s, could travel through Iraq under these circumstances, who was I to allow myself to become weak.

In 2007, Chuck Norris and a camera crew visited the troops in Iraq to personally thank and meet as many service men and women as possible. Mr. Norris wanted to visit isolated areas that were not regularly visited.

I slipped into a seat to watch the documentary, more exhausted than I’d ever been. I was too tired even to cry. I stared at the movie screen trying to reorient myself. Slowly I slipped into war torn Iraq, traveling from base to base with Mr. Norris as he met with and encouraged the soldiers. He traveled from camp to camp in unbelievable heat, often eating rations, flying in helicopters, driving in tanks and trucks, always in the heat, always with a smile, mile after mile, base after base, camp after camp. The small children around me in the audience were squirming. There were so many troops, and each individual was important. There were tent hospitals and lines and lines of soldiers who wanted photos and a hand shake from Chuck Norris. The more I watched the more enthralled I became. You could see that Mr. Norris was losing weight and that he was often running on sheer will power. He smiled and talked with each and every soldier, giving all of himself in the process. 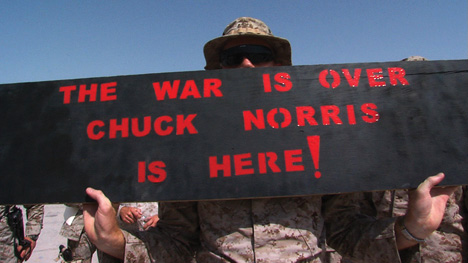 My soul became quiet and I was deeply convicted. If Chuck Norris could answer the call in his late 60’s, could travel through Iraq under these circumstances, who was I to allow myself to become weak. He shared his faith and encouraged each individual, drawing on God and that “inner strength” he has. This documentary was not fiction, and the task was overwhelming, but he did it, followed by a camera crew, so we could share in the experience. 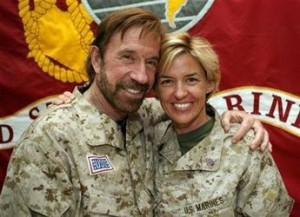 The conviction became deeper. How could I allow myself to find my circumstances to be “difficult”. Our men and women in the armed services were giving everything, including their lives for us, and seeing the individuals close up this way changed my attitude and I was not going to let myself be beat. I am a martial artist with the Norris’ in my linage and I was going to behave with that in mind!

I left the theater with a few old timers, truly great martial artists and friends of the Norris’ and friends of mine. We talked about the documentary, the war, and it’s role in our lives and how we appreciated what Mr. Norris had done to honor the soldiers and to share with us back in the States.