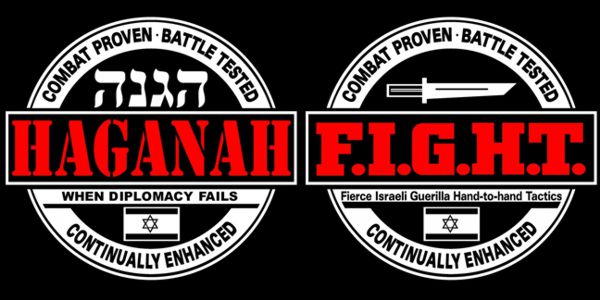 Israel, a country that has had to deal with urban warfare and close quarters combat since its formation nearly 55 years ago, Haganah is a word that evokes powerful remembrances. These are memories of a group of freedom fighters vastly outnumbered and ill equipped, the ‘Haganah’ successfully defeated better-equipped adversaries to establish the State of Israel. The Haganah ultimately became the IDF, Israel’s current military force.

Today, Haganah is a unique self-defense system that integrates both unarmed and armed combat tactics and applies them to the needs of civilian and professional operators.

It simply and powerfully combines the self-defense and fighting styles of Israel with tactics called LOTAR, currently being taught in IDF Special Forces Units. Other systems may focus on stand-up fighting, ground fighting, or armed combat. Haganah-true to its military heritage-gets its power by teaching how to fight and win in every scenario.

Haganah teaches in the classroom, on DVD/VHS video series and in its book, FIGHT TO SURVIVE, how to “contain,control and demolish” the opponent. The aggressiveness and confidence experienced students possess is obvious to people considering enrolling in the program.

Continual enhancement is the one factor that makes the Haganah system so effective, it constantly evolves to meet the requirements of the always changing elements of real combat. Haganah instructors remain up to date with the training of Mike Kanarek, and Mitkan Adam, the IDF’s counter-terrorism school,and are constantly putting what they learn to use. They then bring their combat experience into the system. This occurs regularly. There is no ego in the system. It uses what works. Period.

Haganah and F.I.G.H.T. basic training principles are simple. Avoid,escape,demolish. If you can, escape an escalating situation. If you are attacked and cannot immediately escape, do not assume you can judge your attacker’s ultimate intent. Therefore, demolish the attacker. Be measured in your response only when choosing how the fight will finally end. Bring the opponent in, jam his attack,contain control,demolish. Students are drilled to create a mindset that reacts to a violent assault by immediately switching from a victim to a predatory aggressor.

Every touch is designed to create damage. Every tactic has both a defensive and offensive element. Techniques are overlapped to “short-circuit” and overwhelm the attacker. There are no rules of engagement. Every technique builds on instinctive responses. Strength doesn’t matter.

Understand other systems and recognize their application in an engagement. Exploit their weaknesses. Stay up to date and keep enhancing what you do based upon real life experience. This system is designed to enable all of these things to occur.

The teaching approach is designed to mirror militay style teaching while recognizing the time demands and typical fitness levels of the working adult. It presents virtually the entire content of the system-hand-to-hand, knife defenses, gun disarms, ground fighting- in a few hours per week over a four month cycle, called a “rotation.” The rotation repeats itself three times a year. Four months is quick, but the hand-to-hand combat component of military boot camp doesn’t last more than a couple of weeks worth of hours and you are ready for the fight of your life at the programs end. Depending on a students background, within 2 or 3 rotations they can become quite proficient.

This rapid comprehensive training is possibe because the hand-to-hand, empty hand against the knife components use limited core techinques and a process known as technique funneling. No fight is a blueprint, so different initial attacks require different initial responses. But the system has identified four common positions that can be achieved for nearly all attacks within one to three moves, regardless of the initial attack.

Haganah calls these carefully tested positions of control and dominance”points of reference.” The funneling effect of the system is designed to bring the opponent to the points of reference. From each of the four points of reference,students are taught virtually identical sequences of strikes (called “objective” options) to be used to restrain, incapacitate or terminate the attacker. This vastly reduces the number of techniques a student must become capable of,making learning and muscle memory programming (reactive programming) very fast.

Within a few weeks students become very proficient at executing each of the three objective options and they are programmed into muscle memory. That frees students from the “what do I do next?” anxiety that can take years to overcome when learning a new system. This enables students to quickly focus on and devote maximum time to programming their bodies to react automatically with proper entry techniques when attacked and to gain dominance by reaching the point of reference. This process occurs through application of 18 core hand-to-hand and 10 core knife defenses and 10 core gun disarm scenarios. Students defend against these scenarios repeatedly, indoors and outdoors, in light and darkness and with different size and experience level opponents. In a four month rotation, attending twice a week, a student has practiced the fight ending sequences from the point of reference forward about 1,0000 times; each core hand to hand, gun disarm and knife defense scenario a couple dozen times. If the student attends on Saturday for 2 hours, they can cover the entire ground survival program, tactical knife program and begin the combat shooting program during the same four month rotation. More rotations translate into reduced reaction time and quicker, more correct entry trechniques.

As we all know in combat things don’t always go as planned. That’s where the Haganah funnel techniques excels. By designing its techniques around the points of reference, Haganah accommodates many situations and practitioneer skill levels. The point of reference becomes a familiar and comfortable place. Regardless of how the fight started or whether the initial self-defense reaction was even correct, all Haganah practitioners battle to get quickly to one of those landmark positions. They seek that familiar place in an unfamiliar landscape where they can be completely confident they can find their way home, no matter how long or little they have trained. Once they reach that position the adversary is theirs.

Part of Haganah’s philosophy of continual enhancement is to use modern tools to support effective learning. All of the sessions taught during the four month period in each of the components of the system exist in manuals,on VHS and DVD. Students reinforce their knowledge and accelerate programming time by previewing the material before class and by reviewing and practicing the material between classes. The video component is identical to the material presented in class, so there is nothing lost in the translation from classroom practice to at home (or on the job) practice. It’s time for martial arts and self-defense training to use the same tools that other formal education systems have found so effective; structured video presentations among them. In order to learn throughly and quickly, adults need to review material repeatedly, especially if they have no other martial arts background. Video supported training helps them reduce their anxiety level, learn faster and stick with the program.

In some self-defense systems, empty-hand defenses against weapons are taught without regard for the student’s familiarity with weapons. Not in Haganah, while Haganah teaches gun disarms as taught in LOTAR, Israel’s military counterterrorist training, it doesn’t typically teach a student gun disarms without having them hold a real gun, rack the slide, and understand various safety mechanisims. We want them to be aware of the extent of their knowledge or lack of it. We want them to be confident in their techniques, but we also want them to understand what the tactical situation will be after they get the gun. Haganah students can elect to take the Combat Shooting component of the system or not, but at least they’ll know the basics.

Likewise, with knives the system teaches empty-hand defenses against the knifeattacks, but many students also take Tactical Knife Fighting. They learn what a skilled knife fighter might do in an attack and understand thoroughly the complexity of defending against the knife. For that reason, many students choose to carry tactical folders where legally permitted to do so, and the students that don’t at least feel more prepared by simply acquiring the knowledge of what an encounter with a skilled knife fighter might involve.

At some level, it’s about intelligence gathering. In the military, the key to surviving an engagement is often good intelligence. It’s the same in the street. We focus on integrating training that brings our students a clear understanding of the adversary. Whether it is teaching them the knife or teaching them likely tactics used by practitioners of other popular fighting styles, it all serves to make them more capable of defending themselves. From all perspectives, Haganah is a complete hardcore fighting system of combat proven tactics from a place that has always had the need—Israel.

USAdojo - August 22, 2005
We use cookies to ensure that we give you the best experience on our website. If you continue to use this site we will assume that you are happy with it.OkRead more