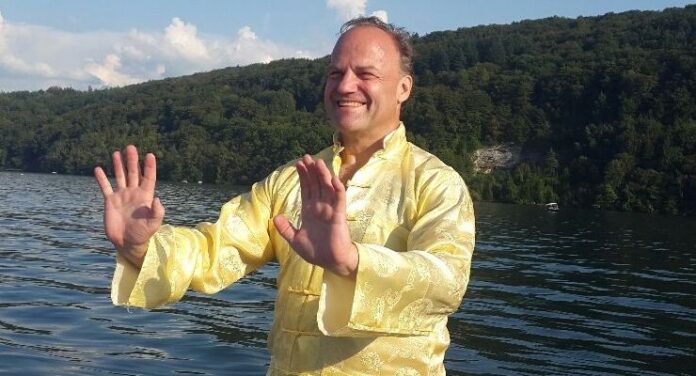 Grandmaster Jürg Ziegler (10th Dan) lived in Wil, St. Gallen, Switzerland and was world-famous under the name “Sun Tje Chiang” (the “lightning fist”) and was the chairperson and chief instructor of the “World Community Sin Moo Hapkido”, the “World Kombatan Community” and Pioneer worldwide for the dissemination, training and development of Sin Moo Hapkido, South Shaolin Lohan Kung Fu, Kombatan and Modern Arnis, Guo Lo Wing Chun Kung Fu, Qi Gong and above all as the founder of “Shaolin Energy Healing”.

Since 1986 he headed the “Jürg Ziegler Martial Arts Center” (JZMAC) – martial arts schools – and since 1992 he had also taught personally in Wil, St. Gallen. He had practiced Asian martial arts since 1973. Among other things, he was the founder of the “World Community Sin Moo Hapkido” ( www.sinmoohapkido.eu ) and “World Kombatan Community” ( www.kombatan.eu ) as well as Vice President and founding member of the “World Hapkido Association”. He started teaching in 1982. He had trained over 150,000 students in 54 countries worldwide.

He was significantly involved in the spread and development of numerous martial arts in Europe and Asia. It is thanks to his almost 40 years of commitment and that Guo Lo Wing Chun Kung Fu, South Shaolin Lohan Kung Fu, Sin Moo Hapkido and Kombatan / Modern Arnis and Qi Gong are uniformly organized worldwide and have a very high priority. Numerous publications, books, videos, DVDs and seminars held worldwide have been rewarded with countless international awards.

At the age of 10 Jürg Ziegler began studying Asian martial arts – and continued to educate himself until his death. Since 1982 he had been teaching Asian martial arts. In the meantime he was a pioneer of South Shaolin Lohan Kung Fu, Sin Moo Hapkido, Flying Eagle Hapkido, Guo Lo Wing Chun Kung Fu, Chi Kung, Tui Na, Kombatan / Modern Arnis, Abanico Tres Puntas, Senkotiros, etc all over Europe, Eurasia and Middle East and has trained students in over 60 countries worldwide, including various special units of the military and police.

4-6 times a year he traveled to Asia for martial arts, healing arts and diving. He headed the JZMAC (Jürg Ziegler Martial Arts Center) with training centers in Wil, St. Gallen, Switzerland, Winterthur and Zurich, which he founded in 1986 ( www.kungfu.ch ).

In 2015, Grandmaster Jürg Ziegler co-produced the film “The Spirit of Shaolin” with Director Leo Fong in Los Angeles, USA, as co-producer.

In 2016 he was awarded a “Martial Arts Oscar” by the “Action Martial Arts Magazine Hall of Honor” as “Grandmaster of the Year in Healing Arts”.

For many years, Jürg Ziegler had been learning Chinese medicine as part of his martial arts training. In 2006 he successfully completed his “Professional Master TCM Herbalism” degree in Malacca / Malaysia.

In June 2011 Grand Master Jürg Ziegler was appointed “Commander of Archbishopric” by the Archbishop in Prague / Czech Republic.

In October 2011 he received the “Golden Order of Merit” from the Archbishop of Prague and later even the Papal Order of Merit : “Jerusalem Pilgrim Cross Order in Gold”.

Jürg Ziegler had been active in diving since 1998 and had been an enthusiastic diver since the beginning. In the meantime he successfully completed his training to become a PADI IDC Staff Instructor and EFR Instructor Trainer and is a specialty instructor for PADI in over 20 areas.

Since 2005 Jürg Ziegler had been running his own Jürg Ziegler “Kung Fu Divers” exchange school with training centers in Wil, St. Gallen, Switzerland, Winterthur and Zurich. He was also an instructor trainer for “Emergency First Response” and in this role he regularly offered courses in life-saving immediate measures, CPR (cardiopulmonary resuscitation), AED and emergency oxygen use as well as further first aid.

Sadly for all, Grandmaster Jürg Ziegler passed away on October 3, 2020.