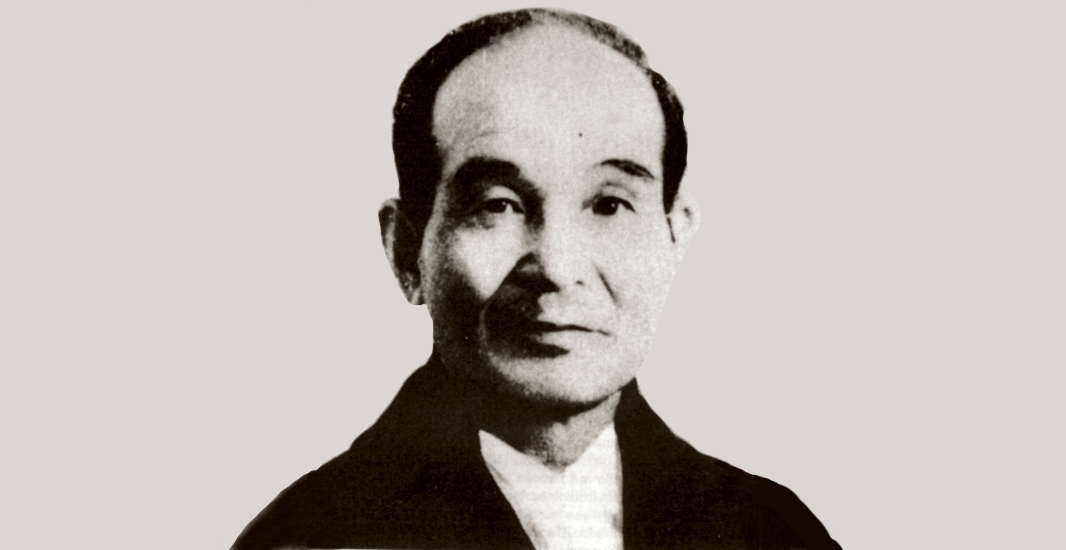 The late great martial arts grandmaster, Kanken Toyama, was born in Shuri, Okinawa on the 21st year of Meiji, September 24, 1888. His given name was Kanken Oyadamari and he born into to a noble family.

In 1897 Kanken Toyama began his formal training in karate-do under Master Itarashiki. Later, he apprenticed himself to Anko Itosu, who then became his primary teacher and was his inspirational guide. He continued studying under Itosu until Itosu’s death in 1915.

Kanken Toyama was a school teacher by profession, and his chosen field of instruction was karate-do. In 1907 Toyama was named Shihandai (assistant) to Itosu at the Okinawa Teacher’s College in Shuri City, and in 1914 he held a high office at the Shuri First Elementary School. Toyama was one of only two students to be granted the title of Shihanshi (protege); Gichin Funakoshi was the other to receive this title from Itosu.

In 1924 Kanken Toyama moved his family to Taiwan where he taught elementary school and studied related systems of Chinese Ch’uan Fa ( kempo/kwan-bop ). This included Taku (Hakuda in Japanese language ), Makaitan, Rutaobai, and Ubo. Taku is one of central China’s Hotsupu (northern school) Ch’uan Fa and is further classified as Neikung Ch’uan Fa (Shorei Kempo), that is, an internal method. Makaitan and Rutaobai, which the techniques of nukite (spear hand) came, and Ubo, all belong to the Nampa (southern school) Ch’uan Fa and are external methods or Waikung Ch’uan Fa (Shorei Kempo). These later three styles hail primarily from Taiwan and Fukuden, China. Toyama sensei was also known to have studied and taught Tai Chi Ch’uan Fa. Koyasu sensei studied t’ai chi from Toyama.

Early in 1930 Kanken Toyama moved again from Taiwan to mainland Japan and on 20 March 1930 he opened his first dojo in Tokyo. He called his dojo Shu Do Kan meaning “The Hall for the Study of the Way” (in this case the karate-way). Toyama sensei did not claim to originate a new style, system or school of thought, nor did he combine the different styles he had learned. Those who studied under him basically learned Itosu’s Shorin Ryu and the related ch’uan fa.

In 1946, Kanken Toyama, now a Dai Shihan, founded the All Japan Karate-Do Federation (AJKF). There is some evidence that the AJKF actually got its start in 1930’s, however the federation evolved into a full fledged organization when it was officially documented and sanctioned in 1946. Toyama’s intention when establishing the AJKF organization was to unify the karates of Japan and Okinawa into one governing organization, providing a forum for the exchange of ideas and technique. The federation became an authority for rank approval and advancement issuing rank certification, and also created a forum for competition. This competition group later pioneered full contact sparring which used modified ken-do protective equipment or bogu. The AJKF was successful in attracting important notable people from outside the organization such as Dr. Tsuyoshi Chitose, the founder of Chito Ryu Karate-Do. Dr. Chitose served in several senior positions in the federation including president and vice-president.

Kanken Toyama’s specialties in karate-do were strong gripping methods (Useishi No Kata and the Aku Ryoku Ho) of Itosu and Itarashiki and similar Chinese methods of finger and hand strengthening. He was the author of books Karate-do Taihokan and Karate-do. In 1949 Toyama was awarded a special title of honor by the Governor of Okinawa, Mr. Shikioku Koshin. Aside from learning Shorin-Ryu from Itosu, Toyama studied and mastered other styles of karate from other notable masters of Naha-te and Tomari-te which also included Okinawan Kobu-do. A few of his other teachers were Aragaki, Azato, Chibana, Oshiro, Tana, and Yabu.

It is also thought that when the Korean (Ch’uan fa) master, Yoon Byung-In came to train at his gymnasium, he also studied Northern Manchurian Kwan-bop with him. It is alleged that Kanken Toyama said that he and Yoon Byung-In should share techniques. Later Yoon Byung-In returned to Korea as a shihan of the Shudokan and taught that style there.

Although Kanken Toyama produced many capable instructors trained in his Shudokan style, he really did not view the Shu Do Kan as a style of karate-do, merely a place for training. Consequently, he did appoint a successor or Shudokan style head to succeed him and as a result the Toyama system fragmented after his death in 1966.

In 1952, Master Onishi, a senior student, founded Koei Kan Ryu. Political differences in the national Japanese politics caused Kanken Toyama to give him permission and full blessing to proceed on his own. It is not clear why he did this as he departed long before his teacher died and was apparently deprived of a very close relationship with Kanken Toyama.

After Kanken Toyama sensei’s death other senior students established their own styles. Toshi Hanaue maintained the original Shu Do Kan. Ichikawa Iso founded Do Shin Kan Ryu (The Heart of the Way Style) in 1969. Michio Koyasu founded Soryu (The All or Complete Style) in 1967. Another notable student was Byong In Yoon- the only Korean listed in Toyama’s book, the 1959 “AJKF/ Shu Do Kan register” as a 5th Dan Shihan. Byong In Yoon disappeared during the Korean war in the 1950’s only to resurface in North Korea in 1995’s. Two of his students went on to found two of Korea’s most important Kwans. Lee Nam-suk founded the Changmookwan meaning Hall for the Propagation of Military Training and Park Chull-hee founded the Kang Duk Won , meaning Training Hall for the Teaching of Virtue.