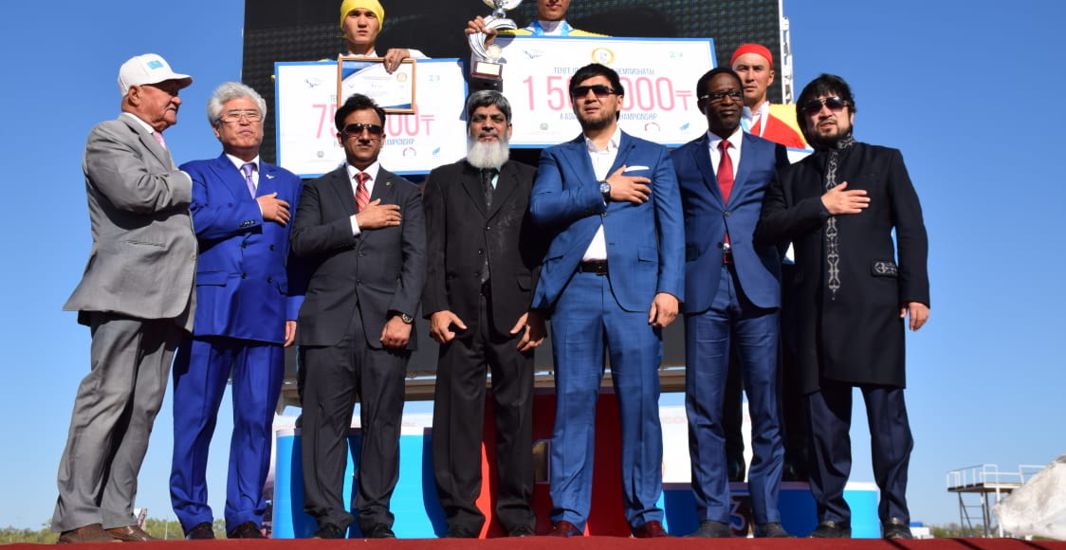 Representatives of UNESCO, including the Chairman of the Committee on Traditional Sports and Games, Khalil Ahmed Khan, Mr. Marcellin Dally, Programme Specialist – Secretary, International Anti-Doping Convention Sector for Social and Human Sciences, UNESCO and Shammi K Rana, Rapporteur Traditional Sports and Games, UNESCO, made a special visit to Kazakhstan between May 31 and July 5, 2017. The primary purpose of the visitation was to get acquainted with the level of organization, propaganda, and the interest of fans of national sports in Kazakhstan.

Chairman of the UNESCO Committee on Traditional Sports and Games Khalil Ahmed Khan thanked Kazakhstani colleagues for hospitality and wished success in the development of national sports, saying that Kazakhstan has all chances to host the Traditional Games in 2021.

“You know that traditional sports are an integral part of the historical heritage. Kazakhstan pays great attention to national sports. And we observe a tremulous attitude towards the traditions of the people and the great desire of the Kazakh side to host the first Worldwide Traditional Games under the auspices of UNESCO. In my point of view, the Kazakhstani bid has good chances. Once Greece became the birthplace of the first Olympics, taking a special place in history. Kazakhstan can also become the country that hosted the first ever UNESCO Games. It seems to me that this will help fulfill the key goal of the organization – the preservation and development of the culture of states, “Khalil Ahmed Khan stated.

In his turn, Minister of Culture and Sports of the Republic of Kazakhstan Arystanbek Mukhamediuly expressed his gratitude to UNESCO for the particular attention to the development of national sports in our country.

“I’d like to note that in 2017, 343,000 people were engaged in national sports, seven specialized sports clubs and ten specialized sports schools operate in the country. In 2016-2017 years, the list of the intangible cultural heritage of UNESCO included such sports as “Kazakh wrestling”, “Hunting with hunting birds” and “Asyk atu”, – said Arystanbek Muhamediuly.

During the visit, the UNESCO delegation sighted to the II Asian Tenge Ilu Championship and the III Asian Audaryspak Championship which had been holding in Astana with participants from 9 Asian countries. For note, Tenge Ilu is a national Kazakh sports game which requires athletes to pick up coins put on the ground from a galloping horse with full speed, and Audaryspak is identified as horseback wrestling.

The high–ranked guests from UNESCO evaluated the beauty and spectacularity of Kazakh national sports and the organization of the championships they witnessed. The delegation highly appreciated the hospitality of Kazakh people as well as the rich experience of Kazakhstan to welcome a large number of tourists for significant sports events.