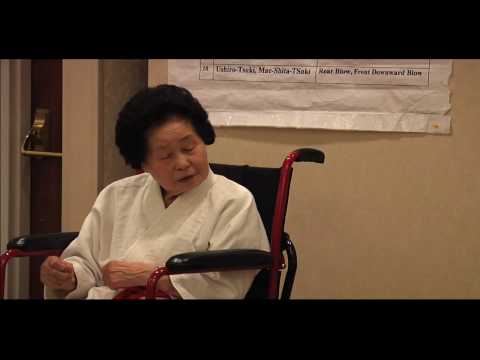 Judo’s highest-ranked woman, Keiko Fukuda, traveled from San Francisco to Tokyo during the last week of October to be honored at the Kodokan Judo Institute’s annual judo kata competition.

The 96-year-Keiko FukudaKeiko Fukudaold judoka, Keiko Fukuda, was also honored at a reception and press event that was held two days after the competition, said filmmaker Yuriko Gamo Romer, who accompanied Fukuda to Tokyo to document the event.

During the opening ceremonies, Fukuda was introduced and praised for her accomplishments in judo during the past 43 years in the United States.

The Tokyo-born Fukuda has dedicated her entire life to the martial art. Her grandfather was a friend of Jigoro Kano, the founder of judo. Fukuda is his only living student.

Keiko Fukuda is known for her expertise in kata, or form, which is practiced by following a formal system of prearranged exercises. Her legacy is far-reaching, as she has taught students from across the world, and led the way for multiple Olympians.

Keiko Fukuda has long inspired Romer, a documentary filmmaker who hopes to complete her film, “Be Strong, Be Gentle, Be Beautiful,” next year.

Both Romer and Keiko Fukuda attended a fundraising event for the film, held Nov. 8 at Mills College in Oakland.

Romer first visited Keiko Fukuda’s dojo in Noe Valley in San Francisco in 2006 after reading an article in O, The Oprah Magazine. “I really felt I would like to film her documentary right at the moment I met her,” Romer said.

Romer said the judoka exuded warmth and energy. The filmmaker returned to the sensei’s Soko Joshi Judo Club (The San Francisco Women’s Judo Club) often and even visited Keiko Fukuda at her home.

In 1953 Keiko Fukuda traveled from Japan to Oakland to visit a judo dojo. She later began giving seminars across the world in Canada, France, Norway, Austria, New Zealand, the Philippines and Mexico.

Keiko Fukuda began teaching at Mills College in Oakland in 1966. During that time, one of her students, Shelly Fernandez, invited Fukuda to live with her in her San Francisco home, where they still live together. Fukuda opened her San Francisco dojo in 1973.

It is clear that she loves judo, said the fifth-degree judoka.

During Romer’s trip to Japan, several notable judoka expressed their appreciation and respect for Fukuda’s contribution to the martial art. Yamaguchi was among them. Romer said that Yamaguchi praised Fukuda for her decision to pursue a lifelong commitment to judo, thereby enabling women to follow suit.

Toshihiko Koga, a gold-medalist in men’s judo in the 1992 Barcelona Olympics, has a dojo in Kawasaki in Kanagawa Prefecture, where he teaches children.

Keiko Fukuda’s achievements did not come without sacrifice, however. She tears up in the movie trailer posted on Flying Carp Production’s Website, www.flyingcarp.net  when she explains her decision to give up marriage, family and her Japanese citizenship to concentrate on judo.

More than four decades ago, social restrictions prohibited Keiko Fukuda from choosing to have a family and simultaneously practice judo.

The film is reflective of Keiko Fukuda’s resolute motto as a judo teacher. “Be strong” refers to both the physical and mental strength, which people need to fulfill their lives, she has said. To “be gentle,” Keiko Fukuda explained, is to resemble a “flexible willow, always coming back to the position despite the harsh weather.” And “be beautiful,” she said, represents inner beauty rather than artificial beauty. “I like thoughtful people. People can be thoughtful through the training physically and mentally.”

Keiko Fukuda’s influence continues even today. Romer has likened the production of her film, to being “on a journey with Fukuda-sensei.” The visit to Japan changed some aspects of the film; it became “more substantial,” she said.

Fukuda is the author of two books: “Born for the Mat: A Kodokan Kata Textbook for Women” (1973) and “Ju No Kata: A Kodokan Textbook” (2003). Patricia Harrington, a former Mills College judo student and longtime friend of Fukuda’s, expects to release her biography, “Bow from the Heart: The Life of Judo Master Keiko Fukuda 9th Dan,”.