In the world of police work there are many tools used to increase the officer’s effectiveness and to allow him to operate in environments that are hazardous with a minimized or at least somewhat controlled risk. Some of these items are: body armor with varying levels of ballistic coverage and protection dependent on the duty performed; Protective (gas) mask so that chemical agents or OC spray deployment doesn’t inhibit the performance of duties; wet weather gear so that our uniforms and equipment don’t get saturated and/or ruined by rain; SCUBA gear for those of us who have to do underwater search and recovery work.

Depending on the quality and characteristics of the above equipment an officer or agency can expect to spend several hundred dollars per item. Ballistic vests start at about two hundred dollars and go up from there. A ballistic helmet is going to run the same or more. A protective mask is another costly item and insulated gortex “waterproof” rain gear is about three to four hundred dollars per set. Dive gear isn’t cheap and even a basic set is going to cost upwards of a thousand dollars or more. Accepting these expenses as necessary to perform assigned duties, why then do we habitually spend as little as possible to protect ourselves in the most encountered high risk environment: low light situations?

The average patrol officer works half to two-thirds of his patrol time during the hours of darkness. Even officers who are assigned to regular day shifts still find themselves in situations where they are working inside of buildings or in heavily wooded areas that are lacking in light levels. Given that seventy percent (70%) of all officer-involved shootings occur in low-light environments, wouldn’t it be prudent to protect ourselves as much as possible from the related risk? It’s as simple as purchasing and learning how to properly use a high quality decent power flashlight. Yet most officers I know will buy a seven hundred dollar vest and then put a twenty-dollar flashlight onto their gunbelt. After all, the flashlight is going to be abused and broken so why buy a good one? When asked this question I respond with a counter-question: Then why spend four hundred dollars on a good helmet? It’s only going to get broken. Why not just buy a cheap one? The answer is because when it’s properly functioning the high-dollar helmet protects your head better. Is your head worth the extra money? How about your life? 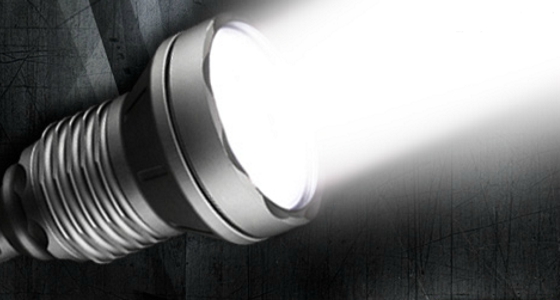 Let’s look at this a different way. As human beings we are heavily dependent upon our vision to provide us with data about everything around us. Vision is used for identification.

Identifying that which makes up our surroundings is a learned skill. We learn to detect and recognize repeating patterns that hold value for us such as body shapes, facial contours and letters that make words which make sentences, etc.

Vision is used for navigation. We take for granted that we can see where we’re going and often we navigate our way through cluttered rooms or busy hallways while we are thinking about other things because our vision-based navigation is subconscious.

Vision is used for balance. Remember when we had suspected drunk drivers stand with their feet together, eyes closed and head tipped back? Losing sight of the horizon removed a mechanism by which we humans orient ourselves to our surroundings. People who have lost their sight are frequently less stable on their feet due to their loss of visual anchoring in the environment.

Vision is used for a level of security. As small children we feared what we couldn’t see under the bed or in the closet. Many children are afraid of the dark because they can imagine what might be there that they can’t see. Therefore, what they can see provides a level of comfort and security. Nothing bad is seen so they’re okay. As adults we may not be afraid of the dark but what we can’t see often causes us an increased level of discomfort.

Vision is used for communication. Since communication involves both delivering and receiving a message, recognize that you use your vision to receive a great deal of what you are told. That’s because some of the message you receive is provided through facial expressions and body language. Emotion filled phone calls can be frustrating because you can’t see the person’s facial expressions and therefore have a harder time interpreting their intended meaning.

Vision is used for verification. What our other four senses take in we often use our vision to verify. If something feels a certain way we can look at it to confirm what we felt. If we hear a sound we can look in that direction to confirm the source and distance. Vision is also our primary distance-sensing tool and our hearing plays a poor second.

Bearing in mind all of the above and the high value of our vision in every day life much less during hazardous duty hours, recognize that we are only capable of seeing anything at all thanks to reflected light. We see light that is reflected off of objects and enters our eyes. No reflected light results in a situation we’re all familiar with: darkness. The opposite situation is what we call being “blinded by the light”. As cliche as that phrase is, it’s true. If a bright white light is shown directly into your eyes then all we can see is the white light. There is no other visual input and therefore no data received by your brain for use in decision-making. Since eighty-percent of the data we use for decision making is taken in through our eyes and since seventy-percent of all officer involved shootings occur in low-light situations, is it reasonable to make a correlation between a lack of light and reduced decision making capability?

The obvious answer is a resounding YES. So, we can plainly see (no pun intended) the high value of light in all aspects of our lives, but particularly as it relates to reducing risk to ourselves in the performance of our duties. Rather than entering a situation with lower levels of light we can use technology to take light with us. Remember that twenty-dollar flashlight? In a low light situation, if that’s what you have on your belt, then that’s what you’re staking your safety on. Maybe it would be prudent to invest a few more dollars and some training time and learn how to better survive and prevail in the high-risk situation we are most likely to encounter?

The good news is that if we control the light we are at a distinct advantage in any low-light environment conflict. The almost perfect tactical situation is to be operating in near total darkness, with absolutely no backlighting and in one hundred percent control of the only available light: our own that which we hold and control. For SWAT teams, white light might not even be necessary. Through the use of Night Vision Devices and infrared lighting equipment, such as that manufactured by SureFire, the suspect would be left in total darkness while the team operators would be able to see without giving away their positions. The downside of this second scenario is that when the suspect is confronted, if white light is used to freeze him in the decision making loop, then most night vision devices will bloom out giving the good guys nothing but brightness to deal with as well. The bad guy is as dependent on light as we are for data input and decision making so if we deny him light, or overload him with light, then we inhibit his ability to gather information and make decisions. If he can’t decide he can’t act and we’ve effectively neutralized him with light. Does that sound like a potential less-than lethal level of force?

It should. Unless you are using a light so powerful that you do damage to his retinas, you are exercising control over his behavior and delivering no injury whatsoever. At the same time you are minimizing the risk you experience in this low-light environment and greatly increasing the chance you stand of surviving or prevailing in the situation. Sounds like a win-win scenario to me. To accomplish this task you need to be proactive in a few things.

First, purchase a decent flashlight actually two of them. Redundancy is the rule for most high-risk work. Search and recovery scuba divers always carry two flashlights in case one goes down. Many police officers carry a backup weapon in case the primary is lost or becomes inoperative. As a law enforcement officer you’re going to operate in low-light situations a lot. Carry two of the most cost-effective tool you have.

Second, train, practice and work with them. Most folks I know believe that using a flashlight is a matter of turning it on, shining it around, looking where it shines and then turning it off. Or, and sometimes this is worse, they just leave it on all the time and scan with it in a nice predictable rhythmic pattern. If you use the flashlight improperly in low-light situations it becomes a beacon announcing your position and pace of movement to the bad guy. On the leading edge of this type of training is Strategos International (formerly SureFire Institute). The low-light operator training curriculum was developed by Ken Good, a former Naval Special Warfare operator, and Vaughn Baker, a veteran SWAT operator, and covers proper tactical use of flashlights for nearly all close quarters battle type of work along with a host of other related topics. This training, as it directly relates to the most frequently encountered high-risk situations police officers normally work in, is invaluable.

Third, educate your partner, or potential patrol working partners, about light and how valuable it is, most especially if you control it to your benefit. Proper use of light can permit team work that allows one of you to control a suspect, holding him pinned with nothing more than bright white light, while the other officer approaches and takes him down appropriately. The approach officer can close safely under the cover of darkness because everything outside the white light in the suspect’s eyes is pure darkness. Except for that white light, nothing else in his world exists with the possible exception of a disembodied voice telling him what to do and holding his attention to distract him from the movement of the approach officer. With no sensory input other than the light and voice the bad guy cannot use his vision for identification, navigation, balance or any of the other uses we identified above.

Finally, recognize how frequently you, as a police officer, operate in a low-light environment and what risks exist there. Act with positive aggression to reduce your risk and the risk of officers you work with.

Amaury Murgado - March 3, 2011
We use cookies to ensure that we give you the best experience on our website. If you continue to use this site we will assume that you are happy with it.OkRead more