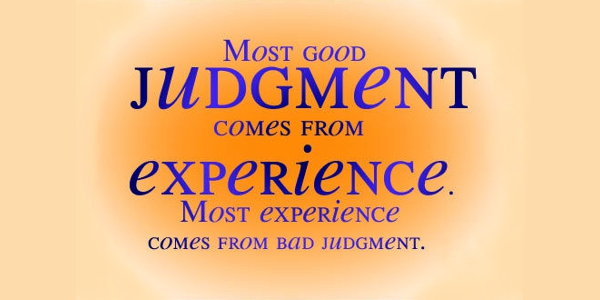 Knowledge and judgment comes from experience. Experience comes from good or bad judgment regarding life situations, which leads to evolution over time. That’s how Close Quarter Battle (CQB) and Defensive Tactics is built up and improved every day.

There is old story a Zen teacher told me “In the Zen temple at the time of evening meditation the cat that used to live there made too much noise. So the Zen teacher asked a student to tie the cat up each time they would meditate. After years had gone by, the teacher and the student passed away and so did the cat. A new cat was brought to the temple and the tradition of tying the cat was maintained. 100 years later, many Zen philosophies were written around how important it is to tie a cat at evening meditation…”

As you see, sometimes we do things and we don’t know the real reason we are doing it for. We just copy martial arts moves but do not understand them. If we don’t look for the reasons behind it all, or seek to uncover potential problems with doing things this way or another, we will not keep going forward and we may lose the real reason why the teacher tied the cat up in the first place (which may not have any current relevance). We may be missing the opportunity to advance to a better level in our training.

Thinking “outside-of-the-box” is the skill you must adopt as you teach CQB and defensive tactics. Life is random in many ways, and therefore you must be more random as a teacher and not follow the “curriculum”. If you teach in a box and in a frame that has a locked up curriculum, and you do not to think and analyze fast, teaching randomly will be harder than it seems. It is also harder for the students because you will demand from them to think, and most people don’t like to think. That’s why they fall in love with the misleading terms of “keep-it-simple”. They do not realize they are hooked on boxed-in systems based on knowledge of two moves…the “McKrav” schools that have two moves for any knife/ edged weapon attacks and gun disarming…moves which appear in historical manual books of the British officers Fairbairn and Sykes and later by legendary Col. Rex Applegate, techniques which contain deadly mistakes for today’s reality but are still taught as a “new” and innovative.

Avi Nardia Kapa Compatives™ has evolved through experience and knowledge, so those deadly mistakes are no longer made, but we continue to see them still recycled in the market as the “Official Israeli Martial arts “.

In real combat, we count on our sensors to get more information in “real time”. We use smell, vision, hearing, feeling and taste to receive feedback as to what is transpiring during the fight. That’s why it’s very important to attack your enemy’s sensors in a real fight/survival situation. If you fail to unbalance the enemy’s sensors, you are going to reduce your survivability.

This is the reason that Avi Nardia Kapa Compatives™ teaches first to attack the sensors to help us survive better. We target the enemy’s eyes, ears, nose, skin, nerves, and anything that will help us to make him disoriented. We need to remember that under CQB conditions, it’s not only what you can do to your enemy but also what he also can do to stop you. Most of the time he will have the first move because he surprised you and you will be under the first stress. Your sensors may be the first to be hit and you will be disoriented.

Books and DVDs By Steve Scott