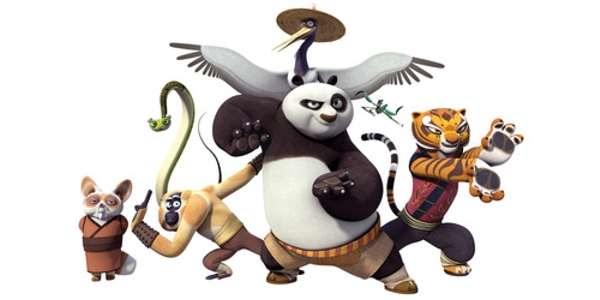 “Your training is a lonely war.”

When you train, you battle yourself. You wrestle your internal demons forcing your mind and body to bend. We all know the story of the sculpture who was asked how he carved such a perfect warrior from stone. He answered, “The warrior as already there, I just removed the excess stone.”

This week a very strange source reminded me that we already possess greatness and that our training is a way of releasing it.

“Truth comes from the mouths of babes.”

Any parent or school teacher can tell you how embarrassing it is to have a ten year-old make a simple observation which you overlooked because you are too intelligent and too old.

I am inventing my own old saying, “Truth comes in the form of a Disney cartoon.”

I saw Kung Fu Panda on its opening day in Manila, Philippines. I went back and saw it again the next day. The third day I was invited to my friend Nino’s divorce party, but the fourth day I was back at the cinema to hear Jack Black speak the truth.

I am back in Taiwan now, partly because of this movie, returning to my roots. Taiwan is where I began my Martial Arts Odyssey through Asia, seven years ago. The movie made me realize that, although I am a thousand times better martial artist (or maybe just a better fighter) than I was seven years ago, and have acquired knowledge and experience with martial arts in ten different Asian countries, I realized that somewhere along the way, I lost sight of my original goal. Originally, I had set out to use Kung Fu to unlock secrets about myself. My intent was internal. Instead my hours and hours spent in the gym, hitting the weights and hitting the bags turned my life into an external search. That would explain all the stamps in my passport.

An internal search could be done within the confines of a single room. It is called meditation. And while I don’t see myself meditating, returning to Taiwan will hopefully help me to regain the wonder and excitement I had at the beginning, and help me to remember why I started down this path in the first place.

And best of all, Kung Fu Panda stars Jack Black, one of the funniest and most talent men in Hollywood. Both of his kids movies, School of Rock and Kung Fu Panda can be thoroughly enjoyed by adults, while teaching us lessons that we, in our sophistication, have forgotten.

Not to spoil the surprise for anyone who is still planning to see the movie, but in a nutshell, Jack Black, playing the Kung Fu Panda, is recognized as the legendary “Dragon Warrior,” a great Kung Fu hero who will defeat Tai Long, the evil master. The problem is that the overweight Panda has never had a single Kung Fu lesson in his life. The legend says that once the Dragon Warrior is identified he should be given the dragon scroll, which will give him the secret to unlimited Kung Fu power.

Then Kung Fu Panda is finally awarded the Kung Fu scroll, he sees that it is blank. Dejected, he leaves the temple, convinced that he is not the Dragon Warrior, and that he will never achieve greatness. Back at home, the Panda’s father is a famous noodle vendor, who wants his son to take over the family business. The father made a fortune off his special dish called, “Secret Ingredient Soup.” Believing that his son is finally home to stay, and ready to take over the family business, his father shares the secret ingredient with him.

“The secret is nothing.” Says the father. “To make something special, you just have to believe it is special.”

The Panda opens the scroll and realizes that he can see his own reflection in the gold braid of the paper.

The message: “The secret ingredient is YOU.”

This movie was brilliant. Jack Black is fat and a little lazy, but his heart is in the right place. Most people would never think he could be a superhero or even moderately successful, but the secret of the Dragon Scroll teaches him that he is a hero. He is special, and he can be anything he wants to be.

The master also believes in the Panda but realizes he can’t train him the same way he trains the other masters. This was another excellent lesson. We are all different. We will find our own way to shine, our own way to be special. Buddhism teaches that there are many paths that lead to enlightenment. The commonality between them is that you have to work hard, stay focused, and have a good heart. Said another way, if you are a good person, you have the potential to be great. It is up to you.

When Tai Long, the most powerful master, steals the Dragon Scroll, he sees his reflection, but misses the message. He believes the scroll is a fraud. He missed the message because he believed his training made him great. The Panda got the lesson because he learned that he was born great.

We are all born great. Achieving greatness is just a matter of if we see it or not.

Remember that in the Chinese brand of Buddhism, we are all born with the potential to achieve enlightenment. The Panda kept asking the Master, “How can you turn me into the Dragon Warrior?” The answer is, the master can’t turn you into anything. You are already born The Dragon Warrior. The master can only lead you to discovering that fact and believing it.

The Alanis Morrissette song, “Thank You” says, “How bout remembering your divinity?” You are born with it. It is up to you to discover it.

The theme song of Kung Fu Panda also set me to thinking about the direction my life was going. Disney released three versions of the song. In the US it is sung by Cee-Leo Green. N Korea it will be sung by Stephen Colbert’s arch nemesis, K-Pop Start Rain. In the rest of Asia, Korea always has to be different, the song is sung by Filipino boy-star, Sam Concepcion. The movie promises to be one of the most poplar Disney movies ever released in Asia because of the fact that an Asian was chosen to sing the theme song. In the Philippines, Sam-fever has gripped the nation, catapulting the young lad to super-stardom overnight.

The new theme song is based on the old Carl Douglas song, “Kung Fu Fighting,” which to date, with the exception of the UFC theme song, seems to be the only martial arts related song to make it to the top forty. It appears to me that some enterprising young singer could carve out a niche for himself with the martial arts song genre the way Jimmy Buffet did with song about beaches, boats, and hangovers.

The new lyrics are directly base on the film and also convey an inspiring set of messages.

“If you are a natural, why is it so hard to see? Maybe it’s just because, you keep on looking at me.”

If you are looking for answers within yourself, then you need to look at yourself, not others. Don’t look for the approval of others. Seek your own opinion, believe it and live by it.

“Sometimes you gotta go, go on and be your own hero.”

This was the clincher. You can be your own hero. You can achieve whatever success you want. Dream, reach out, find your hero and then find the goodness in yourself.

On a personal note, I am glad that Jack Black taught us that you can be a Kung Fu master even if you are fat. I have hard time keeping the weight off my middle, and no matter how much I eat, it seems to stay there. From a guy lives on a training diet of fried chicken, Kit Kat bars, and Coke, I salute Kung Fu Panda, who taught us that we can all be Kung Fu masters. In fact, we already are.

Yin-Yang Code: The Drums of Tenkai-Bo