I was sitting up this morning alternately doing hand techniques and watching martial arts bios of various masters, teachers and actors. I recently had another back surgery and I was probably exercising my mind more than my body. I had gone through several bios of some of the luminaries in the arts when I came across an interview with the great martial artist and actor Gerald Okamura, an individual that I have admired for any number of years. In the interview he said something that I have been telling my students and anyone else that would listen concerning the deadliest weapon in the martial arts. Matter of fact it’s the deadliest weapon in the world and you can carry it with your person anywhere. It can’t be spotted by a metal detector and a pat down will not reveal its presence.

This year will mark my sixty fourth year in the martial arts. I have specialized in unarmed combat but I have always had a passion for weapons. I grew up in the inner city of one of the toughest and most violent cities in the U.S. I was gang related back in those days and saw the transition from knives and clubs, to zip guns and Saturday night specials to high quality handguns and automatic weapons. I’m a good shot and I have a concealed carry permit but my favorite weapon is still the tactical folder. I have studied any number of arts during these many years but I am primarily a karateka and aikijitsu/Japanese jiujitsu practitioner. My karate training was in the Okinawan systems and included kobudo or the usage of the traditional weapons of Japan and Okinawa.

I was almost born with a knife in my hand. Like many during that era it was the first weapon I gained proficiency in. During that time I also gained some expertise with blunt trauma weapons and whatever else was available at a given time. In the military I learned to shoot and found I had something of a natural ability with firearms. I like to tell my students that I can shoot the eyelashes off of a gnat. An exaggeration, of course but I am a more than decent shot.

I have known some pretty dangerous people in my days both in the military and in the streets but moreover in the martial arts. I am friends with several very dangerous individuals but one in particular who I think is one of both the most gentle and most lethal individuals in the world today. Coming from me that says something since I studied with the (self proclaimed) deadliest man in the world. I won’t include the name of the individual I refer to but he specializes in training our military’s elite units, special forces and American spec ops. I’m a pretty good sized guy at well over two hundred pounds and I’m pretty sure that I exceed his fighting weight by at least fifty pounds. Add to that the fact that he’s older than I am which means that he was probably trained by troglodytes. Even so I wouldn’t fight him on a bet. Not if there was any way around it. Fortunately I don’t have to worry about that since I count him amongst my close friends and I’m pretty sure he wouldn’t hurt me (I hope). His techniques are definitely more than effective but the thing that’s most frightening about him is that you can almost see his mind working, analyzing and making adjustments to his attacks and defenses even as he is twisting your body into shapes not generally associated with physical possibilities. Hence we see the most lethal martial art weapons at work; the human mind.

Aside from our prehensile thumbs our brains is what separates us from the common beasts of the jungle. I have a hundred and seventy pound dog that I’m pretty sure can bring down the biggest and most adept unarmed man. Taking into consideration that he wouldn’t be even a close match to lions, tigers and bears (oh my) what does that say about the physical prowess of the human being? Not much. That is if we speak of physical prowess. Fortunately it isn’t our physical prowess that places us safely and securely at the top of the food chain. I don’t care how adept you are in combat you aren’t a match for a fifty pound pit bull much less one of these apex predators. People hunt those monsters with high powered weapons and yet the coming of age of the young Zulu warrior involved killing a full grown lion with a spear. Being of African American descent I very possibly carry some of those bloodlines but I thank God that I didn’t share such a heritage. Because of my healthy respect for the lethality of the big cats lions, tigers and leopards and such are perfectly safe from me seeing that there is no way that I would face one with a spear much less unarmed.

Kung fu tradition tells of kung fu masters who killed tigers with their bare hands. Believe me those are only legends. Unless you’re Samson there isn’t much you could do unarmed against a big cat accept possibly act as pre dinner entertainment. Even so these major predators are almost extinct and many are on the endangered species list. Not because of our superior fighting skills. As far as lions and tigers are concerned we have no fighting skills. It’s our brains, our minds that set us apart. People generally hunt these dangerous animals with fire arms but people were killing them well before they invented guns. In a sense people generally thought them to death. They would assess the danger that they presented and figure out ways to kill them.

In all of your training and preparation for battles that hopefully you’ll never have don’t forget about developing your greatest weapon; the weapon that can enable you to take down a major predator or a larger adversary. Like the old Temptation song said back in the day, “Why don’t you check out your mind”. Meanwhile if you still think that you’re physically capable of taking down a determined predator I have a hundred and seventy pound pooch I would like to introduce you to.

Blessings to you, my cerebral warriors. 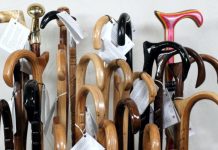