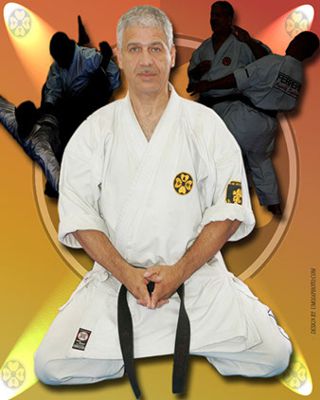 Lou Ferrer, was born on July 9, 1951 in Ponce, Puerto Rico. He graduated from Gardena High School in Gardena, California. He then attended Long Beach College also in California. He served in the United States Navy beginning in 1974 and was Honorable Discharge in 1976.

Lou Ferrer trained under many high ranking Black Belts in many different styles of martial arts. He trained under Professor Angelo L. Albergo, Soke in the Al-go InabikariRyu, Jujitsu, Judo, Karate, Arnis, the Art of Self-Defense, USA. He received his White, Yellow, Blue, Green, Purple and Brown Certificates. He was tested for his Shodan, Nidan, Sandan, Yodan, Godan, Shichidan, Hachidan and Kudan.

Professor Lou Ferrer, Sr. appeared in numerous newspaper and martial arts magazine articles throughout the years and won numerous trophies and awards. He was inducted into the Black Belt Hall of Fame and completed in kata, kumite, weapons, and self-defense in various tournaments.

Lou Ferrer is the proud father of five  daughters and one son. He has thirteen grandchildren.

For more information on Grand Master Lou Ferrer and the US Kodokan Federation please visit their listing on the Martial Arts Schools and Businesses Directory by clicking on the image on the left.

USAdojo - March 30, 2017
We use cookies to ensure that we give you the best experience on our website. If you continue to use this site we will assume that you are happy with it.OkRead more