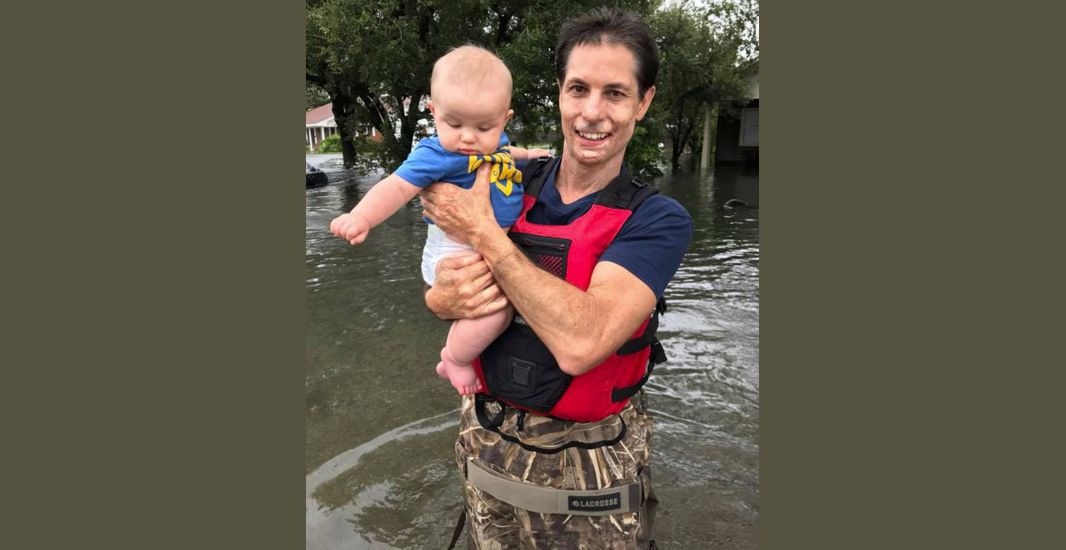 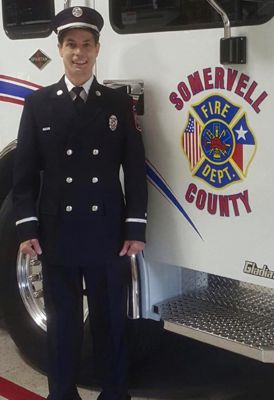 Even though martial artist Jamie Cashion and the rescue team. has been tried by fire and truly understands the life threatening dangers encountered during a disaster, he is still determined to make a difference against Hurricane Harvey. In 1986 he was burned in the line of duty as a fireman and yet continues to serve as a volunteer fireman with Somervell County Fire Department in Somervell County, Texas. Jamie Cashion is a 7th degree black belt in American Karate, an entrepreneur, and a motivational speaker who truly makes a difference in this world. When hurricane Harvey hit, Jamie was once again out the door and ready to help in any capacity he could. As his story here shares, even the flood waters of Hurricane Harvey would not deter his desire to help others.

I started 7 days ago working with Somervell County Fire Dept and twenty two other fire fighters from around Texas in Ingleside and Port Aransas. You have no idea how bad some of those areas were hit and the elements my comrades are still enduring to help those in need. After two nights I had a overwhelming calling to head to Houston. I placed a emergency request on Facebook for a ride from Ingleside to Houston.

My good friend Mike Cornelius called me. His boss had a employee agreeing to take me to Houston even during the hurricane. It was this man who risked his life that deserves the credit for what we are able to accomplish.

As we entered Houston all highways were closed and downtown Houston was completely under water. We were having no luck getting to my drop off point since we did not know the city. I saw a truck with two jet ski’s going down the opposite way on I45. I stopped the man and asked what he was doing? He replied that he and his 9 year old son had brought the jet skis out to ride on interstate 45, (thinking it would be fun), and ignoring the massive currents! I stopped him form making a dreadful mistake and urged him to direct us to Cypress via back roads. He graciously spent a hour plus getting me there. As we were driving I called Troy Brewer and requested that he donate funds to pay a swift water rescue team for rescue ASAP! Troy never gave it a second thought. Then I was told the Somervell Sheriff Alan West deployed many officers and a boat lead by Dwayne Griffin. Now I had a team to meet so we could get in rescue mode for the next day!

I finally made it to Cypress/Spring and I had the driver pull into a gas station where I saw a truck and a boat, There were two young men (A&M Aggie’s I never even got their names) in a truck with a small boat. I jumped out and asked them to take me in their boat to a drop off location so I could hook up with a group Erin Davis-Heineking had in Houston. By the way if Erin Davis-Heineking had not posted she had boats going to Houston, there would’nt be a story to tell! God bless you Erin Davis-Heineking. Due to road closures, I could not get to my group and met up with Daniel Rodriguez. Daniel was escorting Constables on his air boat to chase active looters who were shooting at rescuers. (See his Facebook page for the story). 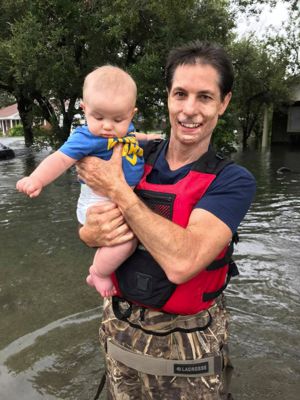 I was then put in touch with someone in Erin’s group, Troy Moncrief and his cousin Ross Brewer. I MUST say, these are another two real HERO’S! Troy navigated our small boat, that had been donated by Jeff Gilbert and Fun N Sun Boats, (this boat got pretty beat up), through the super swift water that swallowed up many larger sheriff boats and thousand of cars and trucks. Ross Brewer was the first to be in the water everywhere we stopped, even with the snakes. We worked the area and encountered many rescues and witnessed the evacuation of a huge nursing home, residents and many apartments. We had one rescue where a man was trapped and he insisted on jumping from the second story balcony into my and Troy Moncrief arms because he was so freaked out. He was in awesome shape and looked liked a triathlon competitor but, in these situations, nature proves just how small we are. By the way it is very difficult to catch someone in a small boat in a major current from a second story balcony. We also encounter many people who decided, unwisely, to stay behind (first floor flooded) so that they became trapped on the second floor with infants and some treated the situation like a Super Bowl Party! MANY argued with me saying they could live two weeks or more with no running water in a flooded home, no electricity and forget about all the waste (some chemical from the plant exploding) and raw sewage in the water.

Saving a man trapped on a balcony.

We worked Sunday through Tuesday and then we hit a BIG SNAFFU. I accidently put a rescued family’s belongings in a dry bag that contained Troy’s truck keys. The rescues were being shipped to shelter’s and we would not see this family again. We were stranded in the rain with a boat in the water and no keys to our truck. Then SUPER MAN Jon McDaniel offered to drive Troy’s spare set from Fort Worth to Houston. Jon stayed and joined our rescue efforts.

Rescuing people and animals from the aftermath of Hurricane Harvey.

I returned home on Thursday for two hours for some rest, and thinking I was done, I got a urgent dispatch that Orange Texas was in imminent danger of flooding and needed rescuers. I put out a all call and many friends responded. My buddy Kelly Free insisting on helping with his boat. After 2 hours I was back on the road to meet Kelly. We got in Madisonville at 2:45am, slept a few hours then got back on the road for a long adventure that took us to Orange, Vidor, Rose City (Rose City is no more!), Beaumont, Port Arthur and HOURS and HOURS off driving through very high flooded roads!

We meet so many new friends from all over the U.S. who joined our group. The local police and DPS were STELLAR allowing me to provide a NON obstructed path for my team (since I have lights and sirens on my truck) to the URGENT rescues. At times they even had me fall in behind there swift water rescue teams to bust through the traffic jams. I MUST SAY who ever started The ZELLO app should receive The Pulitzer Prize!

The Cajun Navy SAVED LIVES and were heavily armed, they were NO JOKE and very very organized! These groups were manned by hundreds of dispatchers from all over the country who appeared to have it more together than the Texas authorities and were actually dispatching to the National Guard, PD, FD and thousands of rescuers. Folks like William Wallace and Susie Moore (who I fondly call The Guardian Angel) we amazing! Korey Brewer was a saint (Mother Teresa Junior). Her son Jonathan and daughter Ashlyn gave up their rooms to allow us to sleep and their church hosted the team I was with, even feeding them rib eye steaks!

In closing I thank my Lord Jesus for keeping me and all my friends safe during these efforts. I am so blessed with so many friends that keep me and our team covered in prayer. I have NEVER witness the pouring out of help and people putting their lives on line to save others. I have witness near death experiences so many times and seen so much destruction, and I know I am alive because of prayer, prayer works!

Unless you were in Houston, or the gulf coast, you cannot comprehend the true devastation of over five hundred thousand homes, three million displaced residents (roughly 13% of the USA population). I believe this will be the most catastrophic event to ever hit the United States. There will be a massive casualty rate, but the end result will be the coming together of people demonstrating love and compassion to rebuild and help in the healing process.

I thank God for putting me in a position to help and I thank God for all the people I mentioned, and those I didn’t, who saved lives and may never know it!