It may be hard for some of you to believe but there was a time when I actually taught traditional karate. I’ve had several traditional karate dojo in my martial art career and at various times taught both karate (shorei goju) and a smattering of judo. Of course that was back in the Jurassic period, even before the dark ages. My students wore loin cloths and animal skin karate gis.

I’ve been involved in the martial arts for most of my life. My father was a WW II Marine and MP and had a pretty good grasp of what was then called combat judo. He was adept at hand to hand combat and showed me enough when I was a little tyke to fire my imagination and inspire me to want to study martial arts. At ten years old I was recruited by a friend’s father who had a brown belt in judo to study with his son so he’d have someone his own size and age to practice with. He also taught a boxing course at the Washington Park field house. Though I was more interested in wrestling at that time I tried my hand at that also. In nineteen fifty nine when I was twelve years old I started my formal study of judo and jiu jitsu at the Jiu Jitsu institute under Mas Tamura. In nineteen sixty-two I was introduced to karate (shotokan) and studied under Shojiro Sugiama. I met John Keehan (Count Dante) and the rest is history.

I had an opportunity while in the military to spend time in some of the places where the martial arts were born and came of age. I was married right out of boot camp so I wasn’t out chasing skirts in my spare time. Instead I spent every spare moment while in those countries availing myself of whatever training was available for G.I.’s. I received my first dan rank from a Filipino instructor who taught Chaun Fa (Chinese Kempo) and Kundau. Since that time I’ve received a numberof black belts or the equivalent in several traditional and nontraditional systems. I have managed to accrue several advanced dan ranks in a number of fighting arts. As some of you know I was also responsible for founding two related combat systems and I head a martial art organization.

My martial art career has been an evolution of skill and knowledge. I have trained more students than I can count and have promoted a number to black belt. In the process of training my students I learned as much as, if not more than, they did. If a martial art instructor stops being a student he will stop learning. Our journey in the arts is progressive. We will either grow or we will digress. There is no standing still. If we are alive we will continue to grow.

There have been many lessons along the way that have affected my growth and understanding in the arts. One of the greatest defining experiences in my martial art career involved teaching women. When I was studying karate we had few if any female students. The classes were conducted with a military brutality reminiscent of boot camp back in the sixties. They were brutal. A day without a split lip, bloody nose, chipped tooth or a sprained or broken digit was not a good class. Karate classes in those days were defined by blood, guts and gore. 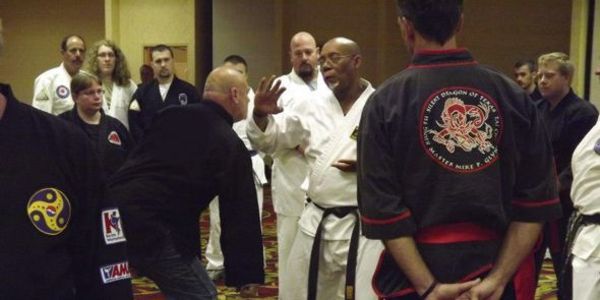 In my early career as a teacher I taught mostly young men. Living in the inner city of Chicago and having grown up street tough I liked teaching the more aggressive individuals that sought me out. Not many timid individuals, probably the ones who needed the training most, stayed with me. Classes generally ran for three or four hours and usually ended when the last student fell broken and bleeding to the dojo floor. I never considered teaching women or children. I wanted to train warriors.

In the early seventies I was approached by a group of women who asked me if I could teach an anti rape class. At first I refused but mine was the only school in the neighborhood and these ladies were desperate. There had been a rash of brutal attacks on women in the neighborhood. They convinced me that if I had anything that resembled compassion I would teach them how to defend themselves. I knew absolutely nothing about teaching women and I didn’t have the foggiest idea what would comprise an anti rape class. I quickly found out that I couldn’t train them the same way that I trained the thugs that I liked to call students. First of all they weren’t capable of doing what I demanded of my male students. If I trained them like that they’d probably stand a better chance with the assailant who stalked the neighborhood. They didn’t need or want my sadistic concept of training. So I was forced to reexamine what I was teaching and how I was teaching it. I taught the class and my female students learned and several became pretty good. A few stayed with me beyond those classes and studied the system (modified) that I had been teaching my regular classes. They learned but teaching them was an education for me and made me reexamine myself as a martial artist and sensei.

As I fore stated, I had taught mostly young me, like me, most of them just out of the military. I was a spec ops type in the military and those were the types that I wanted to teach. Teaching women redefined my methods of teaching. It also took me back to my basics. I wasn’t too strict about form with my male students. If they weren’t precise with their techniques they were usually strong and athletic enough to muscle their way through the technique. Not so with the women. They didn’t possess the raw strength to fudge their way through an imperfect technique. It frustrated me to no end. I couldn’t just demonstrate the technique once or twice and leave them to their own devices. They required more hands own instruction. Teaching them made me revisit the science behind the art. I had to relearn the physics and the other factors that made those martial art techniques superior to stylized street fighting. They had to be precise with their application if the techniques were to work for them. In the long run I became a better instructor and a better martial artist for that experience. Amongst other things it made me abandon the fancy techniques that I had been teaching and go back to basics. In the long run, basics are what comprise the arts. It’s what works in the real world. Those flashy techniques are cool for demonstrations but they are difficult to execute on the streets. Karate’s most efficient weapons are its most basic. A reverse punch. A front kick. A knife hand. Simplicity is your best ally in a fight.

Karate is a journey. It isn’t perfected over night if at all. It requires time and effort. There are no secret techniques or magic formulas involved. If the secret is hidden it is hidden in plain sight. Karate is complex but it is complicated only in its simplicity. A young student will be fascinated by the high kicks, the spinning kicks and the fancy hand combinations. They want to flip, tumble, summersault and fly through the air. That’s part of being young but as we continue to train them they will have to grow past those childish views of the arts. That is if they are going to become proficient fighters. Flash draws attention and may even attract a few students but it’s just tinsel and window dressing. It is up to us as instructors and sensei to teach the real martial art, not the kung fu movie version. Life is real and it demands realistic solutions.

Thank you for listening to my martial arts rambling of an old man. I appreciate your patience and forbearance. Like many my age my martial arts ramblings and get kind of wordy. It takes a while for old folk to get to the point sometime but if you’re patient and attentive enough to listen we octogenarians can occasionally include a word of wisdom in all of our pontificating. It’s up to you to separate it from the superfluous rhetoric.