Home Who's Who Master Seiko Higa In My Memories 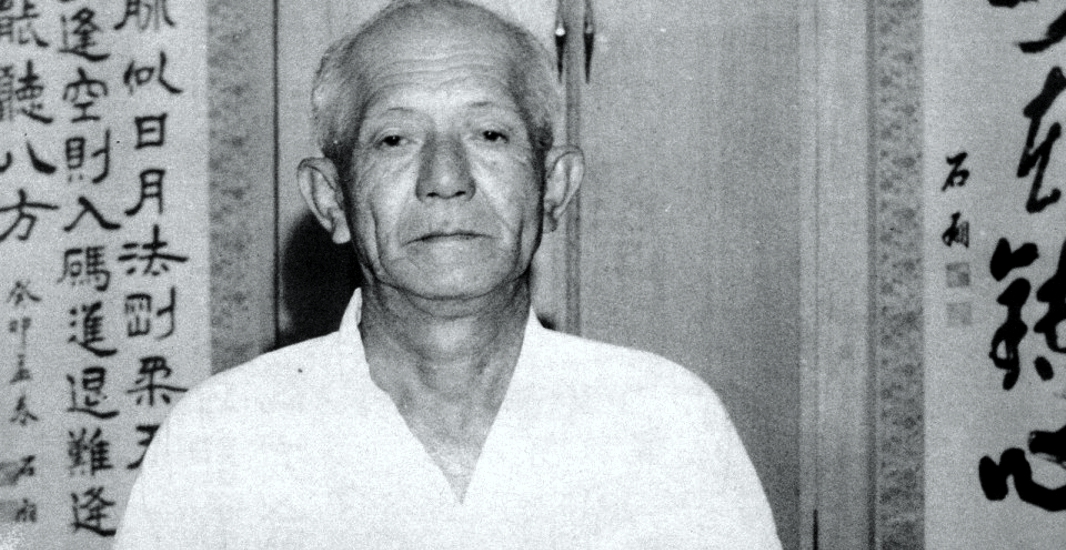 Remarks: The original Japanese title of this article was “Omoide No Higa Seiko Sensei” and it was written by Mr. Saburo Higa, an acupuncturist and translated by Sanzinsoo . This article appeared in the book, “Karate Denshinroku” (True History of Karate) by Akio Kinjo, as a supplementary article. Pages 326-331 (Okinawa Tosho Center, 1999)

I joined Itoman Dojo, a karate academy of Master Seiko Higa, in October 1952. At that time, the Dojo was located in front of Itoman Elementary School and faced a bus road. At the corner of the Dojo, there was a carpenter’s workshop. I met with Mr. Akio Kinjo for the first time in November 1955 when he was waiting for Master Seiko Higa at the Dojo. He was a student of Ryukyu University and devoted himself to practicing karate.

Although in the chaotic times after World War Two in Okinawa, there were a lot of excellent students in Itoman Dojo such as Juei Tamaki, Seikichi Toguchi, Seiko Kina, Soko Yamakawa and Choshin Ishimine who was a promising young disciple. We sometimes stayed at the Dojo. Soko Yamakawa had a sense of humor. He and Kanki Izumikawa of Kawasaki-shi joined the Dojo at the same time. Yamakawa’s karate feats in battle were famous when Master Seiko Higa was teaching karate in Saipan. Those senior students really admired and respected Master Seiko Higa. Subsequently, they opened their own Dojos and laid the foundation for propagating Goju-ryu karate.

Seiyu Nakasone of Tomari-Te style who was a carpenter often visited the Dojo and studied the fundamental Kata, “Tensho”. He was concentrating on his practice of “Tensho” until he fully understood it. Master Seiko Higa often said to us, “Brother Kaa Kaa (His nickname was “Kaa Kaa” as he always stuttered.) is an expert in Shorin-ryu of Tomari style. However, he was well impressed with “Tensho” of Goju-ryu and its step. He is convinced “Tensho” is so real and genuine that it alone is enough to study.”

At that time, we had neither a gas cooking stove nor a kerosene cooking stove, so Master Seiko Higa cut pieces of board and burnt them to boil water for making tea. He did not drink alcohol at all. He liked drinking tea and smoking “Lucky Strike” brand cigarettes. When he had free time, he walked about and visited his friends or students to have a chat. Later, he got a job as a karate instructor at Okinawa Prison, and he could somehow make a decent living.

I made five friends of mine enroll in the Dojo. I also brought enough tea to the Dojo from my home. Those things delighted Master Higa. The training times at the Dojo became fixed. Miss Kanako Ishikawa, the first female student, and many others enrolled in the Dojo.

Near the end of December 1952, we had a party at the Dojo. We bought a goat. We butchered the goat by ourselves and cooked it for the party. Mr. Miyahira, a calligrapher as well as a local government worker for Itoman City, wrote the name of our Dojo on the signboard. We hung the signboard that says “Itoman Goju-ryu Karate Dojo, Nippon Butokukai Renshi, Higa Seiko” (= Goju-ryu Karate Academy in Itoman City, Chief Instructor: Seiko Higa who was awarded the title “Renshi” by Dai Nippon Butokukai) at the entrance of the Dojo.

After practice at the Dojo I often had a chance to listen to so interesting stories about karate told by Master Seiko Higa that I almost forgot to go home. Unfortunately Master Higa’s wife had already passed away and it was the poverty times just after World War Two, so he was forced to live inconveniently. I sometimes invited him to my house for dinner and we had a chat about karate. The followings are some stories told by Master Seiko Higa.

(1) Seiko Higa was a relative of Anko Itosu of Shuri-Te style. Anko Itosu taught young Higa when Higa still worked as a policeman in Shuri. Itosu was a gentle and affable person. Once Itosu said to Higa, “Ushii Higaonna (“Ushii” was a nickname for young Kanryo Higaonna.) had a powerful physique.” Itosu spoke politely even to a maid. Higa respected him.

(2) Seiko Higa’s father and grand father remembered To Ru Ko (= Ru Ru Ko) and Wai Shin Zan as military officers of “Left and Right” (= maybe it means a commander and a vice commander?) when the representative of Chinese Emperor came to Ryukyu Kingdom (= now Okinawa) for the last time.

(4) Kanryo Higaonna went to Fuzhou, Fujian Province, China. He saved a drowning girl during the floods. She was a daughter of Ru Ru Ko, so he was accepted as a direct disciple of Ru Ru Ko. Higaonna’s kicking technique was the best among the students of Ru Ru Ko.

(6) Kanryo Higaonna showed students the position of a fist, its movement and so on with his short round stick. He seldom touched their bodies. During the practice he had never glared at students. He always taught them with a gentle look.

(7) In the beginning, originally, they performed Sanchin with open hands. They struck with Nukite (= spear-hand). Different from today’s hard breathing sound, they breathed so silently that the others could hardly notice. Also different from today’s Sanchin training, the teacher never struck shoulders of students. There was no such a training method.

(8) “Matsu (= the childhood name for Chojun Miyagi), stop before you turn at a street corner.” said Kanryo Higaonna to Chojun Miyagi. He often gave Miyagi cautionary advices. Miyagi told his teacher that they were burdensome for him. Higaonna replied, “You should have a cautious manner. Make it your habit. Only Nanji (= practicing hard) is not a martial art.”

(9) It seemed that Chojun Miyagi went to Fuzhou, China not for studying martial arts but for a minor business. After returning to Okinawa from China, he asked Kanryo Higaonna, “In China, I saw they were breathing with making sound ’Huu Huu Haa Haa’ like a roar of a very large snake when they were practicing Sanchin. What do you think of this breathing method?” Higaonna replied, “Theirs is genuine. Ours is genuine, too. What I have taught you so far is authentic. Everything is slow to mature. Training from the inside is genuine. You are still full of youthful vigor.”

(10) Thinking about a technique of karate, Chojun Miyagi got up even in the midnight and studied it. In order to devote himself to studying karate, he left a five-year middle school before graduating when he was in the fourth grade.

When Chojun Miyagi was young, he visited karate masters of other styles such as Anko Itosu and Chotoku Kyan. In those days, there were no Ryu or names of karate styles, so karate masters from various styles gathered together and held a meeting called “Bu No Hyoji” (= a forum on martial arts?). At the meeting, they talked about karate techniques, read a Ryuka (= an Okinawan poem) aloud and drank Sake (= an alcoholic drink made from rice). It was something like a friendly party. Chojun Miyagi was the youngest among them.

(11) Chojun Miyagi had a match of applying joint locks with Kentsu Yabu and Choki Motobu.

(12) Chojun Miyagi visited Hawaii to teach karate. There were a lot of professional wrestlers and tough men in Hawaii. Using skillful technique, he dealt with their strong grip.

(14) When Jigoro Kano, the founder of Judo, came to Okinawa, Chojun Miyagi demonstrated not only Kata but also Yobi Undo (= Preparatory Exercise) in Horai Ryokan Hotel. Jigoro Kano was especially impressed with Yobi Undo. It inspired him to create Judo Kobo Taiso (= Offense and Defense Exercise of Judo) later.

(15) The origin of the name “Goju-ryu” is as follows. Jin-an Shinzato participated in a martial arts festival held in Kyoto Butokuden to demonstrate karate. There he was asked what the name of his Ryu or style was. As a makeshift reply, he answered that it was Hango-ryu (= half hardness style). After this happened, Chojun Miyagi and Jin-an Shinzato were aware of the need to name the style of their karate. Then the name of their karate style became “Goju-ryu” (= hardness and softness style), which was derived from “Ho Donto Goju”, a phrase from “Okinawa Den Bubishi”.

(16) Chojun Miyagi never demonstrated karate in public, except when members of Japanese imperial family visited Okinawa or when he was asked to demonstrate karate at a very important event held by Okinawa Prefecture Government. Except such cases, he never held Enbukai (= a martial arts assembly for demonstrating martial arts techniques). He was only invited to Enbukai held by his students. Master Seiko Higa said, “My teacher, Master Chojun Miyagi, was like a Buddha.”

The above-mentioned are just a part of many stories told by Master Seiko Higa.

I have seen Master Chojun Miyagi was teaching karate at the Police Academy in Naha. At that time, I felt as if a beam of searchlight was shining from his eyes.

Whizzing through the air, Master Seiko Higa performed Kata. His performance was very excellent and energetic. Everybody knew that his performance of Kata was beautiful.

Master Seiko Higa was the closest disciple of Master Chojun Miyagi. He attained the Truth of Goju-ryu karate, and he tried to keep it.

At a party, Master Seiko Higa also danced “Manzai Tichiuchi”, an Okinawan traditional dance. He was mild-mannered and gentle like a spring breeze. He was free and flexible. He was a genius of karate-do.

Emil Farkas: The Man, The Magician, The Martial Artist

USAdojo - November 26, 2013
We use cookies to ensure that we give you the best experience on our website. If you continue to use this site we will assume that you are happy with it.OkRead more