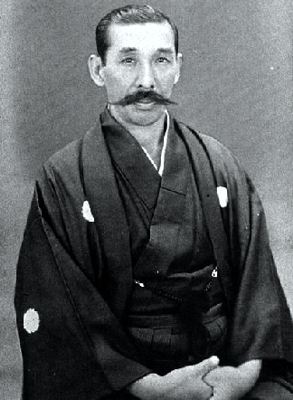 Hakudo Nakayama was born on February 11, 1872 and he was also known as Nakayama Hiromichi. A Japanese martial artist, he was the founder of the iaido style Musō Shinden-ryū. He is the only person to have received both judan (10th degree) and hanshi (master instructor) ranks in kendo, iaido, and jodo from the All Japan Kendo Federation. In addition, he held an instructor’s license in Shinto Muso-ryū and a Menkyo kaiden in Shindo Munen-ryū making him the 7th soke of that system. He was the 18th and last Sōke (head master) of the Shimomura-ha (branch) of Hasegawa Eishin Ryu Iaijutsu.

Hakudo Nakayama was born in Kanazawa City, in Ishikawa Prefecture, in 1872. He moved to Tokyo when he was about 19 years old. In Tokyo, he began training at the dojo of Shingoro Negishi of the Shindo Munen-ryū. In time, Nakayama became a master of Shindo Munen-ryū kenjutsu.

Hakudo Nakayama taught at the Yushinkan Dojo, near Korakuen in Tokyo, and he trained many of the top swordsmen of his day. He was a personal friend of aikido founder Morihei Ueshiba, and he was instrumental in arranging the marriage between Kiyoshi Nakakura and Ueshiba’s daughter, Matsuko.

By the mid-1920s, Hakudo Nakayama was one of the most famous swordsmen in Japan, and as such, he was made a leader of the committee that drew up the sword curriculum for the Toyama Military Academy. He is considered by many to be the father of Toyama swordsmanship. Nonetheless, Kimura Shoji wrote in 1926:

The ethics of swordsmanship, Mr. Nakayama wishes to clarify, is not in aggressive manslaughter. It lies primarily in psychic training. In the same manner in which the Yogis developed their physical inhibition to attain meditative states for higher psychical conditions, kendo trains the nervous system to respond, making awkward conscious efforts into reflex. The instrument, the sword, is necessary to give that serious frame of mind. What is more serious than life as forfeit for mistakes or inattention? The cold, mirror-like glimmer of the blade facing you, you cannot but be serious. The behavioristic school of psychology is well in accordance to this principle.

Hakudo Nakayama was an active promoter of New Swords (e.g., modern swords made in the traditional fashion). Often, this involved cutting demonstrations. For example, on July 10, 1934, Nakayama publicly demonstrated the strength of New Swords by using one to cut an iron bar about the thickness of a man’s finger. The bar had been wrapped in straw, and Nakayama cut it with a single stroke, without leaving a mark on either the table or the blade. The Japanese Sword Institute had forged the sword; the smiths were students of Kurishara Hikosaburo. Unfortunately, such high quality swords were too expensive for mass production. In 1941, New Swords typically cost ¥2,000-¥8,000 (US $1,000-$4,000).

At the end of World War II, Hakudo Nakayama was quick to advise Japanese people to greet Allied troops with grace, saying samurai never mouthed what was finished. He said:

In fencing we call this spirit ‘ohen’ or adapting one’s self to the change. In other words, it is a condition where after realizing and acknowledging the natural tide of affairs, all past ambitions are given up and a state of nothingness is reached. This requires magnanimity of heart. It is the ultimate meaning of the art of fencing. We must greet the Allied Army with just such a spirit. Yesterday they were enemies but today they are no longer so. If we cannot think of them as being no longer enemies, then it cannot be said that we truly understand the spirit of bushido. If there is the least feeling of ill-will harbored in our hearts and if we cannot take a broad outlook, it is bound to show in our faces and attitude, giving reason for others to think of us as cowardly. I believe that the greatness of a nation lies in its broadminded attitude.”

Hakudo Nakayama lived this advice himself, and as such, he was involved in the establishment of the postwar All Japan Kendo Federation.

Hakudo Nakayama was also a poet and calligrapher. A sample scroll reads: