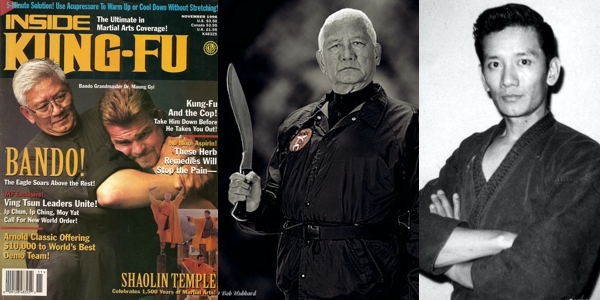 Dr. Maung Gyi is a Burmese martial artist who was born in 1936 in Burma. In his early twenties, around 1960, he introduced Burmese Bando into the United States.

Dr. Maung Gyi was born and raised in Burma, now known as Myanmar. His father was U Ba Than Gyi an he was the Director of Physical Education and Sports in the Burmese Ministry of Education. After WWII U Ba Than Gyi was posted in Mandalay, and later in the 1950s, he was transferred to Rangoon. U Ba Than Gyi encouraged his son to maintain good health and to participate in both individual and team sports and especially to practice in different martial arts systems.

Maung Gyi established the American Bando Association (ABA) in Athens, Ohio in 1966. He then worked to promote modern Burmese Bando and was accepted into the community of Asian martial arts in the United States. Maung Gyi was an accomplished martial artist, an author, as well as a scholar of psycholinguistics and communications. He was a self-confessed Christian, and often incorporates Biblical content into his instructional curriculum. Dr. Gyi was a Professor at Ohio University in Athens, Ohio for thirty years. He was also a speaker/instructor and seminar director for the Burmese Thaing/Bando martial arts, and he taught the Burmese Healing Arts of Min Zin. He also worked and trained extensively with many World class martial artists, including Guru Dan Inosanto and World Kickboxing Champion Sensei Joe Lewis.