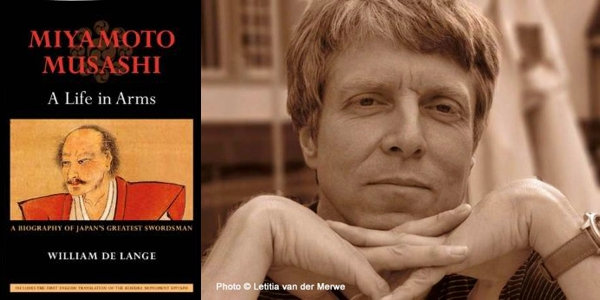 [Miyamoto Musashi: A Life in Arms by William de Lange] is one of those rare books on the martial arts that really deserves the title “Must-read”. Not only does it shed much-needed light on the facts of Musashi’s life, but it brings us that much closer to getting a picture of the man behind the myth… it almost feels as if a new book of the Bible were only now being translated from the ancient Greek and published in 2010. Jeff Broderick — Kendo World, January 2011

Miyamoto Musashi is the most revered and celebrated swordsman in Japanese history. Yet few of the many works on the enigmatic warrior have hewn to the original sources. Fewer still have explored the emotional turmoil that drove him on to be the very best in his field. This is the first biography to fulfill those aims, and to take advantage of a wealth of neglected or newly uncovered material.

William de Lange has translated all known extant texts on Musashi and draws on his research to illuminate controversial or even unknown events of the swordsman’s life. These include the source of his troubled relationship with his father, his whereabouts during the Battle of Sekigahara, his unheralded heroism in the summer siege of Osaka castle, and his adventures over the years that followed. We learn of the hidden anger that impelled him to kill his first opponent in duel at age twelve, his single-minded destruction of the reigning Yoshioka sword clan, and his meticulously orchestrated showdown with the great Sasaki Kojiro on Ganryu Island. And finally we follow the remarkable gestation of his Book of Five Rings, the summation of his martial philosophy.

Surpassing his teachers and peers Musashi created a school of swordsman- ship unprecedented in Japanese martial history, the art of fighting with two swords: Niten Ichi-ryu. Yet throughout his life a yearning for respect was overshadowed by his disdain of authority; an attraction to the mayhem of battle competed with a joy in the contemplation of beauty; and a ceaseless quest for perfection in his art denied him the emotional ties for which he longed. The complex portrait of Musashi that emerges here is a far cry from the one-dimensional caricature in film and folklore.

From the Author
Interview with the author (excerpt):

Q: How did you begin the process of telling his story?
WdL: The first thing I did when I began my research was to look what original sources there were on Musashi. Of course there is Musashi’s own Book of Five Rings, but sadly, Musashi spends only half a page in describing the event of his life. I therefore had to look elsewhere, to accounts of Musashi written by his contemporaries or their close descendants, who wrote down what was passed down to them by men who had known Musashi alive.
I soon found that, in spite of widespread belief, there actually is a great wealth of different sources, some more, some less reliable. I also found that though various authors who had delved into Musashi’s life had come across these text and and quoted from them, no western author had thus far taken the trouble to translate these texts in full.
It was then that I decided to carefully translate all surviving text on Musashi before I set out to write the actual biography of Musashi’s life. I wanted to become intimately familiar with every scrap of ancient writing that mentioned Musashi. In all I found more than thirty classical texts comprising some 150.000 words–original accounts of duels, battles and sieges, local histories, clan records, correspondence, family lineages– all written during Japan’s feudal era. Two of these texts, the Bushu denraiki and the Bukoden, have meanwhile been published.

Q: What about Musashi intrigued you the most during your research?
WDL: What was it that drove this bright yet far from privileged young man to become the best in his field? What was it, that drove him to dedicate all his time and talent to master such a difficult and dangerous art, and why was he willing to sacrifice love and a safe home in the uncompromising pursuit for perfection?

Q: Why do you think so many people around the world have found such deep inspiration from Musashi’s legend and his real life?
WDL: I think that most people, including myself, are struck by his fierce independence of mind. At no stage in his life did Musashi truly submit to any form of authority, choosing instead a solitary life and only serving various warlords in the capacity of adviser. I think it is that spirit of independence that shines through, not only in his unique style of fencing, but also in his writing, calligraphy, and painting. He is a truly unique individual, with an absolute belief in his own abilities and approach to life and its inevitable difficulties.

From the Back Cover
Praise for The Real Musashi: Origins of a Legend:

[T]his is one of those rare books on the martial arts that really deserves the title “Must-read”. Not only does it shed much-needed light on the facts of Musashi’s life, but it brings us that much closer to getting a picture of the man behind the myth… it almost feels as if a new book of the Bible were only now being translated from the ancient Greek and published in 2010. Jeff Broderick — Kendo World, January 2011

A brilliant book, brilliantly translated and annotated (meaning explained rather than pictures!) and a must for the bookshelf of every Japanese swordsman and Musashi enthusiast. I unreservedly recommend this book. — Dr. A. Sahal –Amazon UK

De Lange is particularly good on just this sort of thing, laying the historical context out clearly and providing extensive notes and background on the major figures involved…He gives a valuable explanation of the relationships between these major sources, which goes a long way to helping us understand the roots of the legend. Christopher Hellmand, author of The Samurai Mind

About the Author
William de Lange studied Japanese language and culture at the University of Leiden and at Waseda University in Japan. He is active as a translator and interpreter, and is a practitioner of the Shinkage school of swordsmanship. He is the author of The Real Musashi: Origins of a Legend, The Bushu denraiki and The Bukôden, the multi-volume series Famous Samurai, and Through the Eye of the Needle: The First Dutch Expedition to Reach Japan.

Biography
William de Lange is the author of books, ebooks and apps on Japan’s traditional culture, from history, samurai culture, to arts & crafts, and language dictionaries.

Bio: William de lange was born in 1964 in Naarden, the Netherlands to Dutch and English parents. In the late 1980s, he aborted his English studies to embark on a journey that eventually led him to Japan, where he supported himself by making traditional Japanese scrolls and writing articles for the Japan Times Weekly. On his return to Holland, he entered Leiden University to make the highly controversial issue of the Japanese press clubs the focal point of his Japanese studies. In 1993, he returned to Japan on a scholarship of the Japanese Ministry of Education. Following his graduation, he lived in Japan for most of the remaining decade, studying the art of Japanese fencing under Akita Moriji sensei, eighth dan master of the Shinkage-ryu. He currently lives in the Netherlands, where he spends his time writing and translating books on Japanese subjects.

MIYAMOTO MUSASHI: A Life in Arms | Part 3: Musashi in His Prime

MIYAMOTO MUSASHI: A Life in Arms | Part 4: Settling Down