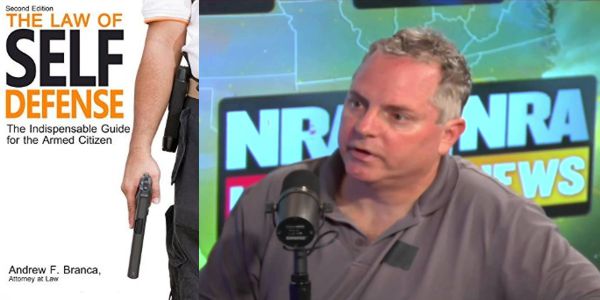 A Sad Story (And a Warning)
One night Marcus went to a party with his girlfriend, Rebecca. Walking in they saw a raucous crowd surrounding a guy pinning someone down. Never one to just watch a man get beat up, Marcus intervened and the guy backed off, letting go of his captive. Unfortunately, he and his buddies began threatening Marcus instead. Trying to avoid further conflict, Marcus quickly walked away.

In the confusion he had lost track of Rebecca, so he went to their car to wait for her to come out. Unbeknownst to him, two of the guy’s buddies followed him and hit him from behind, knocking him to the ground. Forced to defend himself, Marcus killed one and wounded the other.

Fortunately for Marcus, he survived his encounter. Unfortunately, he was not as good at protecting himself against the legal system. Three harrowing years later, Marcus’ manslaughter and felonious assault convictions were upheld and he was sentenced to 15 years of prison.

Avoid Marcus’ fate. Mr. Branca’s book will show you how to maneuver your way through the justice system, avoiding that harrowing multi-year process of arrest, trial, conviction, sentencing, and appeals.

About the Book
The world isn’t always a nice place. That’s why it is important to take steps to protect yourself and your family. Whether it be that shotgun in the corner, the sidearm on your hip, or the pepper spray you gave your daughter, you, the armed citizens meet that fundamental responsibility. 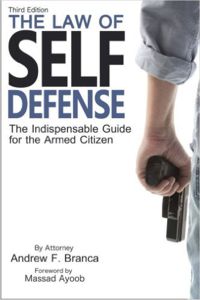 If you’re like most people, your preparations for self protection still lacks a critical element. You still will need to know how to survive the critical fight that looms after any defensive encounter: the legal battle. The Law of Self Defense provides precisely that critical, missing knowledge.

This book includes not just the laws of all fifty states, but how the courts apply those laws. It’s a plain-talk analysis that makes the law easy to understand for anyone, not just lawyers. Bestselling author, Andrew F. Branca, is not only a lawyer and internationally recognized legal consultant, but also a life-long member of the gun community–more than 20 years as an NRA Life Member and Instructor, an IDPA Master-class competitor, and a 2nd Amendment absolutist. Learn how to make fast, effective decisions and confidently handle life-and-death situations both tactically and legally. Read This Book And Learn the Powerful Legal Truth That Can Safe Your Life, Wealth And Personal Freedom.

Branca is one of the most knowledgeable and thoughtful commentators on self defense, and quite frankly he has had a profound effect on my own thinking. Everyone who owns a gun should also own, heck, memorize, Branca’s book. Michael Bane, CO

About the Author
Andrew F. Branca is an internationally recognized expert on American self-defense law. Now in his third decade of practicing law, Andrew also nationally consults for other lawyers in high-profile self defense cases, teaches self defense law at the SigSauer Academy in Epping, NH, is frequently a featured speaker at law school gun law symposia around the country, and provides legal expertise for such news outlets as the Wall Street Journal and NPR. This year Andrew will also be speaking at the 2014 NRA Annual Meeting on Stand-Your-Ground and other facets of self defense law.

Andrew began his competitive shooting activities as a youth in smallbore rifle, and has for 20 years been a Life Member of the National Rifle Association (NRA) and a multi-classification Master-class competitor in the International Defensive Pistol Association (IDPA). He has for many years been an NRA-certified firearms instructor in pistol, rifle, and personal protection, and is a a life-long absolutist for the right to carry firearms and the Second Amendment generally.  by Andrew F Branca