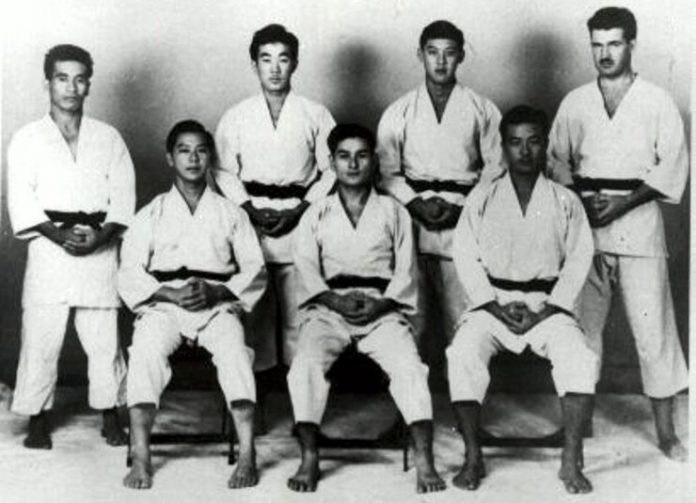 Paul Yamaguchi was born in Honolulu, Hawaii in 1925. He studied judo and Danzan Ryu Jujitsu under Henry Seishiro Okazaki, the founder of the Danzan Ryu Jijitsu.

Paul was one of the James Mitose original students in the early 1940s when classes were taught at the Nuuanu Y.M.C.A.. Paul eventually became one of James Mitose’s Black Belts. Mitose’s first Black Belt was Jiro Nakamura, then came William K. S. Chow, then Arthur Keawe, then Edward Lowe and finally Paul Yamaguchi and Thomas S. H. Young. James Mitose initially called the art he taught “Kempo Jiu-Jitsu” and later changed the art to “Kenpo Jiu-Jitsu”, but his style was ultimately called Kosho Shorei-Ryū Kenpo.

Paul Yamaguchi studied under and with other instructors including William K. S. Chow from whom he got another Black Belt. He also studied with Okinawan instructor’s Oshiro Sensei and Miyashiro Sensei, Mitsugi Kobayashi, and Bobby Lowe, with whom Paul taught.

Paul organized his own school sometime after Mitose stopped teaching in 1953. His school closed it in 1957.

Paul Yamaguchi eventually moved to the island of Kauai to live.

Gene Ching - January 29, 2017
We use cookies to ensure that we give you the best experience on our website. If you continue to use this site we will assume that you are happy with it.OkRead more