Many systems of kung fu were developed by mimicking various animals. maybe I should create a style of American kung fu. Maybe I’ll call it Pit Bull Kung Fu.

I’m African American by race and heritage with a healthy dose of Cherokee Indian and Caucasian thrown in the mix just for flavoring. In a word I’m either a mutt or an American hybrid, according to your outlook. Mixing various breeds in the animal kingdom often creates a stronger result. A mutt or a mongrel among canine breeds a healthier and more resilient animal. Mix a tiger and a lion and the offspring is bigger and stronger than either. In other words the whole is greater than the sum of its parts. Sounds good anyway. How it actually translates into reality is in question but it seems reasonable to me. Of course though I was a biology major early in my college career genetics was never my strong suit so don’t quote me on it. 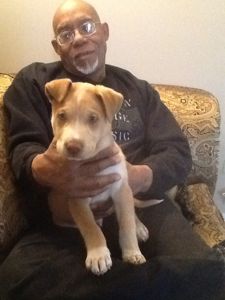 Considering my Native American and African heritage I’m thinking maybe I need a totem. A totem was an animal guardian or guide that described the personality of the recipient. Similar practices were inherent in both cultures. To a greater or lesser degree they probably still are. In each instance a young warrior chose or was given an animal totem that best expressed who he was or saw himself to be.

Now, to choosing a totem. I have always admired the strength and power of the leopard. I also like the idea that they have been known to occur with a jet black coat. Though I’m a long way from being jet black I am considered black by American standards so I relate to that. Also pound for pound the leopard though one of the smallest is the strongest of the big cats. A leopard can kill a gazelle that weighs quite a bit more than himself and muscle it into the safety of a large tree. That alone is reason enough to admire the prowess of this magnificent animal. Had you asked me a few years ago I may have chosen this animal as the one that I most related to.

I’m an animal lover and since my wife won’t allow me to have a leopard I’ve opted for dogs as my pet of choice. For the most part my taste lean to Doberman Pinschers and pit bulls. Both are courageous and tough as nails. I’ve just acquired a pit bull puppy recently. He’s as cute as he can be but he has that typical pit bull temperament. He’s seven weeks old and already thinks he’s tough. My sister and her husband have a hundred pound monster of a pit and wouldn’t you know it? My puppy is spoiling for a confrontation with him. It would be cute if it wasn’t such a recipe for tragedy. Drake could swallow my little Rocky without having to chew first. At about ten pounds Rocky is long on courage and short on good sense.

Many systems of kung fu styles were developed by mimicking the movements, temperaments or fighting prowess of various animals. I’ve studied two styles of kung fu based on animals. With about forty five years of experience in various martial arts I founded an eclectic system that takes into account those styles. Using Okinawan kempo as the foundation I have dedicated over ten years to trying to perfect the system. I’m thinking now that maybe I should create a style of American kung fu. Maybe I’ll call it Pit Bull Kung fu system.

Actually I’m kidding. I don’t have another system in me. I don’t have the time or energy to dedicate to such an endeavor but we could learn a valuable lesson from the courage and tenacity of the pit bull terrier. A pit bull will tackle an animal five times its size. Like all bull dogs they were bred for bull and bear baiting. In more modern times they have been used for pit fighting.

Shortly after leaving the military I fought in a series of no-hold-barred or pit fights. They were illegal affairs that took place in old ware houses, on barges, in barns or wherever else they could be done away from the attention of the law. There were small purses but the real money was made with side bets. Most of the fighters were more like street brawlers and alley fighters than liked skilled martial artists. Even so the fights were nasty and often brutal. Many times the fighters just stood toe to toe trading punches. Usually the one who was most willing to endure the abuse won the fight. More often than not that describes the average street confrontation or bar fight. They don’t last long but they can be violent and bloody.

Fighting isn’t like sparring, even full contact sparring isn’t realistic. Even with martial art training fighting is in your face and direct to the point. Animals perfect the techniques that we try so hard to mimic. Pit bull terriers are a case in point. They won’t back down from anything. One will get hold of a much bigger dog, close his eyes, spread his legs and hold on. They’ll take the necessary abuse if it means winning the fight. Most of us are unable or unwilling to make that kind of commitment in a fight. We aren’t willing to suffer the pain or shed the blood even when that’s what’s necessary to come out victorious. Real combat takes total commitment. Should we chance to find ourselves in a life and death confrontation we could learn from the pit bull. He has a do or die mentality that often gives him victory against seemingly insurmountable odds.

Back to our new system of kung fu. It would have no defensive techniques. No blocks or parries. No body shifting or foot work. Instead it will practice only head on offense and direct attacks. Iron vest chi kung training might be useful since punishment will be the rule rather than the exception. It works for pit bulls. Why not for a kung fu fighter? Actually, I question the practicality of such a system. If you’ve seen the result of a dog fight you’ll understand why. They’re bloody affairs that few of us would want to emulate.

So my pit bull kung fu system leaves something to be desired but we can learn something from this tough little animal. When all else fails in a fight courage and pure tenacity will often be the key to victory. That same mentality translates well into many areas of life. When faced with adversity put on your pit bull persona. It may not guarantee victory but it may give you your best shot.

Will the real pit bulls please stand up? “Who let the dogs out?” Come on, my brothers. Time to represent.

God bless you, my brethren. Train hard and go with God.

Donald Miskel - April 25, 2021
We use cookies to ensure that we give you the best experience on our website. If you continue to use this site we will assume that you are happy with it.OkRead more