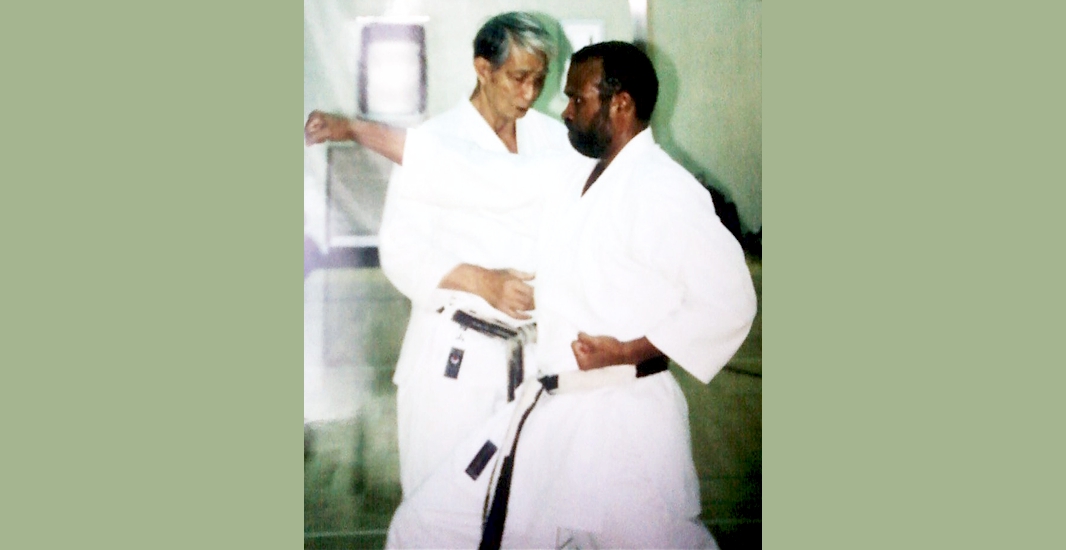 Ricardo Johns was born in the former Panama Canal Zone. He began his martial arts training at the age of 14 under his Sensei, Vincent Cruz, who studied under Osai Obata, who was a direct student of Master Qichin Funakoshi. Sensei Cruz was a Staff Sargeant stationed in the Canal Zone at that time and was teaching karate at the Albrook military base. Hanshi Johns was the youngest student in the class, and in those days the training was vigorous, demanding, and intense. but he never gave up on his desire fto become a great martial arts practitioner. He practiced arduously, pushing to the limits of his endurance in his quest to emulate his Sensei. Because of Ricardo Johns’ strong spirit and hard work, he was selected as a member of the Panama national karate team in 1967 and the team took first place. In 1968 and 1969, he won Kumite Grand Champion and went undefeated. He trained under Vincent Cruz for five years and was his uchideshi before his Sensei Cruz was redeployed back to the United States, leaving Johns with the technical responsibility of passing on the Shotokan system to the students in Panama.

Sensei Ricardo Johns began teaching the youth of his community in his father’s garage, and eventually opened his first dojo at the Pedro Miguel Gymnasium. He was an extremely hard instructor, his students would say, very demanding, expecting nothing but the best from them. The way he taught proved to be very effective as his students were extremely successful and considered to be tough opponents. He was also Head Instructor for the Panama National Guard with the responsibility of training the national forces that protected the late General Omar Torrijos of Panama. Hanshi Johns was very influential in his community and played a major role in the successes of many of his students.

In 1971, Sensei Ricardo Johns traveled to the United States and enlisted in the United States Army and during his six years of service, he continued his martial arts training in the different parts of the country. He returned to Panama in 1974 and re-opened his dojo in Pedro Miguel and another dojo in the City of Panama. He returned to the United States in 1980 and officially founded the Dai-Ichi Shotokan Karate-Do Association in order to develop a teaching method specifically designed to develop the mind, spirit, and improve physical well-being for his students. To achieve this, he travels throughout the United States, Central America, and Europe where he is invited to give seminars and coach the USA Karate National Team.

Today the Dai-Ichi Shotokan Karate-Do Association is comprised of dojos (karate schools) in the United States and Central America. It is a nationally and internationally recognized organization and highly respected in the martial arts world. He established the Dai-Ichi Summer Camp as a way for instructors and students to train together to maintain their high technical level, to increase the spiritual aspect of Karate-do, and to promote and foster sincere and true goodwill amongst our fellow budokas.

Sensei Ricardo Johns vision and long-term goal is to see each of his students succeed in life and become productive citizens in society and to see the Dai-Ichi Shotokan Karate-do Association as a leading force in the spread of the true essence of Karate-do. With his many years of experience, dedication, sacrifice, and lifetime commitment to the teachings of Karate-do, his vision is becoming a reality.