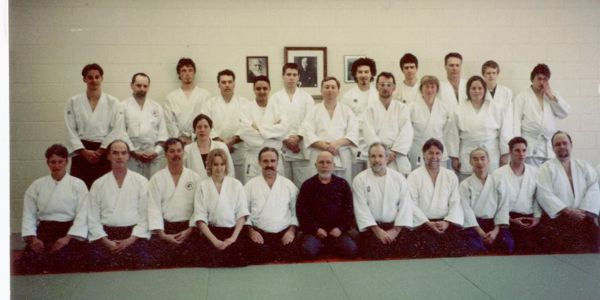 Aikido As Political Theory
Time out of mind, martial arts have been practiced by aristocrats and by thugs. Middle-class people, concerned with cost accounting, profit and loss, have had little use for them on the whole, preferring to hire others to do their fighting for them. But young males on the margins of law and the economy have cultivated fighting prowess as a form of skilled labor, as a pre-requisite of illegal enterprise, and as a route to self-esteem and status. (Read Article)

Richard Ostrofsky Aikido As Conflict Management
The name, ai-ki-do, means roughly “the way of unified or harmonized spirit.” Unlike many other fighting arts, it is not a sport. In fact, one of the basic ideas of aikido is that competition has no place in combat. What the aikidoist never does is square off with an opponent for a fair contest to see who is the better man. Aikido works on a completely different paradigm: In a real fight, there is always one person who is attacking, and another who is being attacked. The theory of aikido is that the attacker (by definition) is over-reaching himself – going outside his proper sphere and putting himself off balance. Therefore, in committing an act of aggression, he is really defeating himself.  (Read Article)

Richard Ostrofsky On the Principles of Aikido
You can’t learn much about aikido just by reading. Many hours of practice and experiment are needed before the ideas presented here will have much meaning. On the other hand, almost from the outset, it may be helpful to have certain concepts in mind as you practice. Accordingly, what I attempt in this paper is to pull together the basic ideas and principles of this art to orient beginners during their first few years of training. I do not attempt to explain specific aikido techniques; such descriptions are readily available elsewhere. (Read Article)

Richard Ostrofsky Aikido As Philosophy
In their encounters with life, thinking people of all times and places have asked the same Big Questions, offering different answers in keeping with their received concepts, their cultures, and their life-situations. In modern English, we might phrase these questions so . . . (Read Article)

A recent cover of Esquire magazine showed a powerful-looking man in two versions, standing next to himself. On the left, he was dressed in a white cowboy suit, with black boots, gun belt, eye-mask and ten-gallon hat: plainly that folk hero of my, and everybody else’s childhood, the Lone Ranger. The incarnation on the right wore a white karate gi and a Black Belt. We were to see that the pop images of cowboy and martial arts expert derive from the same archetype, the same basic human possibility, manifested in two very different cultures. (Read Article)