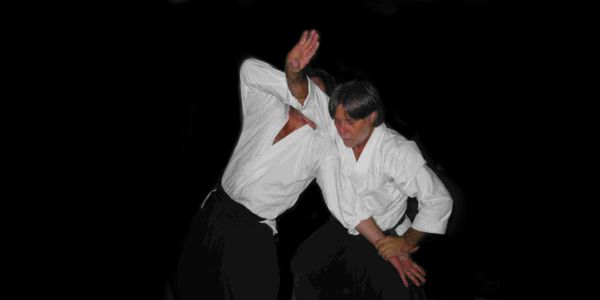 The name, ai-ki-do, means roughly the way of unified or harmonized spirit. Unlike many other fighting arts, it is not a sport. In fact, one of the basic ideas of aikido is that competition has no place in combat. What the aikidoist never does is square off with an opponent for a fair contest to see who is the better man. Aikido works on a completely different paradigm: In a real fight, there is always one person who is attacking, and another who is being attacked. The theory of aikido is that the attacker (by definition) is over-reaching himself going outside his proper sphere and putting himself off balance. Therefore, in committing an act of aggression, he is really defeating himself. The problem is to help him to realize this: to help him see the error of his position preferably without hurting him or, at any rate, not hurting him more than necessary.

Aikido is sometimes called the pacifist’s martial art, but this is not quite correct for two reasons. First, you cannot practice your beautiful aikido techniques unless someone cooperates by attacking you and letting you throw him around. The only reason anyone will do that (until you get to be an old instructor like me) is that you are doing the same for him. Accordingly, in a real aikido class, you will spend as much time practicing attacks as defenses against those same attacks. Second, it turns out that the skills of attack and defense are very nearly the same. The movements of a really good attacker are fluid, flexible and focused. Neither the attacker nor the defender knows what is going to happen next. Both must be alert, relaxed, present to the situation, ready for anything. Actually, the whole physical fitness side of aikido training is in the rhythmic drill of attacking, getting thrown, rolling out and up on your feet, and then attacking again. The better the other guy is, the less he actually does!

Another important thing to understand is that for the aikido practitioner, physical combat is only the extreme version of a situation that happens all the time. I have been practicing aikido for thirty years, have never really used it in the street, and never expect to not even when I go back to New York City (where I grew up) for a visit. But I use the ideas of aikido constantly when I fight with my wife or with anyone else whose ideas and interests happen to differ from my own. Jesus taught that we should love our enemies. Ueshiba, the founder of aikido, might have added that no one can do this until he has become very skillful at handling conflicts with his friends. An old Japanese proverb says that Amateur tactics cause grave wounds. A real pro handles a conflict situation. He can deal with aggression and violence without becoming aggressive or violent himself. That is why it is entirely appropriate to introduce a potentially lethal fighting art like aikido into a workshop like this one on peacekeeping and conflict resolution.

Richard Ostrofsky - January 30, 2017
We use cookies to ensure that we give you the best experience on our website. If you continue to use this site we will assume that you are happy with it.OkRead more