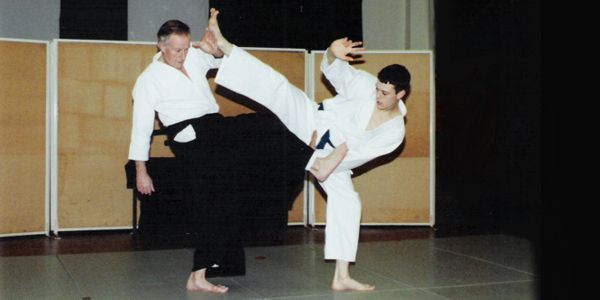 Introduction
In their encounters with life, thinking people of all times and places have asked the same big questions, offering different answers in keeping with their received concepts, their cultures, and their life-situations. In modern English, we might phrase these questions so:

All these questions figure prominently in Western philosophic and religious traditions; and aikido philosophy touches upon them too, in its own way, and from the tradition that influenced its founder. While there is nothing the aikidoka is required to believe regarding these questions, there is much that our practice suggests. One thing that thirty five years of aikido has suggested to me (being a bookish sort of animal) was a fair bit of reading in the Taoist, Zen and Shinto traditions behind our practice, and in some relevant Western philosophy both classical and modern. Finally, these efforts left me with the problem of reconciling two very different educations, Eastern and Western, on the mat and off, and working out my own commitments.

I say commitments (rather than beliefs) to emphasize that my conclusions need not be yours. A belief is a belief that something is true; and what is true is supposed to be true for everyone. A commitment is merely a promise (perhaps only to oneself), that one intends to keep. About ideas, it is a thought one firmly holds, and that one leans on as a basis for choice and action. In aikido we speak a lot about keeping one’s center, moving from one’s center, knowing where one’s center is. That may mean only the physical center of the body about two inches below the navel or it may mean the system of ideas and values that shape your choices and, in the long run, your whole life. Since people’s lives are legitimately different, my commitments need not be yours any more than the physical center of my body is yours. Still, as aikido demonstrates, interesting interaction even sharing between our centers is possible. In that spirit, I have written this piece, and you are kind enough to be reading it. Onegai shimasu! Let us practice together.

Two ground rules at the beginning: As already emphasized, these are personal reflections only. They are not meant to be authoritative either about aikido or the history of philosophy, and I brush lightly over subtleties in both. There would not be space here to do otherwise.

It should be mentioned too that I will not be treating aikido as authoritative on any of the questions considered here merely as one position among others. For this reason, I refer to our founder not by the title we give him o-sensei but by his name, Morihei Ueshiba. For our present purpose, he is not a portrait over the kamiza (shrine or altar) of the dojo, but a great man and thinker, now deceased, who lives on in the history of thought. Whether this is a demotion or the opposite is for the reader to decide, but in this piece I want to consider Ueshiba and his system on equal terms with other thinkers and systems. In the critical spirit of philosophy we’ll allow ourselves to question all the great teachers and teachings, saving any reverence we feel for its proper occasion.

Our present purpose is neither to learn aikido nor celebrate it nor even discuss it per se but to locate our practice in context with the historic conversation on perennial questions.