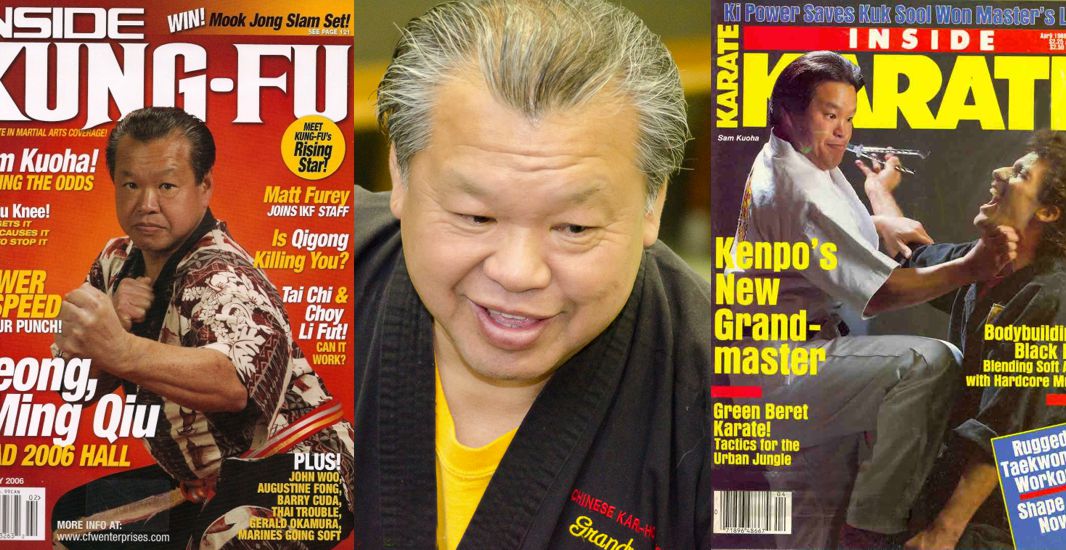 The worse case scenario in a fight is to be surrounded by a handful of people whose only purpose in life at that moment is to do you bodily harm. Preparing for that kind of situation is something that Grand Master Sam Kuoha teaches on a regular basis in his Kara-Ho Kempo system.

Although it’s unlikely to be attacked by such a large number of assailants, it isn’t unprecedented. In fact, according to Kuoha, statistics prove that those kinds of confrontations occur more frequently than people may realize.

“In San Diego County during the year 2001 more than 67 percent of the altercations involved three or more people,” Sam quoted. “That tells me that most of these fights found one person going against at least two, maybe three or more attackers at a time.”

One of the ways Kuoha prepares his students for such a situation is to train their minds and their reflexes so that if push comes to shove, his people will have the upper edge thanks to their training.

“If you only teach your students to fight against one person there is no way they will be able to deal with a multiple attack situation,” explained Kuoha. “I teach my students not only how to recognize the situation, but how to end the fight quickly. When you’re fighting one or two guys in the street there isn’t time for a lot of fancy sparring. You’ve got to put ‘em down with no more than two strikes.”

When Sam worked as a San Diego cop and Sheriff’s Deputy he, on more than one occasion, had to deal with situations that involved multiple attackers.  Once during a riot Kuoha found himself alone in the middle of 150 people during a riot. Thanks to his unique style of self defense, the score at the end of the fight was always, Kuoha 1 bad guys zero.

“When I was a copy cop in Logan Heights, one of the toughest neighborhoods in San Diego, you never fought just one person,” recalls Kuoha. “When ever I got into a fight there it was always against three or four guys. A lot of my cop pals would get smacked down from behind, but because of my training I was always aware of where all the attackers were and was able to deal with them before they could overwhelm me.”

The 58 year-old Kuoha places great value on being able to “read” your opponent then acting quickly to whatever it is he or she is doing. He says this is done through extensive training of Ki principles.

“Always watch their eyes,” says Kuoha. “For example if you’re being approached by three guys, pay attention to where their looking. If they are glancing around to see if anyone is watching that’s a bad sign. Notice if they’re checking you out. Generally if they tighten their lips or their eyes get narrow or squinty, that’s a sign that something’s about to go down.

“Are they walking in such a manner as to cut off any escape route you may have, or are they flanking you? These are all bad signs. At this point it doesn’t take a rocket scientist to figure out what’s coming next.”

According to Kuoha it’s vital to keep a clear head in such a situation and to know how to best position yourself to set up your attack and where to strike first. Kuoha emphasizes that it’s imperative to attack first. He theorizes that the gang has already initiated an assault by surrounding you; therefore you are merely defending yourself and not starting a fight.

“I will never go after the guy in front of me,” said Kuoha. “If you go after him you’ll quickly be surrounded. It’s best to take out the guy to his left or right with a kick to the knee. Blow that knee out with the first strike. That usually startles the others and in that split second I’ll execute a number of soft tissue strikes to the eyes, throat and groin. Always moving, that’s the key to fighting in a crowd, never be stationery and whatever you’re doing, do it fast.

“Professor Chow would always say, ‘Keep that head moving, stay light on your feet and never be in the same place twice. This is not a time that you worry about stances, because there won’t be any at this point. Remember, a moving target is hard to hit.’”

Fighting multiple attackers-Ho style is akin to playing billiards. A good player’s goal isn’t to merely put a ball into the pocket. To win an expert pool player must set up the following shot with positioning. According to Kuoha the same is true in a street fight.

“You’ve got to train how to set up your attackers to best take advantage of them,” says Kuoha. “Moving from one target to the next with maximum effectiveness requires a lot of practice; and like playing pool, you’ve got to know how to set up your next target. I also like to use aikido locking techniques to control attackers and to push them in front of each other.”

Another important aspect when it comes to defending against multiple attackers is in knowing what kind of technique is the most effective in a given situation.

“If you’re hitting someone in the hollow and you want to drop them straight down then it’s best to use a vertical punch in a downward motion,” said Kuoha. “If you want to drive them up and or backwards, the heel of the palm under the nose will do nicely.

Every technique has a purpose and that purpose is to control the mechanics of your attacker’s body.

“An elbow strike across an attacker’s body will turn him to the right or left side exposing his back. That opens up his kidneys or spleen. I like to use an open palm strike to move an opponent backwards, whereas a knife hand will drop a person right at your feet depending on the angle of the strike.”

Although Kuoha is well known for his powerful high kicks he doesn’t recommend such a technique in a street fight. He says if you want to kick someone in the head, give them a shot to the groin or knee bending them to your waist level. Then, kick ‘em in the head.

“A lot of our kicking techniques are done below the waist,” explained Kuoha. “We do high kicks because that’s what I used to do. High kicks were never in the Kara-Ho style, then one day Professor Chow saw me doing high kicks and said, ‘I like that, let’s develop those into the system.’

“I used to do taekwondo kicks, using a lot of hip action swinging my leg into the target. Professor Chow changed all that – In Kara-Ho we chamber all of our kicks, crank our head to see the target then execute a short snap-kick.”

The high kicking Kuoha says that his style stresses kicks to the lower part of the body, inside the thigh, the groin, the calves, the instep and especially the knee. Sam loves to “blow-out” bad guys knees. He says the most effective way to do this is to do a front thrust kick or a side-kick landing it about two inches above the attackers knee cap. Snap Crackle and Pop “ain’t” the sound of a breakfast cereal to Sam; it’s the sound of victory.

“Nothing puts the fear of God into a group of thugs like the sound of a snapping knee cap or the popping noise of a dislocated shoulder,” says Kuoha. “That sound plus the screams of the guy on the ground will make them think twice about continuing with the fight.

“Professor Chow always said, ‘If a guy was seven feet tall and you wanted to kick him in the head, forget it, but break his kneecaps and when he falls to the ground, then just step on his head…much easier and faster too.’”

While the breaking of knees may seem a bit harsh, Kuoha rationalized that if you’re in a fight for your life you don’t want anyone left standing upright. A punch to the jaw may or may not knock the guy out and if he’s still standing that’s one more attacker still in the equation. A more effective punch is one the temple; according to Kuoha that strike will in most cases put a person out. A slap to the ears is also an effective way to put a person on the ground taking them out of the fight.

“I teach my students the quickest and fastest ways in which to end a fight,” says Kuoha. “In that kind of a situation (facing multiple attackers) their lives are in danger and they have the right to defend themselves accordingly. Now if it’s a push-and-shove schoolyard bully kind of thing you don’t want to bust a person’s knees. There are better and safer ways to defend yourself in that kind of a situation. What we’re doing with the multiple attack training is for an entirely different kind of ball game.”

As students of Kara-Ho continue to learn and advance they develop skills to defend themselves against armed attackers as in addition to unarmed attackers.

“When someone pulls a blade weapon or club we look at that weapon merely as an extension of their arm,” says Kuoha. “Sometimes it’s a big extension, but with training, an attacker’s weapon can be turned against him, especially in a multiple attack situation.”

Kuoha agrees that the situation changes if that weapon is a gun. Only in the movies can a person dodge a bullet by bending and flipping over the speeding round. But there is a way to deal with such a situation.

“When you’re facing a person with a gun you need to be close enough to grab the weapon,” says Kuoha. “When I was a cop that happened to me and I got the gun away from the guy, but in most cases I suggest you just give up your wallet. If you do feel that they’re going to kill you no matter what, then you have to call upon your training, and I know that my black belts are trained well enough that they will prevail in such a situation.”

“Professor Chow designed the system for the street, everything else was secondary,” explained San Kuoha. “Even our forms are designed around street techniques, as are our weapons. We have stayed true to Professor Chow’s philosophy of ‘if it works keep it and use it, if it doesn’t get rid of it.’ And that’s what we’ve done. Keeping with Professor Chow’s wishes I continue to add techniques to Kara-Ho that will protect the lives of our students and loved ones if the situation ever arises.”