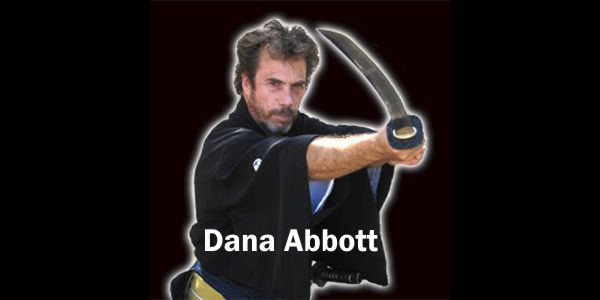 USADOJO.COM spent time with Shihan Dana Abbott discussing his unique training methods in the sword arts. We asked him about his training and the love he has for the sword and his goal to pass that love on to his students.

Shihan Abbott starting training in the mid 80’s. He spent more than 14 years in Japan training in the sword arts under the tutelage of Abe Hanshi and Shizawa Sensei masters in kendo, and Tanabe Kaicho and Tabuchi Hanshi masters in Goshindo and Toyama Ryu. These men are considered the very best in the professions. He attended Nihon Taiiku Daigaku, a Martial Arts Education University in Tokyo, which produces some of the strongest kendoists in the world. Shihan Abbott was relentless in his pursuit of perfection which gained him the respect of his fellow students and the attention of his instructors. He trained and sparred constantly with hundreds of fellow kendo and iaido students during his martial education. Strike after strike, technique after technique Abbott spent 6 days a week from dawn to dusk training with a core group consisting of about 350 kendo students working on either their bachelors or masters degrees. 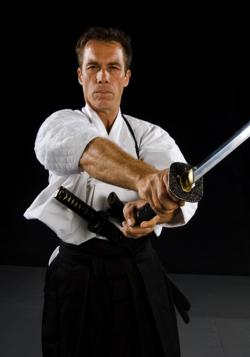 These students were the cream of the crop. Throughout Japan all the best kendo students apply for acceptance to enter NI Tai Dai to further their education. Those that were fortunate enough to be accepted and graduate have the honor of becoming members of the police and fire departments or the military or national school system. In the face of all this talent, Abbott met their challenge and persevered from novice to shihan, never tiring in his relentless pursuit of excellence in training. Another big plus for Dana Abbott was his fluency in Japanese, he had already traversed the language barrier.

Japanese kenjutsu is one of the last places where man can test his skills in the ultimate game of physical chess. In this martial art you do not have to be huge in body to maintain the upper hand. The sword knows no fear and when wielded by an expert it can cut down any opponent no, matter their size. Shihan Abbott’s teachers pushed, prodded, hit, struck, cut, and pounded every weak spot they found in Abbott. It was not unnatural for students to urinate blood when training excessively hard. His instructors saw in him a mirror of themselves and did everything possible to improve his skills. Watching Shihan Abbott in action, you see that his sword skills are tight, clean and worthy of a shihan who has been living the spirit of the sword for 25 years.

Meet him today and you are also taken by his unending energy, quick mind and even quicker reactions. It is rare to find someone who can match him and even rarer to find anyone who can beat him in his arts.

Shihan Abbott, a Black Belt Hall of Famer, returned to the United States with one goal in mind, to create the ultimate in personalized training programs for his students through his company Samurai Sports.

His love of teaching is reflected in his no-nonsense, step-by-step approach that makes it easy for anyone to learn the sword, and he brings these honed skills to his students in individualized, unique and specialized training both in the dojo and as he travels throughout the United States doing the same for seminar students and school owners.

There are teachers of the sword that are not highly qualified. Shihan Abbott is not one of those instructors. He has been formally trained in swordsmanship and has gone the extra mile and learned the Japanese language as well. He not only talks about the fundamentals, he practices them. He has had years of practical experience and is profoundly knowledgable. “When choosing an instructor,” he says, “be aware that one is only as proficient as their training allows them to be. Don’t hesitate to check certifications”.

As a teacher, Shihan Abbott’s training brings his students closer to the sword both physically and mentally and his students can wield a sword traditionally and correctly as it has been done for centuries.

Abbott has many ways of teaching the sword to his students depending on their preferences. Many like the formalities and kata pre-arranged forms so Shihan Abbott teaches them a traditional form of Iaido known as Toyama-ryu and the Kendo Seitei series just to name two. Iaido is the art of drawing the sword, cutting an object and then returning the sword to its sheath. 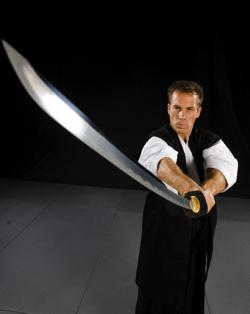 Shihan Abbott’s classes allow his student to put their knowledge into action, fighting, sparring and using technique at full speed. He teaches his students the way he was taught, training the body and mind with correct breathe control, balance, timing, and speed and he teaches them to win!

Test cutting is one important part of learning the Japanese sword. If the student does not learn to cut correctly, he is at an extreme disadvantage. Along with correct cutting, Abbott’s students learn all the subtleties of handling the sword, including preparing tatami mats for cutting and all the proper protocols and rituals. They master happogiri, the basic 8 cuts, and also rokudan giri.

Shihan Abbott requires his student to become proficient in all Japanese sword types including short Japanese military swords, tanto and naginata. “There are many sizes and lengths of blades”, Abbott says, “and if you don’t experience each you really can’t understand their cutting dynamics.” Each sword has a unique use and purpose and his students learn them all whether steel, wood, or bamboo. Shihan Abbott’s greatest desire is to help each of his students find their path to perfection. He was trained to be an instructor, and educator and to impart to hisstudents his proficiency with the sword .

Shihan Abbott has authored several books, including his recent release of The Samurai Sword: Introduction and Application. He also recognizes the changing face of training in today’s technological world, and will offer his training manuals on the long and short sword to be re-released to coincide with Samurai Sports online training program scheduled to roll out in early 2010.

Shihan Dana Abbott is one of the few who answers his own phone and he truly cares about his students, putting forth every effort to ensure the best training available. For more information about training with Shihan Dana Abbott and about Samurai Sports, you can call him at 800-748-4084 or visit the Samurai Sports website at www.samuraisports.com or email Shihan Abbott at shihan@samuraisports.com.

What are the Best Weapons For You?