Senior Safety –  Teaching Seniors To Fight Back in Bladensburg

by Bobby Jones, Staff Photojournalist dcmilitary.com When it comes to crime, particularly robbery, assault — and sometimes unfortunately, worse — it would seem some of our most vulnerable citizens would be our senior citizens. Dr. Clifford Thomas is a senior citizen for whom an unsuspecting, would-be robber would be best served to not run into in a dark alley, due to his extensive years of training in several disciplines of martial arts since 1964.

“As a senior citizen, you shouldn’t have to peer out your window from between blinds and be afraid. I want seniors to be able to take care of themselves,” said Thomas, a 10th-degree black belt.

On June 8, Thomas, CEO of We Lead By Example Inc. — Tae Kwon Do Ramblers Self-Defense Systems, held a free senior safety and self-defense workshop to teach safety and practical self-defense methods for senior 55 years and older at the Bladensburg Community Center.

In cooperation with the Maryland-National Capital Park and Planning Commission, Department of Parks and Recreation Northern Area, Thomas welcomed more than 20 seniors to the three-hour session.

The 6-foot, 2-inch tall, 200-plus pound martial artist uses a walker as he waits on pending knee operation. However, don’t be misled by the seasoned instructor’s ability. At the beginning of the class, Thomas shared a recent incident from a couple of weeks ago.

“I was at the service station pumping some gas when a couple of young teenagers ran up on me and one said, ‘You know what this is.’ I said, ‘No, what is this?’ ‘We’re going to rob you and then beat the crap out of you,’” Thomas relayed.

Thomas realized that they saw him as helpless and defenseless, and especially vulnerable because he was using a walker. “I told the boldest one that I would dismantle a certain part of his anatomy and make him eat it,” said Thomas. Fortunately, the commitment in Thomas’ voice was enough to scare them off.

“None of you have to be afraid,” added Thomas. During the demonstrations, he enlisted the help of Susan McCutchen, one of his second-degree brown belt students and Tae Kwon Do Ramblers Self-Defense Systems program coordinator, to expose senior citizens to the natural weapons they have at their disposal, such walking canes, purses and fingernails. The “street smart” techniques will enable them to protect themselves against crime and increase their chances of survival. 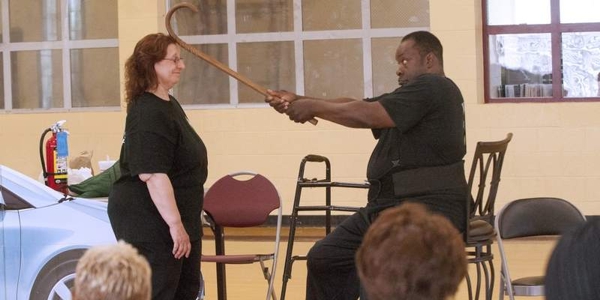 Dr. Clifford Thomas uses a cane to strike a “would be” attacker across the head during a senior safety and self-defense workshop to teach safety and practical self-defense methods for seniors 55 years and older at the Bladensburg Community Center on June 8, 2015. Thomas said older adults with canes or walkers are often seen as defenseless, and it is imperative to teaching seniors to fight back.

Thomas also showed the motivated seniors different striking techniques they could deploy against an attacker, including using their cane to break collar bones, jabs to the solar plexus and groin, block punches and trip the assailant to the ground, before making a hasty retreat.

“You only have two seconds to act. The first is when the moment they attack you and the second is when you retaliate or try to escape,” said Thomas.

Once a safety director and head of the emergency response locally, shared home safety tips on how to use a fire extinguisher in case of fire.

“Many of you think you know how to use an extinguisher, but if you have a ring of fire surrounding you, you’ll probably panic, especially if you have Alzheimer’s or dementia. You should be more concerned, though, with having an escape plan rather fighting a fire,” said Thomas, who has a degree in engineering and environmental research. “Self defense is not always physical,” said Thomas, I need to know how to defend myself if my house catches fire.”

Thomas also introduced pickpocket scams and purse-snatching scenarios to the audience to help them in safe guarding their valuables and identity theft.

The session concluded with invited guests from the Bladensburg law enforcement community who came out to inform the residents about other resources available. For more information about future events contact Thomas at 202-251-1030 or send an email to tkdram blers@yahoo.com.