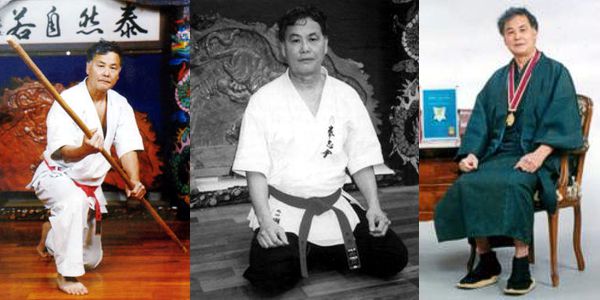 Tetsuhiro Hokama is 10th Dan Hanshi, President of the Okinawa Goju-Ryu Kenshi-Kai Karate-do, Kobudo Association and founder of the first Karate museum in the world. Although he is not as well known in the United States as are other Okinawan Goju-Ryu teachers, Hanshi Hokama is one of the most knowledgeable Goju-Ryu Karate masters. He has a deep understanding of the “Old Ways” of Karate.

Tetsuhiro Hokama was born in Taiwan in 1944 to Okinawan parents. Hanshi Hokama began karate as a child in 1952. His grandfather Seiken Tokuyama taught him the fundamentals of Shuri-te Karate. In 1961 his formal training began at the Naha Commercial High School Karate Club. That same year he began training with the legendary Seiko Higa (1898 -1966) a student of Kanryo Higaonna (1853-1915) and Chojun Miyagi (1888-1953). It was at Higa’s Dojo where he met Kobudo teacher Shinpo Matayoshi (1922-1997) and began learning Kobudo, Hakutsuru ken (White Crane fist) and Kingai-Ryu, a martial art that his father, Shinko Matayoshi (1888- 1947) learned in Manchuria.

Upon the death of Seiko Higa in 1966, Hanshi Tetsuhiro Hokama continued his training with one of Higa’s top student Seiko Fukuchi (1919-1975) who was Seiko Higa’s assistant instructor. It was both of these great masters that taught Hokama the Kakushite (hidden hand) referring to the secret techniques in kata. A young Tetsuhiro Hokama was not convinced with the bunkai he was first being taught, he kept asking questions and even doubting the kata applications. Seeing the young Hokama’s eagerness to learn, they began to teach him the “Old Ways”. Higa eventually gave Tetsuhiro Hokama a copy of the Bubishi, an ancient martial arts text and told him to study it deeply.

Tetsuhiro Hokama Goju-Ryu karate is of a quality that will amaze even the most experienced karate practitioners. His speed and power is inspiring and his knowledge of vital points is vast. He is a researcher of the history of the indigenous Okinawa art of self-preservation known today as Karate and Kobudo. Hanshi Tetsuhiro Hokama is truly a master of the “Old Ways”.

In a typical training session at his dojo you will see a very complete system of Goju-Ryu Karate being taught. Tuidi (grab hand), Kyusho-jutsu (vital point’s art) and Kobudo are a part of the daily regimen. The Kenshikai organization has perhaps the oldest Goju-ryu kata and the most complete curriculum in existence today.

Grandmaster Tetsuhiro Hokama set up a Karate museum in his dojo in 1987 to help people understand the history, culture, and philosophy of Okinawan Karate and Kobudo. More than 300 items are displayed. Hokama Sensei comments that karate is one aspect of Okinawan cultural pride. He puts great effort in teaching and building his museum collection, helping to spread the way of Okinawan Karate throughout the world. His vision is to get a building for the museum.

Grandmaster Tetsuhiro Hokam appeared in the Learning Channel documentary “Top Ten Martial Arts”. He has been featured in many foreign magazines – proof of a very good international reputation. He welcomes all to come and visit the museum.

USAdojo - October 4, 2010
We use cookies to ensure that we give you the best experience on our website. If you continue to use this site we will assume that you are happy with it.OkRead more