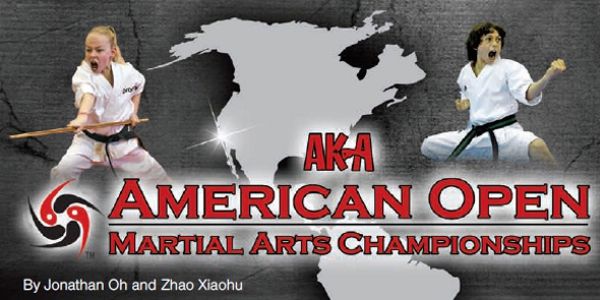 The West Coast was treated to a new martial arts tournament this year. On September 10 and 11, 2010, Joe Ellis and family presented the AKA American Open at the Town and Country Resort and Convention Center in San Diego, California. Joe Ellis, father of national champion Jacob Ellis, brought together many of America’s leading martial arts organizations to sanction this event, including the American Karate Association (AKA), the Bay Area Sport Karate Association (BASKA), the International Martial Arts Counsel (IMAC), the North American Sport Karate Association (NASKA), Sports Martial Arts (SMA) and the Tournament Promoters Association (TPA). If that seems like a lot of karate and little Chinese martial arts, well, it is. There are numerous regional and national karate organizations that promote tournaments, but few organizations from the Chinese styles in America. The AKA American Open made a determined effort to court Chinese-style practitioners by offering several Chinese style divisions. 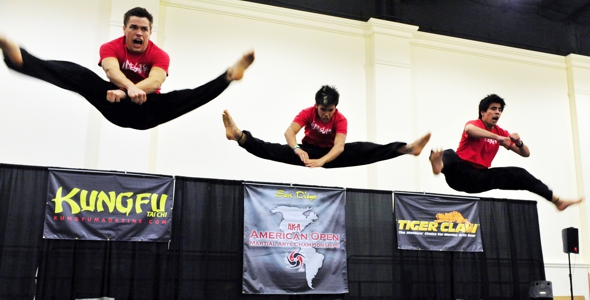 It was difficult to tell that this was the first year of the AKA American Open event. The staff was well trained and registration and administration went very smoothly. The event was run with the help of many heavy hitters from the tournament promoter circles including John Sharkey (AKA Grands), Dennis Brown (US Capitol Classics), Mohamad Jahan-Vash (Compete Nationals), Greg Beaver (Lonestar Open), Steve Cooper (Long Beach Internationals) and Mo Ota (Orange County Open), GM Ho Dai Luong, Master Carrie Wong and Sifu Fong Evens from the Jing Institute of Chinese Martial Arts and Culture. Judges and volunteers went through training seminars leading up to the event so everyone was on the same page when it came to judging and scoring. The event stuck to its schedule and finished on time. The AKA Open is the type of event we choose to work with and appreciate when this caliber event comes along, commented Cooper, the CEO of SMA. The tournament circuit needs more events like this events that service the competitors needs and operate with state-of-the-art standards. The SMAA Sports Martial Arts Association is proud to welcome and congratulate Joe Ellis and the AKA Open into the tournament world. 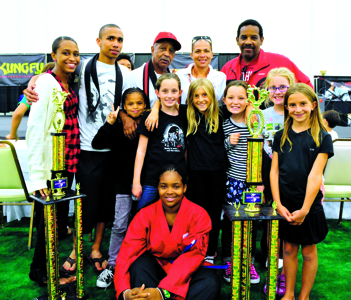 The evening show at the AKA American Open was a special treat. On stage to start the show was the Swideswipe demo team (of America’s Got Talent fame). Later Kung Fu Heroes (who also appeared on American’s Got Talent) and Mike Chat’s XMA demo team also wowed the crowd. This was all intermixed with top-level Grand Championship run-offs. It made for a spectacular evening show that was the perfect mix of show, demonstration and competition. I have attended tournaments all over the world, said Dennis Brown, who was featured on the September October 2010 cover of Kung Fu Tai Chi. Some are great. Others are not so great. I was very impressed with the AKA American Open. For a first-year event, Joe went out of the way to make sure to have the best facilities and put on a first class event. The Inaugural AKA American open was a well run and coordinated event. It was an all around first class event enjoyed by participants and spectators alike said Mohamad Jahan-vash.

If this debut event is any indication, the AKA American Open will continue to grow each year. The location is wonderful, the tournament is well run, and, judging how the first one went, we can expect more surprises next year. Just hearing what other top promoters from around the country have to say, it is clear that the West Coast has another legitimate National Tournament. AKA American Open was amazing first event, commented Sharkey, President of AKA, or for that matter an event any seasoned promoter could be jealous of. Joe Ellis went the extra mile to ensure key elements that make an event worth attending as well as envious to others. The venue was amazing, the set-up was amazing, the awards were outstanding. The overall organization was just amazing. This event would be for sure the event to attend in 2011. You can only describe this event as ‘AMAZING’ in all areas.

Stephen Grass, Pete Salas, Leilani Salad, Jacob Pinto, Shahin Jahan-vash also won Grands during the day and were on stage at the the AKA American Open finals. Tyler Weaver and Jacob Ellis won the Synchronized event and also performed on the stage.