Earlier in this series, we established that at close-range blocking is highly unlikely to work (too close and too fast). We also covered that the kata motions now labelled as “blocks” in modern dojos, were never originally intended to be used as blocks.

The “x-block” is perhaps one of the most obviously flawed techniques should it be applied as a block. The most common modern interpretation of the movement is thrusting both arms downward to stop a kick or low punch. It is highly unlikely that this would work. Even if we do manage to get our arms to the opponent’s striking limb, it leaves the head dangerously exposed and, in the case of a kick, it is very likely to result in damage to the blocker’s arms. It is very unlikely that the warriors who formulated the kata would have even considered the use of such a technique. So if they weren’t using the motion as a block, what where they using it for?

As we’ll see, the motion now labelled as “x-block” has a number of differing applications depending upon the exact way in which the technique is performed and the context of the kata (what moves are before and after it). One of the first uses we’ll look at is using the “x-block” to strangle an opponent. 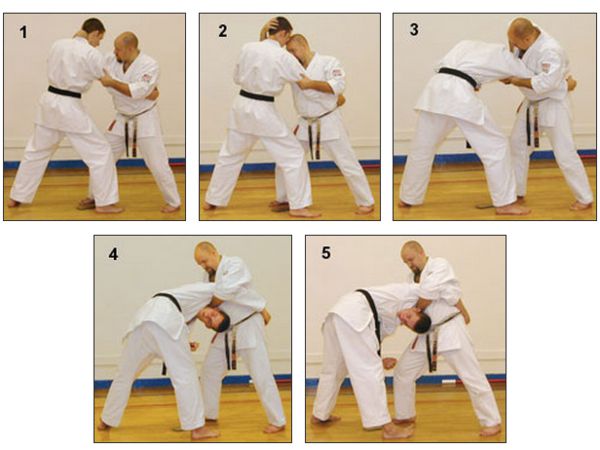 In the photo, you’ll notice that my body position is identical to the “x-block” in many kata. Also notice how the front stance prevents you from being easily pushed over and drops your weight into the technique. One of the basic rules of bunkai study is that the stance always serves a practical purpose and adds to the effect and efficiency of the technique. 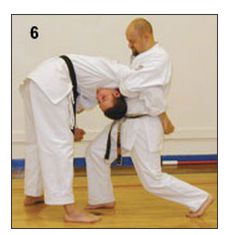 “X-block” is also often performed in kata from reverse cat stance. If we stick with looking at the motion from a strangling perspective, assuming reverse cat stance will drop the weight yet further, and although there will be some loss of stability, this is offset by the fact that the opponent’s posture is greatly disrupted and the effects of the strangle are increased (Figure 6).

Before we move on to look at some alternative applications for the motion, I’d like to quickly mention the role of the grip and the head-butt. One of the other keys to understanding kata is that they only record the vital core information. Supporting knowledge such as basic gripping skills and an understanding of the importance of disrupting an opponent prior to a technique (this time in the form of a head-butt) are generally not shown for two main reasons: Firstly, the kata were designed by fighters for other fighters. They therefore assume that such knowledge is self-evident and therefore there is no need to repeatedly record it. Secondly, the kata are summaries of fighting systems. Hence it would make little sense to repeatedly show the same ideas over and over and “swell” the kata for no gain. We’ll return to this idea later in this series. For now, it’s enough to understand that a basic knowledge of supporting methods and concepts are required as part of your kata / bunkai study. 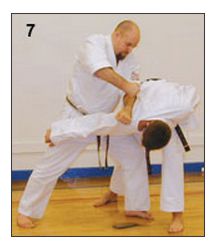 We’ve now seen two ways in which the “x-block” can be used to strangle an opponent unconscious (there are others). Another way in which kata makes use of the “x-block” motion is to maintain advantage and strike an opponent should they be bent at the waist (many of the kata motions preceding “x-blocks” position the opponent in that way). One hand seizes the opponent’s shoulder and applies a downward pressure. This will momentarily control the opponent’s motion and allow the other hand to powerfully and accurately strike the opponent on the base of the skull (Figure 7).

In Part 3 we’ve looked at some of the basic bunkai (application) of the “x-block”. There are of course other ways in which the motion can be used in a practical way. In Part 4, we’ll continue our exploration of basic bunkai and show how “x-block” can also be used to take an opponent to the floor and to lock up the joints of the arm.

The Basics of Bunkai – Part 4