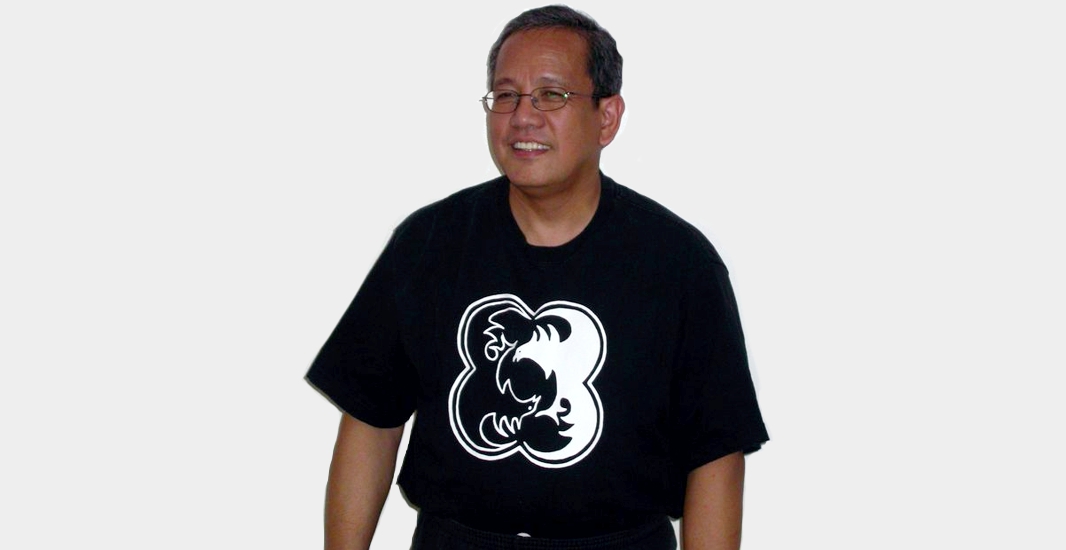 Born in the heart of Manila’s Chinatown, Master Rey Galang was exposed at an early age to the Chinese operas and legends of warriors and heroes that spawned and nurtured his love and interest in the martial arts. Having lost his father at an early age, Master Rey’s early pursuit of the martial arts was nurtured and encouraged by his uncles. Stemming from a family with a tradition and history of military and police career officers and Filipino-Chinese bloodlines, the discipline and demands of martial arts training became natural for him. Master Rey attributes his exposure to the martial arts, specifically Filipino and Chinese disciplines, to his family.

The general public has been unaware of Master Rey’s contribution to the organizations of Bakbakan, Lameco and Kali Ilustrisimo. He is the driving force and co-founder of the Bakbakan organization, the other being Master Christopher Ricketts. Master Rey officially named and registered the organization Bakbakan and also created its famous “double phoenix” or sabong (cockfight) symbol and “Matira Matibay” (Best of the Best) motto and logo. The first international exposure of Masters Antonio Diego, Christopher Ricketts and Edgar Sulite was with Master Rey’s 1986 groundbreaking project “Masters of Arnis” which featured these three as well as himself on a promotion and instructional tour in the cities of Sydney and Melbourne in Australia. From this early beginning, the public became aware of the arts of Kali Ilustrisimo and Lameco as well as of the Bakbakan organization.

It was also at this time that Master Rey Galang focused on making Bakbakan the organization into which it has developed. He standardized its ranking, certification and the classification of its arts. From the skills and knowledge gleaned from Bakbakan’s collective strength, the separate arts of Tulisan, Hagibis and Sagasa were born. As part of his effort to continuously improve and enhance the training methods and regimen of Bakbakan, the desire to create a scientific and progressive training method for the art of Kali Ilustrisimo resulted in its spawning a separate and distinct art now known as Bakbakan Kali (Ilustrisimo).

Identical in principles to its parent art, the art of Bakbakan Kali is different in its methodology, progression and training. Master Rey Galang developed a progressive and structured curriculum that has proven so effective that many of Bakbakan’s relatively new students can face-off and win in tournaments against opponents of many years experience. This has been consistently proven many times over through the years.

In a visit to the Philippines to train and compete with their counterparts, Bakbakan Kali disciples were surprised and pleased to find that they could keep up and hold their own against their more experienced Philippine brothers-in arms. This was a further proof of the value of the training methods developed for Bakbakan Kali. Always emphasizing the need for realism in training, Master Rey puts a high priority on training that develops reflex and realistic application of techniques. He shuns drill “patterns” judging them of little merit which only build false confidence. Never one to dismiss a good technique because of its origin, he will meticulously analyze it to discover or develop a method of training that will process the technique into a conditioned reflex.

As the official designated heir of the knife fighting aspect of Kali Ilustrisimo – Master Rey Galang developed it into its present form – the art of Tulisan. Among the handful of senior students of the legendary Grandmaster Antonio Ilustrisimo, Master Rey’s Tulisan reigns supreme in knife-fighting tournaments. His latest changes to tournament rules in knife fighting will further improve this aspect of the Filipino martial arts. Because of his disdain for the lack of reality in some of the practices in tournaments, he is constantly seeking for ways to put realism and practicality back on track. It is this unselfish passion for perfection that has endeared Master Rey not only to his students but even to his colleagues in the Filipino martial arts.

Master Rey Galang’s research into the unarmed combat arts of Asia and the Philippines has resulted in the integrated throwing and grappling art known as Hagibis. Master Rey holds ranks in the arts of karate, jiu-jitsu, judo and aikido. Despite the fact that he holds a high respect for the popular Brazilian form of jiu-jitsu, Master Rey nevertheless warns students that street encounters are rarely unarmed and one-on-one. Although throwing and grappling are practiced and part of Hagibis, the intent is to eliminate each opponent as quickly as possible by injury or otherwise and be prepared to defend against other attackers in an ensuing melee. Notwithstanding this, Master Rey still enjoys getting on the mat with his students and partakes in the benefit of what he calls “proof and discovery” journeys. He explains this simply as showing proof that a technique is truly learned and the discovery of things to do and not to do.

His organizational and instructional skill has become so well known in the Filipino martial arts community that many have sought Master Rey Galang for assistance. Included among these is Lameco Eskrima’s late Punong-Guro Edgar Sulite who sought Master Rey’s support and advice in developing the final structure of the Lameco Eskrima organization. He assisted in designing and naming Lameco’s grade and rank levels as well as the requirements for each category. He also designed the Lameco training “passport” booklet intended to keep track of a student’s workshop and seminar attendance leading to certification credits. The Lameco instructor ring is also one of Master Rey’s designs and it was at PG Sulite’s request that permission was granted for Lameco to additionally use Bakbakan’s logo and “Matira Matibay” motto on its ring. Master Rey also designed and edited Lameco Eskrima’s newsletter “Vortex” of which he was one of its major contributors. He is also in the second highest ranked (5th Degree) group of Lameco Eskrima instructors certified by PG Edgar Sulite, the highest, outside of PG Sulite himself, being held by only one person, Master Christopher Ricketts of Bakbakan International (Philippines).

Ever proud of his warrior heritage, Master Rey’s research into his province’s (Pampanga) legacy of Sinawali – the art of the twin blade, led him to many discoveries that he has shared in his book “Complete Sinawali”. Recognized and named by his peers in the Philippines as the developer and founder of the present form of Sinawali, Master Rey is proud to have preserved and enhanced this long neglected and misunderstood art. Proof of his love for this art can be found and enjoyed in the many Sinawali forms he has developed to preserve the history, culture and techniques of this fascinating and powerful legacy. He never fails to point out that many of the Espada y Daga techniques are actually gleaned from and practiced in Sinawali. In addition, he states that the legendary Placido Yambao, whose superior sword and dagger techniques are documented in the rare book “Mga Karunungan sa Larong Arnis” (Classic Arnis), hails from the province of Pampanga, the birthplace of Sinawali. Another obscure fact is that Joaquin Galang of the Magtanggol Sporting Club, a family member, awarded Placido Yambao’s instructorship diploma.

Many students preparing for competition find it a rewarding experience to spar with Rey Galang. He points out the weaknesses and strength of their strategy and repertoire and assists them in overcoming the flaws in their techniques or strategy. Whether it is weapons or unarmed sparring, Master Rey will make time to help a student “discover” his fighting ability. Sparring with students whose ages could be that of his own grown children, he gives his best to yield the best from his pupils.

Nonetheless, Master Rey Galang is not always that liberal in sharing his wealth of information and knowledge. Occasionally he has been known to pretend lack of knowledge, skill and interest to avoid teaching an individual he feels does not deserve to share the legacy. An astute judge of character, he has been proven many times correct in judging the selfish motives of an overeager candidate. By the same token, once a student has won his trust and confidence, the wealth of knowledge shared is limited only by the student’s own capacity to learn. Always learning and studying, he claims that sparring with his students keeps him on his toes as well as enables him to harvest their individual discoveries.

Acceptance into the Bakbakan membership is intentionally spread over a period of time in such a way that the wannabes are weeded out without any restrictive requirements. The interval between apprenticeship into associate status and the final full-fledged membership is customized to automatically discard those that are looking for easy and fast recognition and to extract the committed and dedicated practitioner.

Recent years have seen Master Rey Galang focusing on promoting and raising the standard of Filipino martial arts in general. His now celebrated annual tournaments have truly become “a Gathering of Warriors”. Held three times a year, the tournaments have appealing names such us “Masters of the Blade” – held in the first quarter of each year; “Guardians of the Legacy” – held around the middle of the year; and “A Gathering of Warriors” – held before the last quarter of the year. Master Rey Galang personally runs these tournaments, keeping track of each match as well as keeping a record of each participant’s track record regardless of style or school. He also maintains the web site where tournament participants can view their records and are kept informed of forthcoming events.

Until the opening of the Lodi gym a few years ago, the Bakbakan group was a “closed door ” group to outsiders – you needed to know someone in Bakbakan, and only by personal introduction and a screening period were you admitted into the brotherhood. This is a little relaxed now; admission is open to the public. However, the beauty of belonging to this brotherhood is that the screening process still exists in order to ensure that students are pure in their intent and free from egos. I have never met a more dedicated group of martial artists whose sole goal is self-perfection and the propagation of their art using Master Rey as their guide.